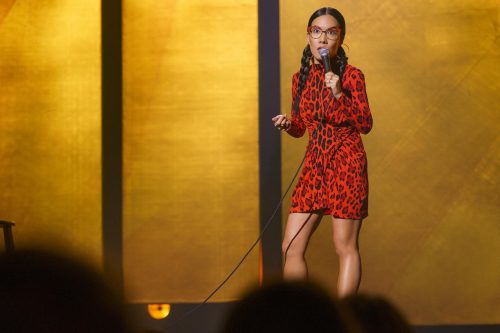 Keeping sellers of animal print dresses in business, and of course making many other cultural impacts, comedian Ali Wong is back! Wong has returned to Netflix, the home of her previous two specials “Baby Cobra” and “Hard Knock Wife” — this time, with her Valentine’s Day offering: “Ali Wong: Don Wong.” Filmed at the Count Basie Center for the Arts in New Jersey, the special glows with a warm golden hue from the tapestries behind Wong as she makes the new realities of her movie star life known, such as meeting all of “The Avengers” cast and fantasizing about Michael B. Jordan (Who doesn’t?).

Early on, Wong remarks “[her] life has changed dramatically in the past seven years,” following the busy success of her first two hit specials, roles in “Birds of Prey” and “American Housewife,” and her penned feature “Always Be My Maybe.” This latest special shows up deliciously on-brand with her signature enunciation and astute social observations that characterized the first two. Wong delivers in “Don Wong” with the reminder that Asian American women make for very powerful partners.

Forever challenging the stereotype of quiet and submissive Asian women, Wong spends the first 15 minutes diving straight into a dirty talk bit that happily indicates the NSFW recesses of Wong’s mind. The hilarity of unending vulgarities from a small Asian woman embellish Wong’s insights about changing gender roles between Asian American generations when it comes to working women and their male partners. These themes thread the entirety of the special.

Whether it is the influence of Wong’s UCLA degree in Asian American Studies, or her lived experiences in comedy — or a combination of both — Wong has wisely never made her ethnicity or culture the joke, as some Asian comedians do in pursuit of laughter from white audiences in America. When she pantomimes the gait and clasped hands of elderly Asian women to spotlight her “statistically probable” future, it never feels mocking but lands like a shared inside joke.

Even as she bemoans marriage as “monogamy jail,” Wong highlights the sexiness of her husband and other Asian American men at a number of turns. Wong’s husband, Justin Hakuta, “a Harvard Business School grad” as Wong has habitually told audiences, comes across as an indifferent muse. In the latter half of the special, Wong dissects why women, in her view, are less likely to cheat on their partners after waxing poetic in brutal fashion about the trials of marriage and childrearing.

Perhaps in looking to avoid the trite emasculation of Asian men, Wong emphasizes how Hakuta “bought low” and invested in her when she had chronic acne, carried more weight, and was broke, by her account. Although it takes until the last five minutes, Wong reminds everyone that her husband has a “backbone of steel” and gives her permission to be herself as she winds down from her breakdown of what it means for women to cheat.

Wong’s powers of persuasion showcase truisms grounded not in an everywoman kind of schtick but into a niche celebrity — one that is “leaning in” per Sheryl Sandberg, but also wholly in touch with her sexuality, earning potential, and stardom. Along with that brazen energy, the joy of Asian American love, like that of Wong and her husband, forms a humanity and dimension that is not presently afforded to Asian Americans, as hate crimes mount during the pandemic. In the trailer for the special, a friend group of four Asian women excitedly showed off their Ali Wong-inspired costumes, characteristically large glasses, and animal print clothing to the Netflix team. These overtures of pride in Wong from the Asian American community steadily build for a woman gifted in speaking honestly about the power dynamics in the comedy industry, absurdities of marriage, and more.

Fans of 2016’s “Baby Cobra” will find themselves pleased with this update into Wong’s world as her profile rises, although the sympathetic slacker persona found in “Baby Cobra” has become a thing of the past. Wong mainly highlights the complexities and nuances of two or three tricky topics, such as cheating and marriage, and she contrasts this with the ping-pong variety and evergreen soundbites found in “Baby Cobra” that skyrocketed her career.

Viewers who somehow managed to sleep on Wong’s earlier works may find her use of profanity a hit or miss depending on their sensibilities, but “Don Wong” serves as a great introduction as any of her previous specials to her refreshingly blunt brand. Wong’s decision to call the special “Don Wong” speaks to a central desire for power and autonomy, and the feminism there imposes her iron will to humorous ends, eclipsing today’s bro-ey comedy pickings.

Stream the special at netflix.com/aliwongdonwong. To see more of Ali Wong, catch her in the upcoming Netflix series “Beef” alongside Steven Yeun.