Home Relationships, Lifestyle, Spring 20216 Ways to Know Your Date Has An Asian Fetish (And How to Respond!)

6 Ways to Know Your Date Has An Asian Fetish (And How to Respond!) 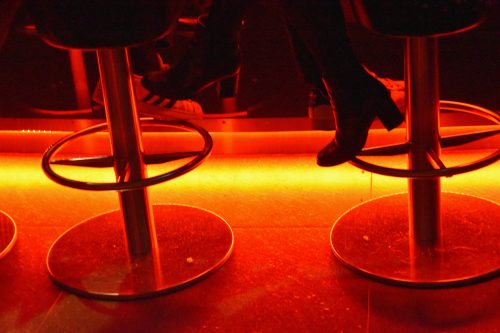 You’re sitting in a cute bar with a cute Parisian you met on Tinder. He asks if you’re Japanese. You’ve only heard this question a bajillion times, so you simply say no, you’re Korean American. An hour later, he begins whispering sweetly to you… in Japanese. Maybe he just switches languages whenever he’s drunk? The next morning, you find a photography book of Asian women licking doorknobs on your soon-to-be one-night stand’s night stand. And finally, it clicks.

Dating outside of our race can be complicated for a variety of reasons, but that nagging question comes up over and over again: do they like me for me, or do they like me for what they think I represent? Nearly every Asian American woman I know has been fetishized in one way or another, and we’re exposed to it now more than ever thanks to social media and online dating apps. Christina*, 30, says, “When I was on Tinder a few years ago, most of the messages I would receive would be from white men who seemed to be only interested in the fact that I was Asian and therefore ‘exotic’ in their eyes.”

Also known as “yellow fever,” the Asian fetish is actually rooted in colonialism, military occupation, and sexual violence against women. And, of course, racism: These strong “preferences” are based on stereotypes about Asian women as docile and submissive, yet hypersexual. And although there are certainly people who exoticize Asian men, more often than not Asian men are desexualized, while anti-Blackness pervades and white men are put on pedestals.

Of course, people from different racial or ethnic backgrounds can and should absolutely have genuine relationships with each other. The problem is that Asian fetishes are slightly more nuanced than the racialized catcalling and sexual harassment so many of us are subject to on a daily basis. The dating scene often leaves us frustrated and paranoid, and unfortunately, society continues to gaslight women of color and insist these are simply “preferences, not fetishes.”

We’re here to tell you you’re not being paranoid! Here are some common red flags you can watch out for when dating, as well as some ways to respond. (Keep in mind that not everything on this list is automatically an indication of fetishim, and that there are varying degrees of severity.)

1. Tells you straight up: “I love Asian women.”

Why it’s a red flag: This is the most obvious, self-reporting sign of an Asian fetish, especially if they are pitting us against other women of different races and ethnicities. They are using “Asian” as a monolith and applying stereotypes to all of us, rather than seeing us as individuals: we are quieter, more sexually submissive, more petite, etc. Some even believe in the ridiculous myth that Asian women have tighter vaginas.

Jade*, 27, recalls, “It was clear in the way he spoke to me that he was assuming that I was some sort of closet sex freak, but also emphasized how quiet, shy, and nice I was. And those things excited him even though I was not responding in ways that would’ve led him to those assumptions.”

Meanwhile, women of the South Asian diaspora have to deal with another layer of complexity. Jenny Singh*, 25, constantly has to deal with assumptions that she is sexually aggressive and “willing to do anything to please a man” because of the Western colonial misinterpretation of the Kama Sutra, as well as “viral videos online of the way women dance from my Indo-Caribbean culture.” This, of course, has dangerous consequences. Jenny has been put in uncomfortable situations “where men don’t ask consent but believe it is their right to touch my body however they please.”

By presuming to know who we are because of what we look like, the idea of “loving Asian women” is often a projection of their oppressive and racist fantasies onto our bodies.

By simply asking, “Why specifically Asian women?” and asking “why” over and over again, you can pick apart and expose those fantasies until they admit to some kind of racist stereotype. At that point, we can all follow Jenny’s example: “Most of the time, I relay my discomfort and drop the person.”

2. Tries to guess your ethnicity (and then tells you why they were right OR that you don’t look ____ when they get it wrong).

Why it’s a red flag: Trying to guess anyone’s ethnicity is annoying and presumptuous at best, and a microaggression at worst. It’s also completely irrelevant to actually getting to know someone and judging compatibility on a date. As people of color in the U.S., we have been subject to othering and the “Where are you from?” question our whole lives. Although genuine curiosity about a date’s cultural background is valid and it can be brought up respectfully within context, I prefer they wait until we bring it up ourselves — which I almost always do anyway because my cultural identity is such a huge part of who I am. But by assuming they can figure us out based on our appearance, they rely entirely on stereotypes. A white man once insisted that I have a “Chinese bone structure” and that my ancestors must have recently come to Korea from China. And although there is nothing wrong with either of these things being true, it simply shows ignorance and arrogance, believing they know better than we do. (As if there aren’t dozens of different ethnicities within China or as if Koreans have one specific type of bone structure!)

How to respond: “Why do you think that?” Again, using the Socratic method of asking questions usually pinpoints the source of their biases. Perhaps their conceptions of what different Asians look like are based on what the media has spoon-fed them. Perhaps they grew up in a city where there are large Asian communities and they’ve adopted the nationalistic biases that so many Asians hold against each other. Nonetheless, it is totally fine to simply say, “You’re making judgments about me based on stereotypes, and that’s wrong.”

3. Speaks to you in any Asian language, completely unsolicited (whether they studied it extensively or not).

Why it’s a red flag: The worst case scenario is that they are mocking Asian languages and putting on accents in a derogatory way. Stranger is the date who, like my Parisian, speaks to you in a completely different Asian language, even after you state that you don’t understand it. But harder to judge is the “well-intentioned” act of actually trying to speak the language of your cultural heritage. Is it a desperate and misguided attempt to impress you? Is it assuming that you want to speak in that language, know how to speak that language, or are more comfortable speaking in that language, even though you’re American?

How to respond: If you actually want to continue the conversation in that language, maybe even test their linguistic prowess and show them up, go for it. But otherwise, reclaim your space and tell them it would hurt your ears far less if they simply spoke in English.

Why it’s a red flag: Why non-Asian people still do this is the real question. I’m talking Chinese or Japanese characters, geishas, samurais, yin-yang symbols, etc. Chances are your date chose these culturally and historically significant symbols purely for aesthetics, stripping away any meaning and actual research. And when we consider the long history of Western colonization and militarism in the East (and everywhere else, really) and anti-Asian xenophobia within the U.S., it’s apparent they are claiming ownership of our cultures, and may be choosing us purely for aesthetics as well.

How to respond: “What was the inspiration behind that? Do you know the meaning or significance of that?” Maybe you’ll find out that your date actually has a “spiritual connection” to Asian cultures! Perhaps your date can actually read kanji and that “small bbq grill” tattoo is totally intentional.

5. Boasts about where they traveled to in Asia.

When it’s problematic: Immediately swipe left on pictures of non-Asian men wearing conical hats in China. However, if your otherwise “normal” date begins to wax philosophic about their travels in Asia to impress you, they may be harboring Western imperialistic ideals — bonus points for a white savior complex. For example, I dated a guy who constantly talked about his time with the Peace Corps in Mongolia and had pictures of himself surrounded by smiling Mongolian children.

Andi*, 29, adds that they especially hate when men “tell you they’ve visited a ‘less popular’ or ‘less traveled’ destination like Thailand. I kid you not — I’ve heard this more than 30 times. [Or] they use the term ‘less developed.’ That really makes me want to either throw myself or them down a spiral of never-ending stairs.”

How to respond: “What drew you to that specific part of the world?” Ask your date questions to determine whether they are actually aware of the post-colonial continuum and actively fighting against white supremacy, or simply maintaining it.

6. Has a history of exclusively dating Asian women.

When it’s problematic: First, we should get something out of the way: dating pools are often limited based on locations, and non-Asians who live in predominantly Asian areas generally get a pass (unless they do something else on this list, in which case, abort mission!). It’s actively seeking out someone of a specific race or ethnicity without getting to know them as individuals that is disturbing and dehumanizing. A college friend recalls a white student who “went to every Asian cultural club to scope out women, [and] it was very obvious and very weird.”

How to respond: “What attracted you to the women you’ve dated before?” If his answer has anything to do with them being Asian, the chances of him applying those same expectations onto you are high. But if his answer is genuine, there is hope he won’t fetishize you!

While we’re on the topic of red flags, it’s important to note that our attraction to white people is not a fetish, but a reverse power dynamic that exists because they are the beauty standard society has forced down our throats. However, internalized racism and social power exist in the Asian community as well, and we ourselves need to stop elevating whiteness and excluding Black and Brown men.

Finally, we must recognize that beautiful and genuine relationships exist across all spectrums of race, gender, and sexuality, and we shouldn’t be ashamed of dating outside of our race or be branded a race traitor either. As someone who is now in a healthy, long-term interracial relationship, hindsight is 20/20. I can’t help but look back and want to shake 21-year-old me by the shoulders and yell, “You should have left after he began speaking to you in Japanese!” Again, trust your gut.

It’s exhausting being a woman of color. So if it’s too much emotional labor for you to have these conversations or if you don’t feel safe enough to push back, that’s okay too. The dating scene is complicated, and at times demoralizing, but your Mochi sisters want you to feel informed, empowered, and badass going forward!

Some tips for dating safety: Don’t give out your last name, specific details regarding your job, or your home address. Before going on a date, always text a friend where you’ll be and ask them to check in with you regularly. Meet in a bright, busy place. If something feels off, don’t move forward! Never be afraid to leave a bad date.

*Due to the recent rise in anti-Asian hate crimes (and given the nature of white supremacy and fragile masculinity), names have been changed to protect the privacy and safety of the writer and interview subjects.