P1Harmony Are the Gen Z Idols We’ve Been Waiting For 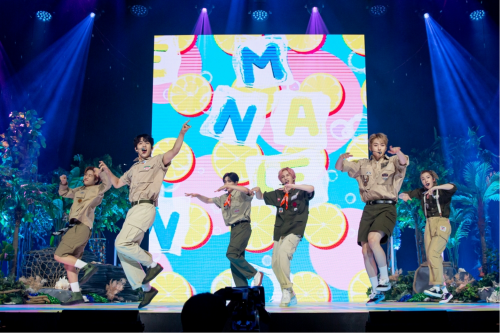 It’s one thing to debut as a K-pop group in a normal year; it’s entirely another thing to debut during a global pandemic. Not only has P1Harmony done the aforementioned, they’ve reimagined how idols connect and interact with their fanbase and exemplified why this 4th generation of Korean pop idols will forever change the landscape of the international music industry.

Hailing from FNC Entertainment, home to veteran idol groups like CNBLUE, AOA, F.T. Island, and SF9, P1Harmony is a six-member boy group (Keeho, Theo, Jiung, Intak, Soul, and Jongseob). They debuted in September 2020 with the premiere of a feature-length film, a first in K-pop history. With such unprecedented marketing tactics, high expectations were set, and P1Harmony has delivered time and time again. Although digital events and online fanmeets were nothing new to the world of K-pop, these types of fan interactions have become the norm due to the COVID-19 pandemic, and the new standard for promotional endeavors of idol groups in general.

P1uspace H: Time To Move Out

In conjunction with sold-out concerts and worldwide tours, idol groups make sure to incorporate smaller-scale events like fanmeets to interact with their fans in more intimate and playful settings. Ranging from skits and group games to special performances of fan favorite songs, fanmeets allow for more informal ways of connecting and performing.

At the most recent fanmeet, “P1uspace H: Time To Move Out”, P1ece (P1Harmony’s fan base name) were whisked into a world where the boys were stranded on a deserted island and had to complete a set amount of missions to be rescued from said island. At times it came across as cheesy in a self-aware way, with scripted dialogue here and there and different members chuckling to themselves. The lighthearted nature of the show poked fun at the format of the fanmeet and was overall really entertaining to watch.

With P1Harmony yet to have any concerts or fanmeets in front of live audiences, the unique circumstances of their debut definitely showcases their comfort and professionalism when performing for these livestream events.

As they went from mission to mission, P1Harmony’s talents and personalities shined through interactive activities and performances of songs from their own EPs (“Nemonade,” “Scared,” “Pyramid,” “Reset,” and “If You Call Me”), as well as renditions of popular Western songs. Some of the fanmeet’s most memorable moments included covers of nostalgic hits and current faves, like “Girlfriend” by Avril Lavigne performed by Jiung with cheerleader-inspired choreography of the other members behind him, a group cover of “Maniac” by Conan Gray, and a beautiful performance of “needy” by Ariana Grande sung by Keeho and Theo. Not to mention Jongseob, Soul, and Intak gave a powerful rap performance of “Down Bad” by Dreamville feat. JID, Bas, J. Cole, EARTHGANG, and Young Nudy. They even threw in a small acoustic snippet of personal favorite, “Sunset Glow” by BIGBANG, while sitting around a cozy campfire onstage!

Even though virtual events can sometimes feel impersonal, the group made sure to involve viewers and fans throughout the entire experience. One particular segment was a scavenger hunt for six different puzzle pieces around the set that were adorned with amazing art created by their own fans. They even made sure to read and answer comments that were coming in real time from viewers throughout the entire two-hour event.

One thing that would have made this fanmeet absolutely perfect though, would have been the inclusion of an interview or getting-to-know-you segment for the new fans who were experiencing this group for the first time. Although there was a wholesome activity of creating sand jars using different colored sand to represent the different members’ various personality traits, it still didn’t provide much context for those who were just learning about the group.

To better understand the different eras of the K-pop industry, idol group debuts can be broken down into different generations, each representing the different trends and concepts of the time. The debut of H.O.T. from SM Entertainment in 1996 marked the beginning of what is now known as the 1st generation of K-pop idols. Building off of that success from the mid-90s to the early 2000s, groups like BIGBANG, Girls Generation, TVXQ, and Super Junior ushered in the 2nd generation of idols. The 3rd generation saw exponential growth internationally; EXO, BTS, TWICE, and BLACKPINK are some of the most notable music acts to come out of South Korea to date.

As more groups continue to debut in the current 4th generation of idols, like P1Harmony, the members of these music groups are all Gen Z individuals. A common theme across these idol groups has been the increased utilization of social media platforms like TikTok and Instagram. Whether it be through posting short clips of dancing to the newest trend or cracking jokes with slang that only people born after the year 2000 would understand, it’s incredible to see the youthful revitalization that’s currently happening before our eyes. The K-pop industry has historically been very secretive and closed off to behind-the-scenes processes, so these digital spaces are helping humanize idol groups, and fans can find more ways to relate and understand their favorite members.

With representation in the music industry being few and far between in North America, K-pop has consistently provided the Asian, Asian American, and Asian Canadian representation that other Western labels have lacked. Unfortunately, in both corporate spaces and the media, Asian men have been emasculated and seen as undesirable. Not only does K-pop discredit those stereotypes entirely, it has challenged the international music industry as a whole to rethink the possibilities of success and who success can look like.

K-pop idols, of all genders, have never shied away from pushing the boundaries of self-expression and individuality. As this younger generation of K-pop idols forge a new and innovative path, it not only helps the industry at large grow and progress, it allows audiences to learn about Korean culture through a medium of art that can be enjoyed by many. If by now you still haven’t looked into the immersive world of K-pop, the groups that have been debuting within the past few years are just a small glimpse into the endless possibilities and future of the Korean pop music industry, and P1Harmony is leading that charge.