Home EntertainmentGoing Back to Her Roots: In Conversation with Singer-Songwriter Wolftyla

Going Back to Her Roots: In Conversation with Singer-Songwriter Wolftyla 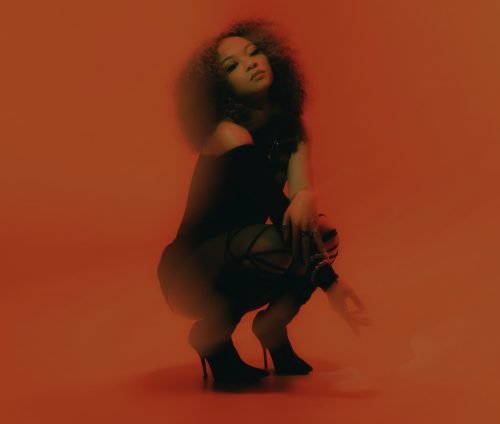 Wolftyla has come a long way since making six-second Vine videos at 16 years old. Over the last 10 years, the singer-songwriter has created a distinct sound and built a loyal fanbase of millions across platforms, releasing hit singles like “All Tinted” and “Candy” and collaborating with rapper, producer, and songwriter Jay Park. As a product of two different cultures, Wolftyla’s Black and Korean heritage has influenced the ways in which she expresses her artistic creativity.

Mochi Mag got a chance to chat with the musician about her journey, her influences, her love for kimchi and Queens, and, of course, her upcoming new album, “If You’re Not Happy, Then Leave.”

“It’s been a really vulnerable experience for me,” says Wolftyla about the album. “And I’m just excited to share it with the world.”

A Lone Wolf Who Cares About Her Pack

Born Tyla Parham, the “Wolf” in front of her stage name represents her unwavering loyalty to the people she cares about — her family, her “pack” — but on the flip side, it means being perfectly capable and okay with being by herself, a lone wolf.

In 2015, Wolftyla went viral with her Soundcloud hit “Feels,” and in 2020, she released her debut EP “Wolf in Color,” establishing her individual and unique style with its R&B, funk, and soul sounds.

When she was younger, Wolftyla wrote Tumblr poetry and short lyrics over instrumentals before eventually finding her voice in songwriting. She started working with other songwriters and seeing their creative processes, and she loved what they wrote, but she realized that there were also things she wanted to say herself.

Wolflyta often goes to LA to create songs, where she collaborates with and draws inspiration from the many studios, producers, and writers. “But the inspiration,” she says, “actually comes from New York. All the ideas, rough drafts, and voice memos are all [from] New York.”

Inspiration comes randomly for her, and once she gets “that initial idea,” she’ll write it down in a notebook. Sometimes, she never picks that idea back up, but once in a while, “all of a sudden,” she has that lightbulb moment.

With a chuckle, she admits, “My overall creative process is just very scattered.”

How Wolftyla’s Korean Heritage and Culture Influence Her Music

When asked about a day in her life, she replies that if she isn’t in the studio, she’s with her family.

“I definitely extract a lot of influence from my Asian background,” says Wolftyla, crediting her grandparents and mother who are from South Korea. “Definitely the Kpop side. I’ve had the pleasure to work with a lot of Asian American producers and songwriters. So I was exposed to a lot of Korean music and, of course, food.”

“The food is bomb. I have so many favorite Korean foods,” she grins, mentioning rice and kimchi as her staples. “I love kalguksu. And anything with noodles and soup.”

However, she also mentions that growing up, she felt very “split in the middle.”

“Like, literally split in the middle, because I came from a background of my mom being Korean and my father being Black,” she explains. “I always just felt kind of like an outcast where I didn’t really fit into a certain box.”

However, she does have some words of wisdom to share with others. “Don’t feel like you need to be in a box. I think everyone has their own very individual path.”

What’s Next for the Musician

Recently, Wolftyla has been working with Jägermeister’s “Local Snapshot,” a content and fundraising campaign with goals of sharing authentic community stories and collaborators from Jägermeister’s Meister brand ambassador program. “Local Snapshot” showcases the local spaces that influence tastemakers, from comedian Lea DeLaria and musicians Big Freedia and Wolftyla, to photographer Atiba Jefferson and tattoo artist Nikko Hurtado. With each content that premieres throughout the year, Jägermeister will be raising funds in order to support a local charity.

“Partnering with Jägermeister has given me the opportunity to go back to my roots,” Wolftyla explains. “And I think this is really important because it was also so important for my grandparents, and generations before me. I was exposed to these locations by my grandparents. So it’s one of those things where being able to go back made me realize, ‘Wow, these things here really carved my life, from my childhood all the way to being a musician.’ It’s just so important to be a part of the community because it literally becomes a piece of you as you grow up.”

One place the musician visited was Kissena Park in Queens, which used to be a five-minute walk from her grandma’s house growing up. “I would go there all the time,” Wolftyla says, looking back fondly on the time she spent there.

The park, filled with childhood memories for the singer, was where she spent a lot of time with her grandfather as well. Wolftyla explains that she cherishes the intimate times she had with her grandfather there, playing basketball or tennis, or just taking a stroll. She looks forward to going back in the future.

“Hopefully everything will still be there when I have kids,” says Wolftyla, “so I’ll be able to say, I used to come here all the time.”