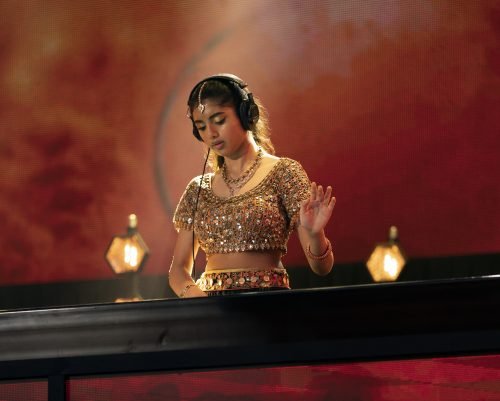 As for the film, let’s dive in: Rhea is just another relatable teenage girl. She has a small, but dedicated friend group that has major pull over school activities. For example, a festival of color modeled after Holi is organized as a fundraiser due to Rhea’s suggestion. She herself is president of the Coding Club. At home, Rhea’s family consists of her father, brother, and maternal grandmother (Rhea’s mother passed away a few years prior), and everyone works at the family restaurant.

After school, Rhea spends her time at that restaurant, Taste of India. This is how the movie starts; the opening montage of Rhea serving tables in the busy eatery brings to life the colors and vibrancy of Indian culture. (Yet, at the same time, this makes it difficult to place Rhea as a teenager. More on this later.) While it is clear that Rhea loves music — she picks the music that plays at the restaurant — she doesn’t think of herself as artistically talented. It is while working a busy Sunday shift that Rhea meets Max, a British classmate who spins records. Through Max, Rhea is introduced to the world of DJing and realizes her talent.

DJing, if you didn’t know, requires much more than simply playing a song and blending it into another song. “Spin” does a great job of breaking down the technical skills required through Rhea’s foray into the world of competitive DJing. Music is all around, a theme that is shared in a flashback scene of her late mother, who was a famous singer. The rest of the film follows Rhea as she grasps at what it means to stay connected to her mother’s memory and her newfound passion, while juggling the responsibilities she has to her family.

What We Struggle With:

The film attempts to set up a tension between family responsibilities, i.e. Rhea’s job at the restaurant, and her newfound interest in DJing. Unfortunately, there is a lack of context to truly bring this struggle to life. Her father, a kind and understanding parent, states to multiple people in the film that if Rhea didn’t want to work at the restaurant, she was not obligated to. Yet when Rhea loses track of time and misses a shift — or later when she is called in for a shift that she requested to be off — it seems that this non-obligatory job is more required than is stated. But why? We know that in many of our Asian American families that children often pitch in with family businesses as a cost-saving measure, but the socioeconomic status of Rhea’s family is never shared and so her father’s position comes off as confusing and inconsistent.

Moreover, when Rhea decides to use her time in Coding Club to write a program to optimize the restaurant’s sales and inventory, her teacher criticizes her for not having “fun.” The framing of the film as a whole does not lend itself to “fun,” from being introduced to Rhea as a waitress to the singular focus on exploring her musical inclinations. The audience really never gets a sense of who Rhea is before she finds the art of DJing.

Rhea screams girl-power! If you felt icky by the fact that her meet-cute occurs while she was waiting tables, her choices by the end of the film definitely deliver. And although the music begins slowly — and is a bit too backgrounded for my taste — Rhea blossoms as an artist and so do the tracks. By the time Rhea performs at the competition, her DJing definitely got me bobbing to the beat.

As a whole, the film definitely carries on the premise to follow an Indian American girl as she develops a love for DJing, a rather specific hobby. And we are excited to see more Desi actors take the lead on Disney Channel and beyond!