Home EntertainmentPondering the “What Ifs” of the Taiwanese Film “Goddamned Asura” 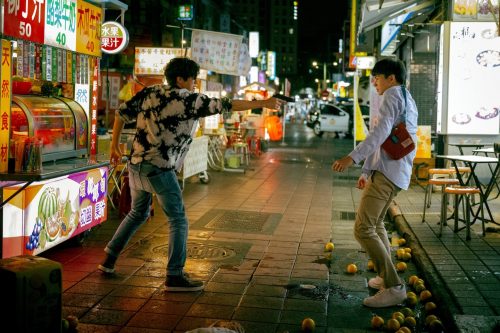 Is it possible to win the game of life? Inspired by real-life reporting of random mass shootings in Taipei, the Taiwanese film “Goddamned Asura” explores the intertwined lives of six people who are all affected by a random act of violence. The 2021 film directed by Lou Yi-an is Taiwan’s official submission for the Best International Feature Film in the 2023 Academy Awards. What truly stands out is the movie’s ability to play with different “what if” scenarios revolving around every character’s decisions. The dark, but not scary, feeling of the film was right up my alley. If you like films and books that make you question how things could be different given other circumstances, or are interested in the topic of determinism, this film is for you.

The thriller’s underlying theme is that there will always have to be some sort of tragedy to balance out the good in the world. Lou, a self-described pessimist, drives home the idea that although things have the possibility of turning out differently, things will never turn out positively for everyone.

“I don’t want to paint an overly rosy portrait of our society,” he shares with Mochi. “For example, I don’t think social status can be changed very easily. Even though it can be cruel or ugly, I think it’s important to represent society realistically.”

On the night of his 18th birthday, Jan Wen (Joseph Huang) goes to the Taipei Night Market to carry out an unplanned shooting that results in a single fatality. Feeling trapped in his life, he feels he has no other choice but to resort to violence. This event ends up shaping the lives of Vita (Peijia Huang), an advertising executive for the popular game King’s World, whose fiancé (a professional streamer) was the only casualty; Axing (Devin Pan), Jan Wen’s best friend and comic book illustrator; Zero (Yu-Xuan Wang), a juvenile delinquent with an alcoholic mother; and Mold (Morning Tzu-Yi Mo), a rebellious journalist who isn’t afraid to uncover the truth, no matter how daunting. Throughout the film, we are given a glimpse into their troubled lives that were initially connected online through King’s World, but officially brought together after Jan Wen’s heinous act.

In the film, each character has their own reason for feeling trapped. For Jan Wen and Zero, it was not having a say in their own lives. For Vita and Mold, it was feeling stuck in their jobs. Although each of the characters has similar feelings toward being imprisoned by their life circumstances, Jan Wen takes it the hardest and decides to carry out a shooting at a busy night market. He had no real plan on what he was going to do or how he was going to do it, and the audience is plagued with questions: “If he didn’t carry out the shooting, what would have happened?” and “Does he deserve to be punished for what he did, even if he had no intentions of doing it?”

Even with the gloomy feeling of reality for the characters, there is still an overarching feeling of “what if?” In one scenario, Jan Wen asks his friend Axing to accompany him to the market to carry out a shooting, to which Axing says no, leaving Jan Wen to his own devices. When the film jumps back and shows us a different scenario, Jan Wen runs into Zero on his way to the market. They end up talking and having a good time, so the shooting never happens. Because of this, it could be said that if Jan Wen had the right support when he needed it, he could have avoided carrying out a crime. This doesn’t put the blame on anyone in particular, but shows that a small action can lead to something greater, even if we don’t think so.

The “What If” Effect

A good outcome for one person could mean someone else gets dealt worse cards. Zero is a good example of this as she is a smart girl in poor circumstances. In the film’s first “what if” scenario, these circumstances lead her to deal drugs and get arrested. In the other scenario, although she is happier and is dating Jan Wen, her family’s social class defines her and keeps her from getting the respect she deserves. With that being said, it’s clear that the director believes that no matter how bad or good things are, there always has to be a balance of the two. As someone who is also a pessimist, the idea that there can be no completely happy ending is something that I not only can get behind, but also wholeheartedly agree with.

Lou’s negative outlook on the world and its damning theme is reflected in the film’s title. “We wanted to incorporate the word ‘goddamned’ into the film title,” shares Lou, noting that the Chinese translation for “goddamned” has an explicit meaning of “deserving to die,” in addition to the meaning of “deserving to be condemned.” He continues, “As this film delves into the discussion of who and what kind of people really deserve to die, we thought it was a strong and appropriate word for the title.” Asura, a deity in Hinduism representing violence and anger, came up in the research process later on, and the film team thought this connection with violence and anger was pertinent to the story.

Why You Should Watch The Film

As Taiwan’s official submission for the Best International Feature Film at the 95th Academy Awards, I appreciate that the film is based on real-life events and highlights the importance of mental health education and gun regulation, which is becoming an increasing problem globally. The film skews toward humanizing people who have committed different types of atrocious crimes. If we knew someone’s circumstances, would we still only judge their actions? The social systems we have in our modern societies must also bear some of the blame as poverty and desperation are often drivers of such actions.

This film shows the idea that it is not all about what one deserves and doesn’t, but also about the struggle of life itself. Lou points out that he touched upon the vain struggles in life. “The scene where Linlin’s mother tries to push her stall up the hill is inspired by the Greek myth of Sisyphus, who is eternally punished to roll a rock up a hill, only to have the rock roll back down to the bottom,” he explained. “However, I also attempted to instill some elements of hope in the story of ‘Goddamned Asura.’ With the ‘what-if’ scenario, I tried to prove that these characters’ lives are, in fact, full of possibilities.” With this sort of framing, viewers have a god-like view because they are able to see everything unfold, as well as the possibilities that could happen, all from above.

For someone like me who likes to ponder all of the “what-ifs,” the fact that the movie leaves the viewer without any clear answers made it all the more interesting. In addition, the use of flashing back to uncover a different scenario, as well as the video game linking all of the characters is something like I’ve never seen before. It’s almost as if, as a viewer, we’re the protagonist in a video game on hard mode. Unfortunately, no matter what choices we make, we can’t seem to win the game.

Filipina actress Dolly de Leon reveals the backstory of her breakout role in the satire “Triangle of... 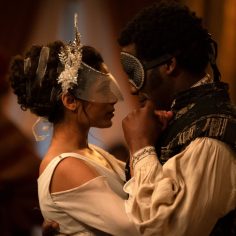