“The Chair” Places Our Proximity to Whiteness in Full View 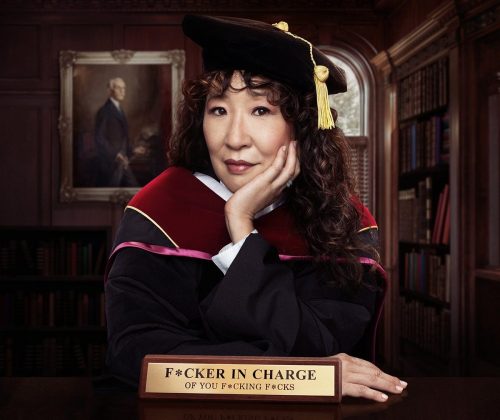 Back in February, Netflix announced that their new series “The Chair” would star Korean Queen Sandra Oh. Oh also shares an executive producer credit with Amanda Peet, so we were all about that. Well, it’s finally August and time to share our hot take on “The Chair.”

Despite the trailer, which focused on college students gossiping in a way that gave us dark academia and “How to Get Away with Murder” vibes, “The Chair” is very much about the inner lives of the professors of the Pembroke College English department. Sandra Oh plays Ji-Yoon Kim, the newly promoted department chair or “f—er in charge” as displayed prominently in the promotional poster. The “f—ing f—s” on said poster are the predominantly white faculty, many of whom are oblivious to the sinking nature of the ship, as captured by the lack of enrollment and interest from students, a very real truth for many humanities departments.

In her first department meeting as the chair, Kim acknowledges this struggle but heroically continues on with a speech that goes, “What we teach them cannot be quantified … or put down on a resume as a skill.” She then goes on to compare Gen Z’s phone addictions to a Harold Bloom quote. (That’s an inside joke for us English majors.)

Yet the comedy juxtaposed with our pride in Asian representation causes a bit of whiplash. In the opening scene, seeing Kim’s Korean name on a door plate with the title of Chair makes one’s chest swell with pride. Yet only a few moments later, we are hit with the moment when she finally takes her seat behind the desk, only for the chair to break and Kim to topple from it — is this foreshadowing or humor?

Humor aside, what does it mean that these crusty white people fighting retirement are being led by an Asian woman, who is also fighting to keep them there? Is Kim upholding the tenure of the old guard? Is Kim complicit?

One of the storylines in the first three episodes follows Kim’s attempt to salvage the low enrollment numbers of two white professors. Meet Dr. Joan Hambling, who is introduced bursting into the department meeting shouting that her office was moved to the basement of the gym. She has 18 students and a salary of $125,220 — higher than Kim’s by over $10k. Nevertheless, Kim does her duty by gently convincing Hambling to read her student reviews and attempts to assist in filing a Title IX complaint concerning the basement office. Kim seems to think that Hambling is worth keeping around, despite the fact that Hambling in another scene harasses a Title IX officer for wearing short shorts, not to mention Hambling’s total neglect of her students’ opinions: “I don’t cater to consumer demand. I’m not trying to be popular.” Deeply disturbing is that Hambling and Kim are more than chummy, celebrating that Kim is the “first female chair” and all that huzzah.

The other “f—ing f–k” in jeopardy is Dr. John McHale. While Kim is merely a bystander to white supremacy when it comes to Hambling, Kim decides that the best way to boost McHale’s enrollment numbers is to combine his basically empty lecture with Dr. Yasmin McKay’s class. McKay is a Black tenure-track professor teaching a popular class “Sex and the Novel.” Despite McHale being on McKay’s tenure committee, Kim forces McKay to co-teach with him in order to save his job. On the first day of their combined lecture, it is clear that McKay is getting the short end of the stick: “That’s Professor McKay, by the way, who has graciously agreed to join our class,” McHale says as he hands her a pile of syllabi to hand out.

McKay’s way of teaching and connecting with students falls on deaf ears for McHale, who calls tweeting poignant quotes the “low hanging fruit” of the English discipline. Scenes in which McKay has to navigate this dusty old mind are painful to watch and without humor, as any woman of color would clearly recognize this abuse and mistreatment — and yet this is a problem of Kim’s making, an Asian woman, herself a woman of color.

At the same time, another storyline concerns Kim’s quest to give that same Yasmin McKay the distinguished professorship for the year — a noble pursuit that moves the story beyond the department and displays the institutional and systemic racism at play. But does that redeem Kim’s intentional positioning of McKay as a life-saving pedestal for McHale’s career?

It could be argued that this is an accurate and realistic depiction of the inner workings of a humanities department, where less than 5% of professors are Black and less than 7% are Asian. Perhaps, these storylines will get resolved by the end of the six-episode run. But the way that the show attempts to humanize professors like Hambling and McHale is pathetic and unrealistic, and Kim’s attempts to prop them up and continue their delusions, rather than set them straight, is just another display of Asian proximity to whiteness.

Of course, the main storyline is that of Kim teaching — teaching Dr. Bill Dobson that is. As yet another white professor, he falls into the trappings of a viral video scandal, and Kim falls, well, for him. Having lost his wife, Dobson is your typical sad boy figure, a day drinking, disheveled dad who just doesn’t have his head on right. Though like all white, male, rockstar professors, he is a best-selling author and does not have the enrollment problem of his peers. Instead, his sin is a lack of accountability. After showing up late to lectures, he finally decides to dig in and in doing so, performs a Hitler salute which he considers to be taken out of context when a video clip of it gets shared on social media.

And while it is so refreshing to finally hear Kim tell off this middle-aged white man — “This is about whether you are one of those men who, when something like this happens, thinks he can dust himself off and just walk away without any fucking sense of consequence” — it is also sad to see a man like this fill in the areas of her life that she lacks. In particular, Kim is a single mother and struggles to connect with her daughter, Ju-Hee, who is starting to understand what it means to be adopted. And so it is Dobson who serves as Kim’s confidant and saves the day, calling for a fun night at the bowling alley. After Ju-Hee falls asleep, Kim asks Dobson, “How are you so great with her?” and notes that Ju-hee never crawls into her lap or runs to her.

If no one is going to say it, here I go: Kim deserves better than Dobson!

“The Chair” realistically portrays the multiple competing pressures of being a person of color at predominantly white institutions and the plight of humanities departments across the nation. Unfortunately, this setup often puts Oh’s character in a position compliant and complicit to white supremacy. Despite all this, we stan Sandra Oh and are holding our breath that the show will come to a disruptive conclusion that dismantles white culture. And if not, we are crossing our fingers that a Daniel Dae Kim cameo will occur, after seeing Kim remove a photo of the both of them off her father’s fridge.

Season 1 of “The Chair” is now available on Netflix. 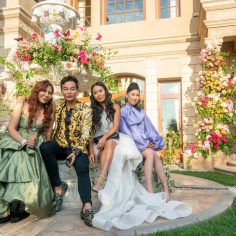 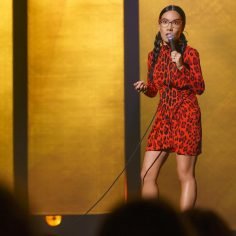 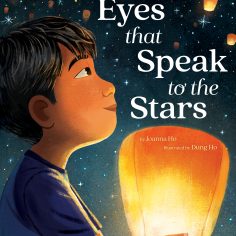 Joanna Ho's "Eyes that Speak to the Stars" follows an Asian boy who finds a new love for the way his eyes are...