Home Arts & Culture, BooksTwo Sisters Find that “This Place is Still Beautiful” Because It is Home 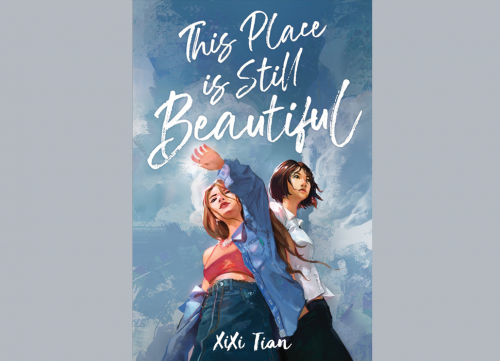 This article was sponsored by HarperCollins. All opinions are of the writer’s and not representative of HarperCollins or its subsidiary companies. Read an excerpt from “This Place is Still Beautiful” here.

Fans of emotional, slice-of-life stories will find their next favorite book in XiXi Tian’s “This Place is Still Beautiful.” In her debut novel, Tian draws on her background growing up in the Midwest, addressing the complexities of growing up Asian in a small, mostly white Midwestern town.

“I loved my hometown. It wasn’t perfect, but it was good,” she writes in a letter to readers. Her novel describes the intricacies of being a minority in a small town the way Celeste Ng does in “Everything I Never Have” and Linda Sue Park does in “Prairie Lotus.” The difference is that “This Place is Still Beautiful” is a young adult novel set in the present. Nonetheless, what racism looks like for Asian Americans in small towns seems unchanged over time – it’s in the air one breathes and is hard to pinpoint at the same time.

Until one day, when it shows up as bright red paint on a garage door in the form of the word “Chink.” Now that racism is impossible to ignore, how does a young Asian woman respond to it? Tian herself recalls being called the slur and feeling torn between quietly getting over it or making people notice it. It’s one of many tensions that drives this book: Is it possible to love and belong to a place that targets who you are?

Out of the struggles between the Chinese and American sides of herself, Tian came up with her two main characters, Annalie and Margaret. The biracial sisters take turns narrating their summer in the aftermath of the racist incident. They respond in opposite ways, reflecting their relationships with the town itself. Annalie loves her town and showing newcomers her favorite spots; she wants to belong and move on from the incident. Meanwhile, Margaret finds her hometown stifling and moves to New York for college; she calls out injustices when she sees them. The sisters’ responses threaten to tear apart their already thin relationship.

In Annalie and Margaret, Tian explores a subtle dimension of racism: white proximity. Margaret presents as Asian and is unlikely to be accepted into the spaces that Annalie can, being white-passing, in their small town. “People label her pretty. People label me exotic,” Margaret summarizes. Despite their having the same ethnic identity on paper, strangers often see Annalie and Margaret as unrelated.

The effects of white proximity play out in every relationship the sisters have: with each other, their mother, their romantic partners, and their town. Annalie and Margaret cannot understand why the other would magnify or ignore racism. Margaret feels like she could never please their mom, who prefers the less confrontational Annalie. Their high school labels Margaret as the difficult girl who makes a huge deal out of qipao prom dresses, while Annalie is “the rational one” who wouldn’t get mad. Although both sisters feel that the other has an easier time, it’s clear to an outsider that trying to satisfy a close-knit town as a minority is a lose-lose situation where one would always be doing too much or too little.

The differences between the two sisters don’t get starker than in the secrets they keep from each other. The childhood flashbacks that they never share with each other are filled with a sense of incompleteness. Margaret remembers nearly drowning in a duck pond as her dad walked away from 3-year-old her toward her mom and baby Annalie. In another memory, Annalie sees their mom teaching them Chinese. She remembers “mì mì,” the word for secret, with the character “heart” embedded in both characters. “A secret is two hearts,” she said. Her mom eventually gave up on teaching them Chinese because there isn’t anyone else for them to practice with. This feeling of a connection cut short pervades the story.

But the story is about more than lost connections. It is also about the things that make it so hard to leave or even spite one’s hometown. One of the highlights of the book, and one that is a testament to Tian’s own experiences, is how the town becomes a character. Tian gives life to Annalie and Margaret’s central Illinois town as a place that is beautiful and also ugly upon a closer look. It’s the place where high school peers at the mall give you sympathetic or hostile looks for being the target of racism. It’s also the place of summer jobs, first intimacies, rekindling old flames, and driving to a cornfield or diner to get away.

In the end, “This Place is Still Beautiful” asks the question “What do our hometowns mean to us?” And for racial minorities, to what degree did we ever belong to it? Tian doesn’t give easy answers to how we mend relationships and what is the right way to respond to racism. She shows how two flawed sisters respond to it in a way that makes sense to them and keeps their ties to their hometown, however strong or weak, intact.

“This Place is Still Beautiful” comes out on June 7, 2022. You can purchase Tian’s book here and keep up with what she’s reading and writing next by following her on Twitter at @xixiwrites.