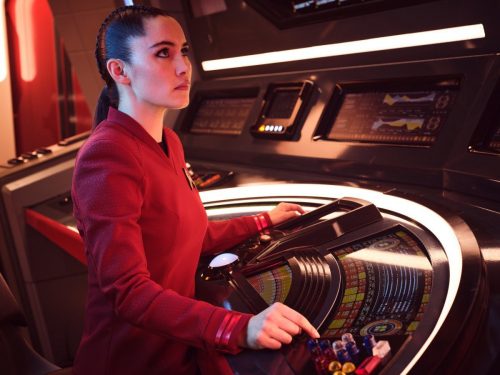 Growing up, I had a fascination with science fiction to the point of obsession. It even got to the point that I wanted to focus on it in college. (In fact, I did my honors thesis on science-fiction environments!) From fantastical worlds to wacky new creatures, I am always sure to find something new and enthralling within Star Trek and in the depths of the sci-fi genre. As I delved in deeper to the history and lore that shaped these stories, however, I always wished for more representation of myself and others.

As we grow into a new era of the rapidly moving genre, we see now more than ever people of color in far-off lands. “Star Trek: Strange New Worlds” puts its best foot forward when it comes not only in telling an engaging story, but making sure all those who watch it feel inspired and a part of the universe through equality and diversity.

What is “Star Trek: Strange New Worlds” About?

The Star Trek franchise is back in a wondrous and adventurous fashion in “Star Trek: Strange New Worlds” available on Paramount+. While staying true to Trek values, the series takes a step forward focusing on character building and development. Set a decade before “Star Trek: The Original Series,” it follows Captain Christopher Pike (Anson Mount) and his crew aboard the USS Enterprise as they embark on new adventures.

I sat down with Christina Chong to talk about her role as La’an Noonien-Singh, being Asian in the entertainment industry, and what this new series means for old and new Trekkies alike.

La’an is a human lieutenant and chief of security on the Federation Starfleet. She is a descendant of the infamous Khan Noonien Singh (as in the Wrath of Khan). Raised with two brothers, La’an was often bullied as a child for her name. While living with her family on the SS Puget Sound, they were all attacked and subsequently eaten alive or killed for breeding rituals by the Gorn (a reptile-like alien species, predominantly portrayed as villains in the Star Trek series.), La’an being the lone survivor. As “Strange New Worlds” takes place, La’an has grown up, recovered from the incident with the help of Number One (also known as Una Chin-Riley, Pike’s second-in-command and portrayed by Rebecca Romijn), and was inspired to join Starfleet.

Chong had this to say about the role: “The fact that I get to do so much with La’an — she gets to play with every regular character, and there are similarities between me and La’an emotionally —  it’s very cathartic because I use the things I’m going through and I use that for La’an. As she is overcoming it, so is Christina.”

How Did Christina Chong Feel About Joining the Star Trek Legacy?

Chong stated that the Star Trek audition was just another audition during a point of her life when she was auditioning for as much as she could. Having been cast in other sci-fi roles, such as in “Doctor Who” and “Black Mirror,” the role fit like a glove despite her admitting that she wasn’t a Star Trek fan. Things have definitely changed in that arena; she now understands the ebb and flow of the franchise and why people love it.

“I am glad it happened that way,” Chong said, “and now I am here — like the cat who got the cream situation — with the role. Luckily, I wasn’t in awe of it when I auditioned, because if I was, I probably wouldn’t have gotten the role and would have been intimidated stepping into big shoes like that. I am glad that I have slowly learned the love that comes from the fans and the love of the creators.”

What is Chong’s Favorite Part of the Franchise’s Lore?

That being said, the Star Trek universe is so expansive and has decades of source materials. Once Chong got into it, she became a fan. Surprisingly as a newer Trekkie, Chong’s favorite aspect of the show is the Talosian race. Humanoid creatures, the Talosians are a race whose planet was blown apart by nuclear warfare. They survived underground and, in turn, were able to harness their mental powers to create magnificent illusions, as they had become disillusioned with reality and what came with it.

“I am very much a believer that your mind is the strongest tool you have and when you can control your mindset and can create things, manifest things like these Talosians are doing,” Chong shared. “When I watched that series, I suddenly thought, ‘Oh, Star Trek is not what I thought it was. Star Trek isn’t this thing that only my brother watches.’ It is a lot more than people shooting phasers. The messages that Star Trek subtly weaves through the storytelling suddenly landed with me — messages which really make people sit and think afterwards.”

What Is it Like Being One of the Few Asians Depicted in Science-Fiction?

Science-fiction as a genre has always had an issue with racial diversity. Even though, in many series and depictions, the human characters will come into contact with alien species, there has always been a lack of diversity among the cast.

“In the UK, I feel like they’re still quite a bit behind America in terms of representation,” Chong explains. “All of my roles would come mostly through America, and to think that I now could possibly inspire a little girl to not be ashamed of who she is and embrace her authentic self, whatever that may be, whatever ethnicity she is, it makes me want to get teary. I wish I had that growing up. If I can give that to somebody else, I think [it will be] a huge part of my job fulfillment.”

Why Should Viewers Tune Into “Strange New Worlds”?

Trekkies fear not, “Star Trek: Strange New Worlds” will remind long-time fans of “Star Trek: The Original Series” with elements such as slower episodes that give the audience more time to really take in the subtleties of the characters, the journeys, and the characters’ experiences.

Science-fiction has a knack for coming off incredibly dense or hard to follow with spider threads of characterization, lore, and technology wrapped into one expansive package. However, with “Strange New Worlds,” it’s clear and easy to follow because it’s informed by its characters. More than anything, it is a show about the characters and how they take in their new surroundings and react accordingly. All with a modern edge.

Christina remarked, “It’s almost like each episode is its own movie and we have license to do anything. The writers could come up with some crazy and insane ideas and do it, which is why I love Star Trek because you can just come up with anything. It’s not predictable, and it’s going to keep growing. The characters will keep growing and developing, and that’s what is so great about it. The characters are key.”

For those who are hesitant about getting into a new series or franchise, Christina shared that “Yes, it is a sci-fi show, but it’s more than that. It’s just a really great TV show. Give it a chance if you’re not a Trek fan already. Give it a chance and wait. We just get to do so many different things, and each episode is exciting in its own way. It never gets boring. There is something for everyone in there. If you like light-hearted, hopeful, meaningful TV, then ‘Strange New Worlds’ is for you.”

Christina Chong is a British film and television actress of Chinese and English descent who has appeared in such shows as “Black Mirror” and “Doctor Who” and films such as “Tom & Jerry: The Movie.” She is also mom to Runa Ewok, her lovely Cavapoo. You can follow Christina Chong @chrissychong.

“Star Trek: Strange New Worlds” is based on the years Captain Christopher Pike manned the helm of the USS Enterprise. The series features fan favorites from season two of “Star Trek: Discovery”, Anson Mount as Captain Christopher Pike, Rebecca Romijn as Number One, and Ethan Peck as Science Officer Spock. The series follows Captain Pike, Science Officer Spock, and Number One in the years before Captain Kirk boarded the USS Enterprise, as they explore new worlds around the galaxy. “Star Trek: Strange New Worlds” is streaming now exclusively on Paramount+.