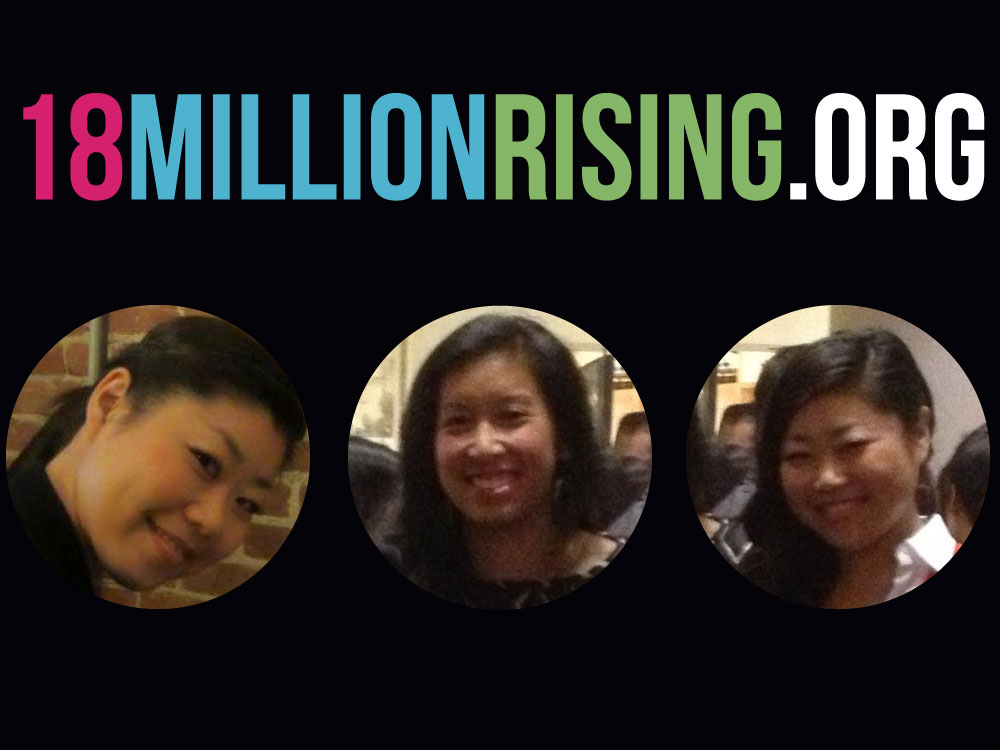 18 Million Rising, an online advocacy organization that fights racism and discrimination against Asian Americans through online petitions, is a perfect representation of activism in the digital age. In combining the traditional strategies of grassroots movement and the immediacy of the Internet, 18MR has produced notable campaigns for removing racist mobile apps such as the infamous Make Me Asian and Make Me Indian apps on Google Play. Spearheading this movement are Director Christina Samala and Campaign Manager Jennifer Pae who are both first-generation Asian Americans. 18MR represents not only their passion for change and advocacy, but also their commitment to bringing unheard voices to the table.

“I see 18MR as a vehicle for Asian Pacific Islanders, particularly young APIs, to get engaged in important social and political issues,” says Samala. “It was really exciting this fall to launch in a time where APIs are the fastest growing demographic. It’s exciting to be participating in activating people online, particularly APIs who are having this coming-of-age movement in the context of being American.”

In other words, in a generation where four out of the top 20 YouTube subscribed accounts are Asian Americans, Samala’s passion for social justice partially takes on a strategy of striking while the iron is hot. The growing presence of Asian Americans, whether it’s through politics or entertainment, has greatly affected the general recognition that we’ve been getting.

Since 18MR’s launch last September, the group has supported nearly 80 different civil engagement campaigns. For last year’s presidential election, the group provided online voter registration tools while spreading information about issues that Asian Americans and the rest of America needed to know about.

But what makes an online movement like 18MR successful? Pae says the growing voice of Asian Americans is no coincidence—the digital age is certainly an impetus for amplifying the API voice. “We’re seeing more actions being able to happen at the click of button, whether it’s an online petition or sharing some racist offensive mobile application on Google Play and saying, ‘This is wrong,’ ‘We need to do something about it,’ [and] ‘I want my voice heard.’ ”

Both women credit their successes to their families’ struggles and commitment to giving them more opportunities in life than they could have imagined. Because of this, Pae pauses to ponder whether her success can truly be considered “self-made.”

She says, “I’m only here today because of my mom and my family. My mom raised my sister and me as a single parent. English was not her first language, and many of her traits of being a fighter and being able to make it through all of these challenges [are] instilled in me.” She nods at everyone before her who worked for Asian American rights and who has, in one way or another, supported her peers, recognizing that advocacy is a community effort.

Samala expresses a similar sentiment, crediting her fire and passion for leading a revolutionary movement to her Filipino heritage. “I never wanted to settle for what exists because I really believe when you want things to be different or you see a better way, you have to go for it. I think a lot of that has to do with my upbringing and my parents,” she says. “Revolution is in my blood—the revolution against Spain started in my dad’s town, and so I feel like I carry that with me.”

These days, it’s encouraging to hear about these victories for Asian American rights, and now more than ever, advocacy groups are rallying around important issues that were once never up for discussion. These two women also remind us that committing ourselves to spreading awareness and making sure our voices are heard aren’t just goals to better our futures, but ways to uplift and fight for the past generations of Asian immigrants who worked hard to put us in this position in the first place.