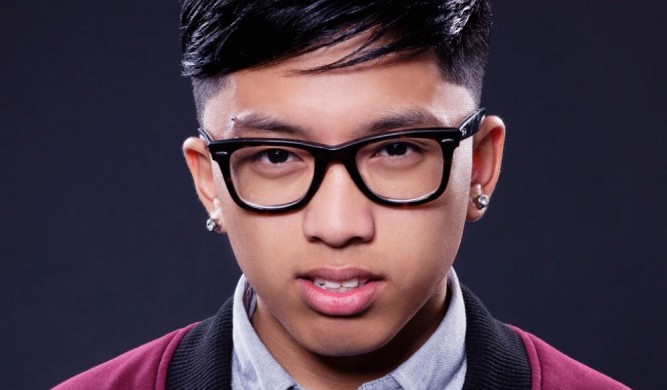 It’s no secret that YouTube has been a popular platform for individuals all over the world to broadcast themselves—but who could have guessed that major beauty, fashion and music corporations would start using YouTube to seek out their next muse? Among the overwhelming number of registered users on YouTube, the talented self-taught rapper D-Pryde is a star who has caught the attention of one of the top music recording labels of all time.

D-Pryde, also known as Russell Llantino, is a Filipino Canadian rapper with over 57 million video views on YouTube at only 19 years old. He’s been making waves in the hip hop world, having recently signed with recording label BMG (a Sony Entertainment venture) this past December. He was nominated for XXL Magazine’s 2013 freshman cover and is certainly in good company with artists and songwriters like J. Cole, August Rigo, Bun B and Dumbfoundead, just to name a few.

Needless to say, he’s exactly the kind of star we’re celebrating in our Self-Made issue. Read on for Mochi’s exclusive scoop on D-Pryde’s beginnings on YouTube, his journey after getting signed, and his next big move for the near future.

Mochi Mag: Tell us about making your first YouTube video.

D-Pryde: I started [on YouTube] when I was 13. I saw a bunch of viral videos on random websites and forums and was like, “Hey, this site is kind of cool. Maybe I can do this stuff too.” So I just started uploading videos for fun, not even expecting to really get fans.

MM: When did you realize music could be more than a hobby?

DP: When I got signed at 16, that’s when I was like, “Oh okay, this is serious. I’m not going to be in school anymore, this is actually my love.”

MM: You’ve been signed with record label Mars Music Group before signing with BMG. How did that first relationship come about?

DP: Long story short, they found me on the web from a bunch of freestyle videos I did. One of the guys from Mars Music Group, Phil, looks exactly like me, so that gained his attention and then, all of a sudden, from there we just started talking.

MM: What does working with BMG mean for your career?

DP: The whole team, everyone around me is taking it more seriously now and there’s more pressure. It’s the type of positive pressure we all need to be more focused and keep me in check. [The BMG] joint venture is a good home and provides an opportunity to work with people and put my single out on the radio and the EP. Everything’s going to be bigger.

MM: What exactly would you say makes you a self-made artist?

DP: The fact that I get to push more of me being me. My label is very lenient [with me] being myself instead of molding me into a pop star. I just got famous from being funny and weird.

MM: Is it hard being an Asian rapper?

DP: It was hard in the beginning, but now hip hop is more inclusive. I came out in a good era. There used to be struggles, but everything is better with the record deal as leverage to tell all of the haters, “Well, I made it here, can’t make fun of me now.”

MM: How did you come up with your rapper name?

DP: My rap name used to be Duke because I grew up in not the best neighborhood, not the best state, and I just wanted the highest class out of everything for my mom and for my family. But, after everything, I was like, “Duke is a little too cliché,” so I switched it up and put the “pride” in there—pride being proud of everything so far and having led up to something big.

MM: Who or what inspired you to get into rapping?

DP: On the ”what” side, I wasn’t good at anything but rapping. And sports weren’t a main hobby to me during high school. And ”who” would be Eminem. He’s my biggest influence.

DP:“Start Again” by Rik Cordero [executive producer of YouTube Channel Three/21]. It was simple. It was just me solo in the entire video, as a character along with a drummer, and it filmed amazingly. It was the first video I ever did with Rik.

MM: What’s your advice to aspiring Asian rappers out there?