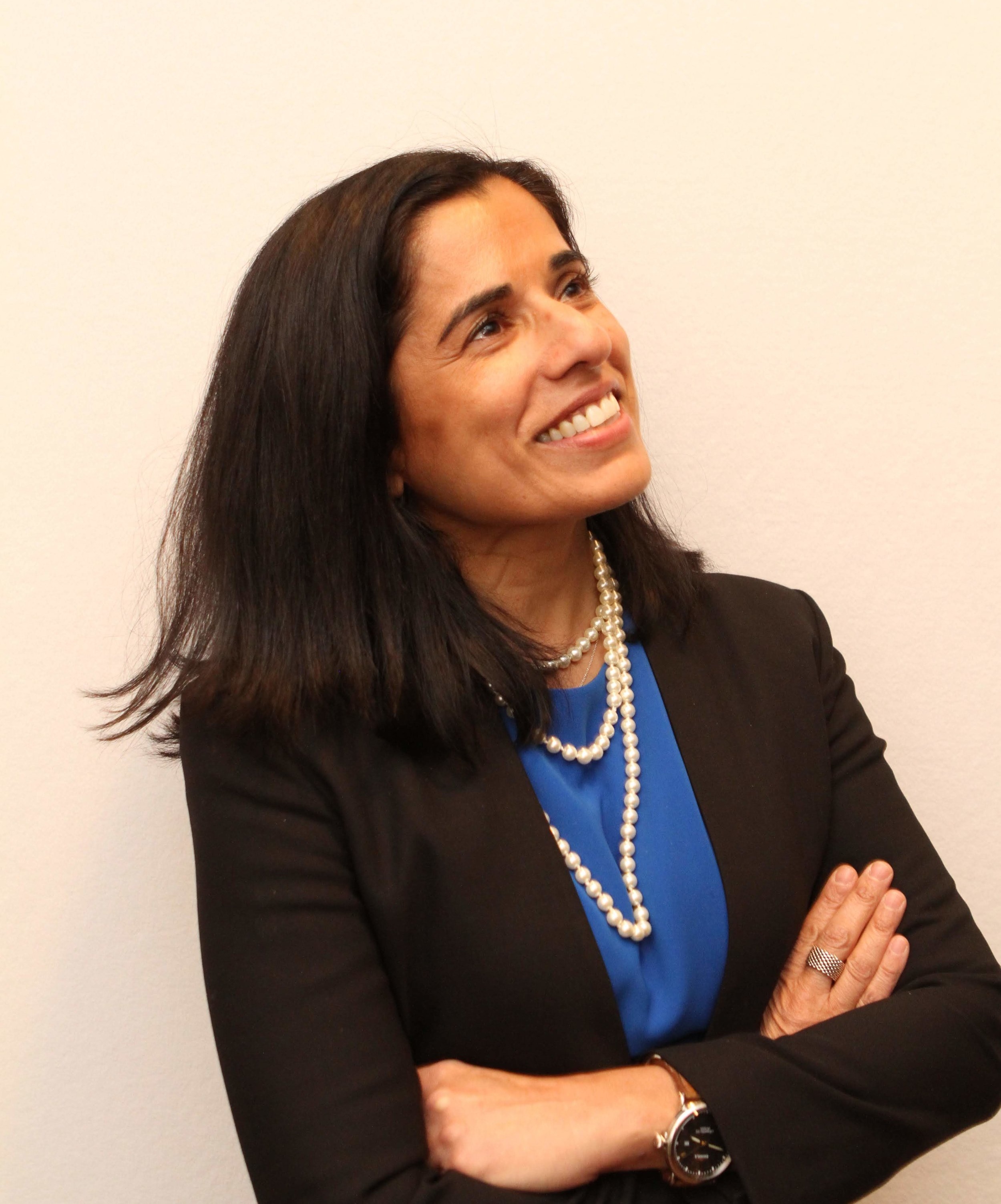 In August 2018, Seema Nanda took over as the Chief Executive Officer (CEO) of the Democratic National Committee (DNC), becoming the first Asian American in recent memory appointed to the role. As CEO, Nanda manages the day-to-day operations of the DNC and supports the Chair in executing strategy. The formal governing body of the Democratic Party, the DNC promotes the Party’s platform and coordinates campaign efforts to elect Democrats at the federal, state, and local levels. Nanda played a pivotal role in the DNC 2018 midterm strategy that led to historic numbers of Democratic women, people of color and Asian Americans being elected to Congress and local and state offices across the United States.

After a long day of work with even more events and meetings to come, Nanda sat down with Mochi magazine one evening in March to discuss her background, Asian American identity, the DNC’s work, and the future of the Democratic Party.

Reflecting on the 2018 midterm elections, she remarked, “I’m really proud of how we as groups and individuals who wanted to be part of the resistance came together at political organizations, at the DNC, at our sister committees to do what we had to do in 2018 to win elections.” Much of her inspiration comes from the incredible organizing power happening at the grassroots and local levels, largely built by women of all different backgrounds who “at the end of the day are the folks who are moving our country for the better, who are doing so much to move us forward.”

To Nanda, the 2016 presidential election was a turning point that crystallized the profound effect elections have on people’s lives. Alarmed by the divisive rhetoric and policies of the new administration, Nanda was determined to fight back. She shared, “It seemed to me like one of those times in our lives where we will look back at this country and say ‘Where were you and what were we doing to combat what was happening in this country?’”

For Nanda, that answer came in the form of serving as the CEO for the DNC. Priort, Nanda served as the COO and executive vice president of the  Leadership Conference on Civil and Human Rights (2017-18). She also served as current DNC Chair Tom Perez’s chief of staff (2016) when he was the Secretary of the Department of Labor under former President Barack Obama. She has had a varied career path working in a range of fields—social justice, civil rights, labor rights, and immigration. Nonetheless, her guiding principle has remained the same: Nanda has always asked herself what she can do to have an impact in the world and improve people’s lives.

In terms of her own contribution, Nanda has sought to help immigrant communities and communities of color. Her background and upbringing has no doubt influenced this passion as she is intimately tied to both communities.

Growing up in West Simsbury, Connecticut, a small town northwest of Hartford, Nanda was the middle child of three daughters. Her parents had immigrated from India and worked as dentists. She calls her parents very “typical Asian immigrant parents of their day but also unusual in many ways.” On one hand, like many Asian immigrant parents, her mother and father had high expectations for what Nanda and her sisters would achieve. They had lamb curry and chicken curry once a week, and her mom blasted Hindi music on weekend mornings. On the other hand, they would go to Donna Summer and Linda Ronstadt concerts and make pork chops on the grill.

One among a handful of children of color in school, Nanda spent much of her youth trying to fit into the predominant culture, largely homogenous and white. She said, “It definitely affects everything about how you see yourself, that feeling of otherness, feeling like you’re seen as ‘other’ certainly at that point of time in the late ‘70s, early ‘80s.”

That all changed when she entered Brown University in Rhode Island, where Nanda stepped into her identity and became involved with a South Asian student organization and Asian American student associations. Her own involvement in Asian and Pacific Islander American (APIA) issues early on helped her gain a nuanced understanding of the challenges involved in organizing and reaching APIA communities. She acknowledges, “We are absolutely not a monolith. We are incredibly diverse. There is diversity of language, immigrant experiences, of how strong different communities are doing economically…” Nonetheless, she strongly believes that APIAs across the board stand to benefit from supporting the Democratic Party. Asked how she would define it, she said it’s the “Party that is very values-driven, the Party that cares about truth, fairness, opportunity for all, and justice.”

Moreover, on issues ranging from healthcare, gun control, government spending, economic security, education reform, and justice, Nanda maintains that the Democratic Party is much more aligned with Asian Americans. The key is to speak about the Party’s values and convey the message that they align with that of APIA voters. Nanda is intent on investing in these communities early on, not taking for granted who is and has always been a Democrat, and explicitly making the case to voters: “This is why you should vote for Democrats, this is why it affects your life, this is why it affects your healthcare, this is why it affects your economic security…” Letting the great work that the Democratic Party is doing be known, heard, and trusted at the grassroots level is a key DNC objective.

Although political organizations sometimes fail to invest in all communities, Nanda is proud that the DNC invested in APIA communities, spending more than in previous years on ethnic media and getting greater numbers of field organizers and volunteers on the ground. The success of these investments was clear in the 2018 elections, with 77% of APIAs voting Democrat. Under Nanda’s leadership, the DNC put a number of organizers on the ground in critical races in California, New Jersey, Nevada, Texas, and Washington among other states. APIA voters turned out to make the margin of victory in a lot of critical races. The positive results in 2018 affirmed to Nanda that investing early in our communities is important. She aims to continue to get folks on the ground as early as possible to reach voters and to develop a smarter, more targeted and impactful approach in general. This work is already underway for 2020 elections with programs being rolled out to reach these communities.

One program Nanda is especially excited about is Organizing Corps 2020, which launched earlier this year. This program offers paid fellowships for college students of diverse backgrounds, particularly those from communities of color, to work on the ground in important battleground states. Students get trained in the “art and science of being a field organizer in a presidential election” and return to their home communities to organize along with their local Democratic Party. This program is important in part because people of color—specifically Asian Americans—are heavily underrepresented on campaign staff, yet as Nanda notes, it’s most effective when those from one’s own community are knocking on doors.

Asian Americans in particular are often viewed as being less politically active. Nanda attributes this to the fact that “[APIA] people simply don’t see themselves represented in politics.” She stresses the importance of political participation, noting that all these issues—healthcare, immigration, economic security—affect APIA communities profoundly. Calm, but forceful, she affirms, “When we have a voice in our government, in politics, we are stronger, we do better for ourselves and for our families.”

She hopes that with her own appointment as DNC CEO, along with the new crop of congressional members, many of whom are women and people of color, young people will start to realize that jobs in government and political leadership could be open to them, and that they should have a say in what their country’s leadership looks like. Asked to give advice to the next generation, Nanda shares: “Never think that a position or a certain career path is not open to you because you haven’t seen anyone who hasn’t looked exactly like you in that position.”

She herself benefited from the mentorship of several African American women who came before her. Now, having worked in public service for a few decades, she has gotten to work with, teach, and learn from more Asian American women. These include DNC Vice Chair and New York Congresswoman Grace Meng, who’s been “a fantastic mentor and leader” to Nanda. Another is Washington State Congresswoman Pramila Jayapal, who has been a strong advocate on immigration issues.

To Nanda, representation is essential not only to ensure political participation, but also to make better decisions in the workplace. That can be even more crucial when your workplace is the DNC. Reflecting on identity in the workplace, Nanda shares, “We are all operating on several levels of identity at all times. We’re wives, we’re sisters, we’re mothers. I’m a South Asian woman, I’m the child of immigrants, I’m a second-generation immigrant, I am a person of color, I am a woman, I am an Asian American woman.” Nanda elaborates, “I bring a perspective that is unique to my experiences, and I think that enriches the conversation. We bring all of who we are to a job, and I think it makes conversations go differently, which is why diversity and inclusion are so important to me at the workplace.”

Closing out, Nanda offers a key piece of advice that she carries with her: “It’s incredibly important to pursue work that both feeds your soul, what is gonna make you happy, and really think about where you can have impact. There is nothing as rewarding when you’re gonna work so hard as feeling your work is really impacting the lives of, in my case, Americans or people in America for the better. That’s what gets me out of bed every morning—feeling like this work has impact.”