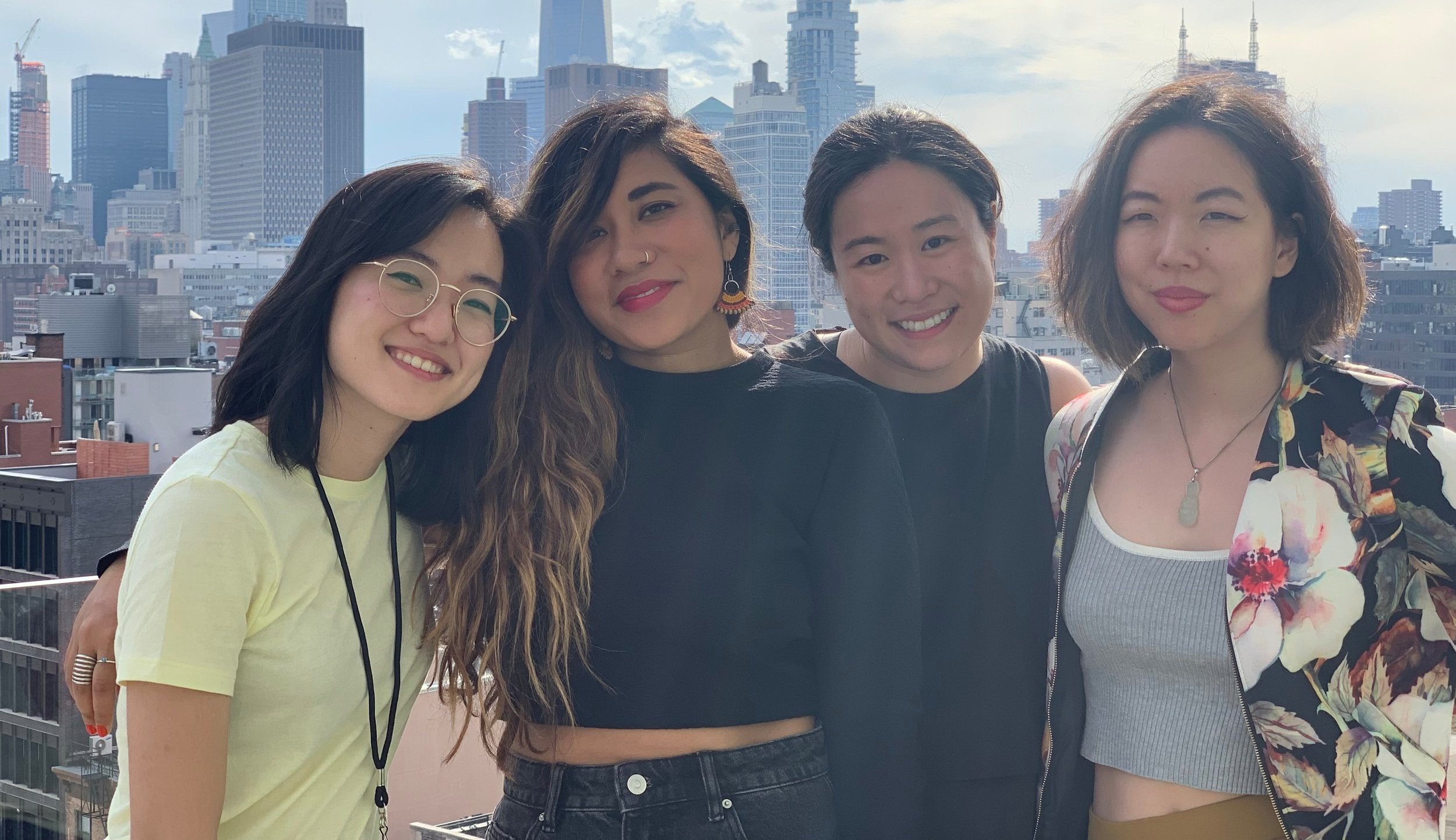 Each in her own unapologetic, impossibly hip, and fierce way, the powerhouses Julie Ae Kim, Rachel Kuo, Senti Sojwal, and Tiffany Diane Tso fused their forces in the wake of the Women’s March in 2017 when they felt the exclusion and tokenization of women of color in the feminist resistance. This was the genesis of the Asian American Feminist Collective, a group of organizers, scholars, artists, and writers whose mission is to engage in intersectional feminist politics grounded within diverse, multiethnic, and diasporic Asian communities and identities. The collective provides much-craved spaces for identity exploration, political education, community building, and advocacy.

The inaugural leadership committee of the AAFC discussed via email the Asian American feminist political pulse of the nation, as well as what’s next for the collective with Mochi magazine.

MY: Since the collective officially launched in 2018, how has the discourse on feminism and Asian American feminism evolved?
TDT: Even if it was a little dent, I like to think there are now at least a few more Asians in the diaspora thinking critically about and identifying openly with feminism.

RK: A lot of our work in this first year has been around creating spaces for people to engage the “personal as political.” For example, we did a sexuality talk circle in February to talk about fantasy, desire, and our relationships with our bodies—topics of intimacy and pleasure are directly tied to feminism. Through our events, zine, stories, etc., we hope that people are able to reflect on Asian American-ness as a political identity, as well as ground intersectional feminist politics within our many communities. In shifting culture, we can shift politics. Projects like our portrait series written by Tiff (with photos by Marion Aguas) featured in the Broadly showcase the multitude of experiences, identities, and practices of Asian American feminism.

MY: The storytelling series is an gut-wrenching, powerful part of the collective’s work. What role do you see the “Stories” serving in your mission? Did you have any unexpected takeaway from the “First Times” theme? What is the next theme and when will it launch?
TDT: The storytelling series is crucial, because it gives a platform to voices that aren’t often given space in our media and literary worlds. There are definitely boundaries and obstacles to getting published, which we wanted to remove to make room for Asian American feminist voices to be heard. As a diverse group of people, we have a multiplicity of identities and paths, but there is always something powerful about being able to relate to another person’s experience. You feel less alone in the world, so it’s very important for us to continue to share our stories and carve out our own spaces for those stories to be told.

The next theme is being workshopped, but we should be announcing it soon on our Instagram, Twitter, and other social channels.

MY: What are some of your favorite initiatives as a collective? Where do you see the collective in five years?
SS: What I love most about what we do is that we bring people together. Sometimes that means a panel discussion on co-creating feminist futures but sometimes it means getting drunk at a dive bar and talking about “Queer Eye” with people who share your worldview. I’m looking forward to doing more of that—to creating space where we can just be, and build, and forge those kinds of liberatory connections. One example is our Asian American arts showcase at Bowery Poetry Club where we celebrated some of our community’s incredible artistic work!

TDT: We had a reading event with Andy Marra (of TLDEF) and Sister Diaspora for Liberation at Asian American Writers’ Workshop, a dim sum and books event, and a giant picnic. More to be revealed soon. For now, I’m just really enjoying getting to share space and discourse with so many amazing radical Asians, and working together to make the world a better, more livable place.

RK: We have so many cool events and projects coming up! As Senti and Tiff mentioned, so much of that is about sharing space and also uplifting the work of incredible people in our community. Our work is possible because of our partnerships and our collaborations; our friend Shahana Hanif at Bangladeshi Feminist Collective has spoken a lot about intentional relationship building and the work of friendship in movement building. Through AAFC, I’ve gotten to meet so many amazing people. The process of nurturing and deepening our connections with one another and coming to care for and supporting each other in doing this work is something I look forward to continuing as we grow as a collective.

MY: Do you each individually have separate passion projects, either within or outside the collective? What are they?
TDT: Editing and publishing the First Times storytelling submissions was my passion project for a while. I’m a journalist in my “real life,” so I know the many barriers to getting published. I’m always glad to be able to pay it forward and give others the opportunity for their words to be read.

SS: AAFC is my passion project. I work full time in the reproductive health and advocacy space and am also a grad student in public health at NYU. I publish political writing when I have the time and energy. It’s a really critical time to be doing that work, especially with the ongoing attacks on our reproductive freedom from the Trump administration, but it’s also so important to carve out spaces for our activism on our own terms, outside of predominantly white neoliberal institutions. AAFC is my space to speak out, organize, activate, and create relationships and connections without limits, and I’m so grateful for that.

JAK: My full-time job is in the New York City Council as their Women’s Caucus Director. AAFC is a way for me to indulge in my thoughts and obsessions around Asian American identity, feminism, and dismantling the patriarchy, all while building community. I’m currently also pursuing creative writing and would like to eventually write a novel or collection of essays.

RK: Within the collective, one of my favorite projects has been working on our inaugural zine (future editions to come!), which lays out our political commitments and identifies some shared foundations for Asian American feminism. I’m in academia and a personal challenge for me has been figuring out how to make racial critique more accessible—playing with different media formats and objects has been a way to collaboratively develop a common language and translate complex ideas through the process of design.

My research focuses on collective Asian/American politics, building solidarities, and the role of digital technologies in shaping racial politics—one of my current projects has been using archival research to trace out a genealogy of women of color feminist networks, coalitions, and alliances, which has helped me also think a lot about the past, present, and future of Asian American feminism. I’ve been looking a lot at different organizational statements, structures, membership definitions, and community agreements, to see how feminist groups envision and enact ways of being and working together. For me, this work helps me reflect on ways to mobilize intersectionality and also feminist practices of trust, care, and accountability.

MY: If you could snap your fingers and completely remake U.S. mainstream media, what would it look like?
SS: Brown, black, yellow, queer, femme, ethical, representative, factual; devoid of white men in power, the ubiquity of the male gaze, and Scarlett Johanssens.

RK: Yes, yes, yes to what Senti said! When I think about mainstream media, I also think about the consolidation of power and control over our access to media. A lot of our media content and our capacity to communicate with each other is tightly controlled by a small number of corporations. I’d want to see a restructuring of our media industries to make them actually democratized.

MY: There is a trending, divisive debate within our community around interracial relationships, specifically Asian women who are in relationships with white men. Issues like this seem to have us tearing each other down instead of supporting one another. As a collective focused on community building, how do you feel about this issue and how are you addressing it?
SS: I don’t care who people have sex with. We believe in holistic, empowering sex positivity—this means keep it ethical, consensual, communicative, and compassionate. Examine racial dynamics in your intimate relationships as you would any other realm of your life and explore sexuality with people who deserve you, but also don’t put sex on a pedestal. Fuck or don’t fuck whoever you want, and don’t apologize for making your own decisions about your body and pleasure. We aim to cultivate communities where sexuality is valued and explored with inclusivity and respect, not policed.

MY: What hopes do you have for the next U.S. Presidential election? Are you optimistic?
SS: All I can let myself hope for is that we elect someone who isn’t the literal white supremacist troll currently in the White House.

JAK: I’m hopeful that some of the Democratic candidates will bring progressive, innovative, humanizing policy to the table. We can’t go on much longer without real solutions and ideas around climate change, student debt, the healthcare system, and immigration reform, just to name a few.

MY: Is there an Asian American film or media piece coming out that you’re really excited about? What recent works are you most looking forward to?
SS: I’m really excited about forthcoming work from two South Asian American writers and creators whose work I love deeply, Fatimah Asghar and Tanaïs (née Tanwi Nandini Islam). In particular, Fatimah’s “Brown Girls” web series is being brought to HBO!

JAK: Ocean Vuong’s novel, On Earth We’re Briefly Gorgeous! This novel just recently came out and it will save you with its poetic prose on topics like sexuality, family, and trauma.

MY: How can our readers support the collective and get involved?
TDT: Come out to our events, keep up with what we’re doing online (Twitter, Instagram, Facebook, Tinyletter), or donate!