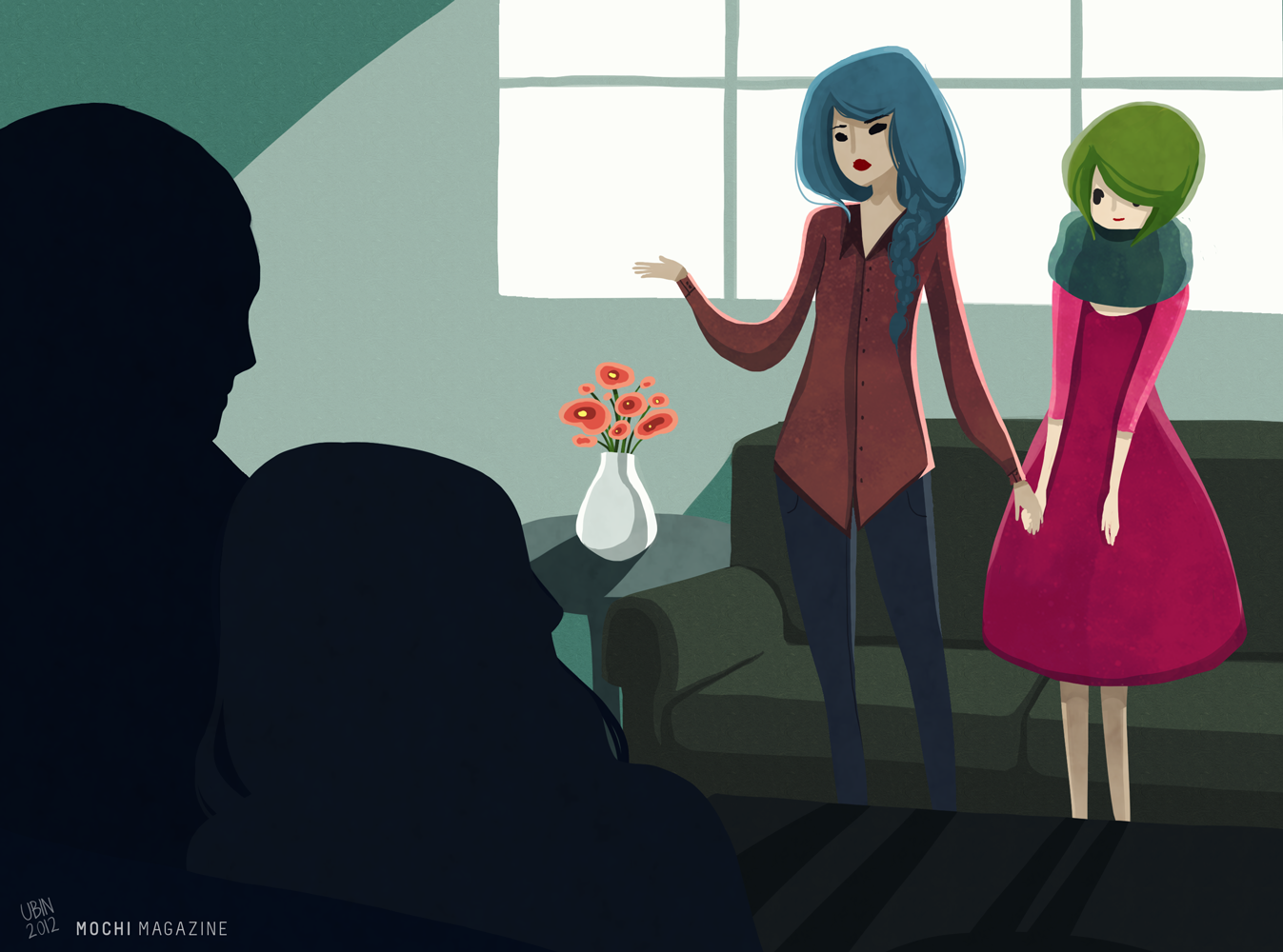 Coming out. That one phrase signifies both a challenge and an accomplishment. It can be a difficult experience, but the experience is undeniably one that becomes part of your identity. Unsurprisingly, each coming out experience is unique to the individual–one person might come out to friends first, while another person could choose to speak to a sibling first. Mochi sits down with three individuals on the different challenges they each faced when it came to opening up about their sexuality.

While some people feel like they’ve always known they were gay, for Sophia Roselle, a student at California State University-Long Beach, coming out to herself was a confusing process. “The first person you come out to is yourself, which is very difficult–probably the hardest one if you value a socially accepted relationship,” she says. And though you don’t have to worry about what other people think when you haven’t involved them, sexual orientation can be a complicated thing to sort out for yourself.

“I was open to the idea of being romantically involved with them, and yes, it made things more complicated if I found myself actually attracted to them. I was actually trying to be straight the whole time,” she admits. “I [wanted] to be attracted to them to get me out of the rut I was in. So when I did find myself drawn to a guy, I’d see where it went.”

But the closeness with her female friend inevitably demonstrated that she could find a relationship with either gender. “It was really muddy,” Sophia Roselle says. “This happened for a long time, this heightened best friendship. Eventually, it was clear she was jealous I was going out [with other people]. It was more and more clear that this actually involved substantial romantic feelings.”

Even though she has since had other relationships, Sophia Roselle believes that reconciling her own sexuality in the very beginning was crucial to her current happiness and comfort with who she is. “I’ve been in several meaningful, deep relationships because I know the nature of my attractions. Understanding yourself is the [key] to having satisfying connections with people,” she says. “If you’re acutely aware of your values in a partner, then you will never waste unnecessary time or heartache. It’s so rewarding knowing how to spot true compatibility instantly.”

Mark first knew he was gay when he was in sixth grade. At first, he didn’t accept it, pushed it off, or found ways to occupy his time. Once he hit college, he decided to explore his identity and eventually accepted his own sexuality. When he came out to his Christian fellowship, he had a difficult time reconciling his faith and being gay, but he was received and accepted warmly.

“It really helped that I was on a campus that was really friendly to LGBT people, and I met a lot of LGBT people who were really comfortable with who they really were,” says Mark.

Though Mark hadn’t come out to his parents in college, he felt it was finally time to tell his parents two years after graduation. “When I was a kid, I could [avoid] my sexuality by talking about schoolwork and friends. But once you get out of college, they ask you, ‘Are you seeing anyone?’” he says. “Your sexuality does not completely define who you are, but at the same time, it makes up a lot of your identity.”

Moreover, he wanted to give his parents enough time to process the news. “It took me six or seven years to come to terms with who I am—I expect it should probably take them the same amount of time or more,” Mark reasons. “If I were to marry a man in six to seven years, I would have to tell them now to have them be OK. I think that it’s a courtesy to them to tell them early on, even though it might hurt.”

Mark expected his parents to be sad, hurt and betrayed when he broke the news. But their initial response surprised him, because there was little crying or hurt on their part. “They didn’t see my homosexuality as a given, as something that I had accepted as an identity for myself. They wanted to fix it, and they applied the same principle to anything in life for a Chinese: if you work hard enough, you can achieve your dreams,” Mark says. He’d forgotten a big factor in his parents’ reactions: “In Asian cultures people [often] see homosexuality as an action, not an identity.”

In the next few conversations following his coming out, his parents discussed with him how they could go about “fixing” or praying his sexual orientation away. “These were difficult conversations to have given that I had spent all my energy to actually tell them I’m gay,” says Mark. “I felt selfish trying to defend myself.”

Mark found himself doubting his own sexuality during some of these conversations. “I did not expect that, but when the world tells you that something is not normal and the people who love you the most feel like they want to fix this ‘sickness’ or ‘problem,’ naturally you start to question whether your lifestyle is indeed not normal,” he explains. “I’m glad I came out at this age, since I am comfortable and confident with [who] I am. Even though I started to encounter some doubt, I was able to stand up to my parents and talk about why I am who I am.”

Recently, Mark’s been helping his parents reconcile the idea of being gay and a Christian and further discussing whether homosexuality is “normal.” As he continues to reassure them that he can still have a family and instill the idea that homosexuality is an identity rather than a disease, Mark believes that his parents are now able to slowly accept his sexual orientation.

“I’m glad to know that I’ve started the process of their acceptance of my sexuality,” Mark says. “It’ll take some time just as it did for me, and I hope that any Asian Americans out there who encounter this generation and cultural gap in understanding stay strong in their own convictions and educate their parents slowly, no matter how hard it may be.”

Laurent is gender queer, though he didn’t know it at first. This means that while he was biologically born a female, he doesn’t necessarily identify as someone who is strictly either male or female (though Laurent prefers to be addressed by male pronouns). “I don’t believe that there are only two genders in this world,” explains Laurent, referring to the concept that there is a spectrum of gender between male and female. “Depending on the day, I [can] feel more male, female, or something in between.”

As a child growing up in Indonesia, he initially identified as a lesbian, which was extremely difficult because of the limited exposure he had to non-heterosexual individuals. “The only gay ‘role models’ I had were the gay men and trans women doing trashy TV shows or [those] being ridiculed on the streets and TV for being gay or trans,” Laurent recalls. “The only news I would hear was all negative. There certainly were no lesbians out as a role model in my community, school or [other] public spaces.”

In the end, he came out first to a friend in high school. As much as he feared rejection, he says, “The feelings had bubbled for so long and I needed to let it out. I was glad I could tell her the truth.”

But it wasn’t until after he moved to the United States for college that he learned about gender queer identity at Hotpot, a community for queer Asian and Pacific Islanders. “I immediately felt that this is what I identify with, I just didn’t know it had a name,” says Laurent.

As he stumbled upon other organizations in the API community that focused on LGBTQ issues, Laurent was given various opportunities to speak about his coming out experiences—and he jumped to take them. “I want other gender queer immigrant folks to know that they are not alone, that being gender queer is as normal as being straight and cisgender [identifying with your biological gender],” he says. “I was a kid who didn’t know all of these things, until I grew up and met the right people at the right time who told me there was nothing wrong with me.”

So in the last 3 years, Laurent has been speaking about growing up queer in Indonesia as well as here in the States. He’s learned that audiences often don’t realize how complicated coming out can be when you’re not white or cisgendered as well as being an immigrant. But he’s also quick to praise that it’s definitely easier being queer in the United States. “You can casually admit to being queer in conversations with friends or [if you have a partner]. You can hold hands, or even kiss in public with your partner, and no one will object.”

In speaking out and helping to build a stronger, more open and more understanding community, Laurent finds that he feels more liberated himself, too. “It’s freeing because I don’t have to treat being queer as a horrible secret anymore. I’m a good human being and I am perfectly normal just like anyone else. I can enjoy my life and be happy.”