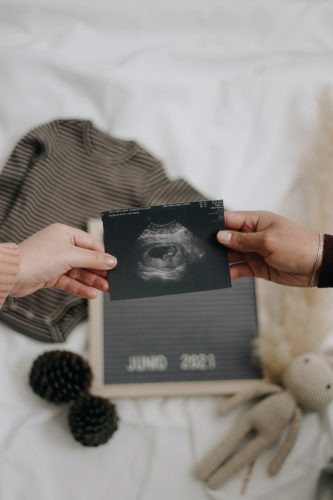 When Samantha and Melissa Lechlitner-Lewis got married, they knew that they eventually wanted children who shared their genetic makeup. The two tied the knot on New Year’s Eve of 2019 and are just beginning the process of getting pregnant. But the road to parenthood for them — and other queer couples — is not well-paved or as straightforward as it would be for cis-gender heterosexual couples, particularly when it comes to conception.

For queer couples, “casually trying” to conceive is not an option, and insurance companies may require proof of infertility before covering fertility services, if at all. The costs of medication, cryobank fees, treatment — they all add up, making access to fertility services a privilege and an option that not all people can access. To add another layer of complexity, queerness remains a taboo in many shame-centered Asian families, which impacts the level of moral support couples may receive from their parents through this process and into parenthood.

“Up until a few months ago, we couldn’t tell you the difference between intrauterine insemination (IUI) and in vitro fertilization (IVF),” admits Samantha, who is alternating rounds of IVF with her wife until one of them conceives. “It’s just not something you hear people talking about or see anywhere, especially in Indiana [where we live]. And I think especially for so many people, the gay community having kids is still so taboo that you really have to tiptoe around talking about it.”

In California, Serena and Melissa (Mel) Cerezo-Poon, are on the other side of the journey. They recently celebrated their firstborn’s fourth birthday and are expecting their second baby — both pregnancies a result of IVF. Serena carried the couple’s first child, undergoing one IUI and seven cycles of IVF. Each round of IVF aims to produce and retrieve as many eggs as possible, but the majority of Serena’s first five cycles of IVF produced only one egg each. Each round required Serena to take hormones to stimulate egg production; her eggs were then retrieved and fertilized with donor sperm before being transferred back into Serena’s uterus in hopes of a successful implantation and pregnancy.

After the fifth unsuccessful round of IVF, the couple decided to have Mel step in for egg production, retrieval, and fertilization, producing embryos to be implanted into Serena. The second transfer of Mel’s embryos resulted in a successful pregnancy for Serena, with their baby being born in May 2017. In October 2020, Mel became pregnant with the couple’s second baby after having experienced an ectopic pregnancy and several unsuccessful rounds of IVF.

“The way we approach our fertility journey is completely in acceptance that we need help,” Mel says. “There’s no other way we could do this. We don’t have this psychological or spiritual feeling of failure or shame that is encumbering us.” This acceptance may lead to a greater willingness among queer couples to think outside of the box and consider a wider range of options that cis-gender hetero couples may not immediately entertain.

While each couple enters the process with their unique circumstances, here are some tips to jumpstart the process for queer couples specifically wanting the pregnancy and birth experience:

Be mentally prepared to begin and move forward. While cis-gender hetero couples can simply go off birth control and casually try to become parents, queer couples need to proactively take steps toward progress. Serena cites mental readiness as a key component in determining what couples are willing to do, whether that means researching fertility specialists or scheduling a doctor’s appointment. “There is that point at which you’re thinking about it and thinking more about it, but then something happens and you go into action,” Serena says.

Once you start, be prepared to face invasive, often insensitively worded, questions from people who are curious about who the father is, who the “real” mom is, or the logistics of the process. Be mentally prepared to put in the labor of educating curious friends, family members and strangers, as well as being held up as an example of how being queer doesn’t mean you cannot have children.

“It’s so relatively new [for queer couples to have kids], and if you come out as gay, especially in the Asian community, [the assumption is that] you’ll never get married or you’ll never have a family,” Serena explains, adding that she and Mel have become an example to others that being queer does not mean you cannot have children. “Especially with the older generation, they say, ‘[My child is] gay, that means I’m not going to ever have grandchildren, which is funny because just because you have a child doesn’t mean you’re going to have grandchildren.”

For people who have strained relationships with non-affirming parents, know that having a baby may not lead to instant reconciliation. Although Mel’s mom is affirming, Serena’s parents rejected her when she came out. When she and Mel got engaged, non-Asian friends assured Serena that her parents would want to be part of their big day. Yet that was not the case for Serena — and for many of her queer Asian friends. Although a strong sense of blood family is central to child-rearing in many Asian cultures, “be prepared that you might have to do this by yourself,” Serena says. “The baby will not heal everything, and a baby will not take away the pain; you have to be very intentional to step into the joy.”

Know what’s covered by your insurance. Irene Poespowidjojo, office manager/new patient and financial coordinator at the Center for Assisted Reproduction and Endocrinology (C.A.R.E.) for the Bay Area, says dealing with insurance is one of the main challenges that queer couples face when trying to become parents. Before pursuing any treatment, confirm what type of fertility services and medications are covered, if referrals are needed, what sort of diagnostic tests are covered or if there is another insurance plan option with better coverage of fertility treatments. Laws and plans vary by state and insurance provider, so take the time to ask questions and know what will and won’t be covered.

Another hurdle is that some states require a diagnosis of infertility before fertility treatments are covered, which puts same-sex couples at a disadvantage. “This means a queer couple has to figure out a way to try [to conceive] on their own before insurance will pay, where a hetero couple can say they have had unprotected intercourse for six months and that is enough [to prove their infertility],” Poespowidjojo explains. “Many [health insurance] companies don’t understand that the requirements to move forward with treatment are not the same for queer and hetero couples.”

In early 2021, a new bill was introduced in the California Assembly proposing that commercial health insurance companies be required to cover infertility treatment. The bill also suggests a new definition of infertility that includes “the failure to establish a pregnancy or to carry a pregnancy to live birth after regular, unprotected sexual intercourse” and “a person’s inability to reproduce either as an individual or with their partner without medical intervention.” This latter, more inclusive, addition would be a win for singles and same-sex couples who want to become parents.

Choose medical staff that you trust. Once your insurance questions have been answered, find medical professionals you wholeheartedly trust to respect and support you through a life-changing season.

Living in South Bend, Indiana, Samantha was nervous thinking about the medical staff and their opinions on same-sex marriage. “I know we’re choosing physicians who support our marriage and our eagerness to become moms, but it’s kind of scary not knowing what other medical staff are thinking,” Samantha admits. “Even though it shouldn’t matter, it’s stuff like that that you have to consider when you live in such a conservative area.”

Ask your OB for fertility specialist recommendations, and then do additional research before selecting someone. Ask about the doctor’s history in serving same-sex couples either at the first consultation or over the phone before even scheduling a consult. Check the office’s website, too, as some will clearly state that they are inclusive of all families.

Have a thorough conversation about sperm. Before choosing a sperm donor, talk through what you’re looking for. Do you want the donor to be known or anonymous? Whom would you consider if you want a known donor? What criteria are you looking for in a donor, and how important is the donor’s ethnicity?

Samantha and Melissa opted for a sperm donor and anticipated that the search would be an arduous process. “But with all of the health, ethnicity, [family] background and personality information [the cryobank] provides, we found it pretty easy to narrow down what and who we were looking for. We tried our best to find hair colors, personalities, eye coloring, etc., that was a blend of both of us [being a Japanese American and white couple] since we’d both like to try to carry,” Samantha says.

Serena and Mel also preferred to have a child who was genetically theirs and one that shared their ethnic backgrounds. They perused the cryobank’s donor booklet at their favorite beach and thoughtfully considered the candidates. While there were many monoracial donors, there were very few that reflected the couples’ Chinese and Filipino ethnic makeup. They eventually chose a multiracial donor with a Chinese, Filipino and German background.

“It wasn’t until this year that I became more aware and proactive about what it means with both of us [parents] being monoracial Asians, raising a multiracial child,” Mel says, acknowledging the prevalence of racial gatekeeping and the harm that comes from trying to categorize individuals. “He’s going to be readable as a mixed child, and people are going to constantly ask questions about that, so we want to equip him with language and pride and the ability to say, ‘I’m this and this and this.’”

Despite the insurance barriers, potential discrimination and emotional labor that queer couples may experience when pursuing parenthood, couples like the Lechlitner-Lewises and the Cerezo-Poons are pressing forward to realize the family of their dreams. “Growing up, I always knew I wanted to be a mom,” Serena says. “Don’t be afraid if having a family is really what you want. Never let the fact that there is a journey to take scare you off.” 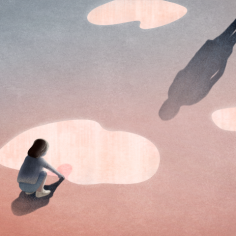 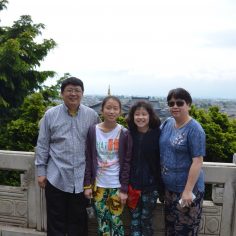 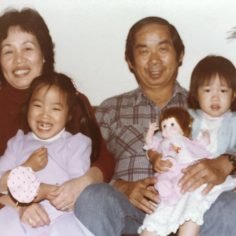