Home Activism, Summer 2021These Anti-Asian Racism Organizations Are Proof That Care— NOT COPS — Protects The Community 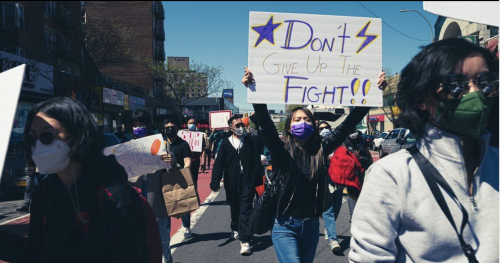 Toronto resident Julie Kim was on her way home when a white man yelled out to her, “We’re better than you.”

“I knew not to engage with him because I was alone,” says Kim. “The street was deserted, and I don’t know if he was trying to provoke me to come and engage.” Fearful of what further interaction could entail, Kim stayed quiet and continued home.

These days, for many in the Asian community, hearing stories like Kim’s are as commonplace as finding a sack of rice in our households. After the 45th United States president and his administration repeatedly scapegoated East Asians for the coronavirus pandemic, violence and bias against the AAPI community have grown exponentially in the U.S. and abroad.

The Center for the Study of Hate and Extremism at Cal State University, San Bernardino reports that anti-Asian hate crimes have increased by 169% in the U.S. during the first quarter of 2021 compared to the same period in 2020 — and Canada isn’t faring any better. The Chinese Canadian National Council’s Toronto chapter recorded more than 1,150 cases between February 2020 and March 2021, with Vancouver reporting a 717% surge within a year.

In response to globally escalating anti-Asian racism, many have banded together in grassroots organizations and initiatives, but differing approaches to community safety have divided the AAPI collective. For example, in the U.S., the recently proposed COVID-19 Hate Crimes Act is a bill meant to address the rise in anti-Asian incidents by bolstering law enforcement to expedite the review process of hate crimes and collect more data. Some in the community — such as California’s 27th district representative and chair of the Congressional Asian Pacific American Caucus Judy Chu, and president of Oakland’s Chinatown of Commerce Carl Chan — are in support of the bill, agreeing with increased policing in Chinatowns or other Asian-populated areas. Others — like the National Queer Asian Pacific Islander Alliance and the nonprofit for AAPI civic engagement 18 Million Rising — denounce the act as unsafe for communities of color, especially in the wake of the numerous deaths at the hands of police officers, including but not limited to the murders of George Floyd, Breona Taylor, and Angelo Quinto.

The growing number of hate crimes against the Asian population, coupled with the growing discourse on systematic racism inherent within policing institutions, leaves AAPI members to grapple with the meaning of community safety. Many in support of the bill, and many still on the fence, question: If police aren’t the solution to potential dangers, what is? How can we reimagine safety that acknowledges the sociopolitical intersections of race, class and gender?

That’s why Kim’s response to her own experience of anti-Asian aggression is so telling. Moved by the ever-increasing number of people who’ve experienced similar incidents as hers, Kim began a grassroots program, Go Be Safe, that reimburses car service rides for Asian women and elders. In early 2021, she began a GoFundMe to crowdsource money to redistribute to the most vulnerable in the community. That way, those who feel unsafe taking public transportation, yet lack the means to secure private car service, can still get home safely.

After only a month after launching, Go Be Safe has already taken off — getting press features from Toronto Star to CBC News, and submissions and contributions to support riders. Although Kim provided the platform to build and spread awareness of the initiative, in the end, she acknowledges that it’s “the community that wants to keep the community safe.” Kim simply set up Go Be Safe to request aid from the community, and they have shown up and shown out in solidarity. “To be honest,” Kim continues, “Go Be Safe wouldn’t be the program that it is today, if it were not for the generous contributions from the community.”

Kim herself is “trying to take a neutral stance” in regards to policing. Still, it’s clear that Go Be Safe offers a way for those in the Asian diaspora to look after one another without police intervention. Simply ask the community, and they shall respond.

Teresa Ting, a Queens native from New York City, asked for volunteers to patrol Flushing in order to watch over its citizens, intervene in any instances of hate crimes, and track and record anti-Asian encounters for her organization, Main Street Patrol. And just like Kim, Ting found the response from the community overwhelming.

On days when organizing may feel the most discouraging, Ting says, “It’s the power of the people that drives you forward.”

On the second week of patrol, which began in February of this year, Ting felt worried: “It was pouring outside, and I was like ‘Oh my god, I don’t think anyone’s going to come’”— but then eleven people did.

“There were people from the Bronx, from Connecticut, from Jersey, Rockland County,” she says. Moved by how the sense of community spanned more than a local neighborhood, state and even country, Ting met her volunteers and got back to work.

By patrolling Flushing with everyday citizens, the group is able to look after the community in ways police can not. Each volunteer is organized into groups where at least one member can speak an Asian language, as many elders do not know English or know it fluently. Volunteers are trained in bystander intervention practices and discuss implicit bias to make sure they are representing those in the community without harming other BIPOC community members, like those in the Black community who are often wrongfully and dangerously racially profiled by police. The routes that patrollers walk through are mapped by those who live in Flushing, and thus are clued into the best places to monitor.

Looking like everyone else in Flushing also makes them more approachable to the community. When it comes to those in uniform, Ting explains, “A lot of people are afraid of that authority. They see it and they’re intimidated, or maybe they don’t want to speak to them,” meaning they are less likely to reach out or ask for help. On the other hand, people aren’t afraid to address civilian patrollers because they have “a more personal-level approach.” As a result, civilian patrollers “can speak to the community a little better” than officers.

As the AAPI community, and world at large, reckons with the harmful effects of policing, organizations like Go Be Safe and Main Street Patrol are proof that community care is a successful method of using activism to provide safety — and they’re not the only ones. Kim’s initiative was inspired by another Asian organization, Cafe Maddy Cab, which offers ride fares for Asians living in New York City. There are also a number of organizations that have popped up in the wake of these hate crimes: Compassion In Oakland and Safe Walks NYC provides chaperones to escort local elderly members, and Soar Over Hate provides self-defense tools to AAPI women, elders and LGBTQ+ members, and the list goes on.

Placing safety in the hands of the community not only safeguards our neighborhoods from racist encounters or wrongful bias from police; it also strengthens the AAPI diaspora itself. When Kim started Go Be Safe, she didn’t realize what a successful initiative would mean to her. “Seeing the support for the community is like healing and comfort,” she says. “There’s a space the community is making, like they’re opening up their hearts and contributing.”

Ting echoed the emotional effects of grassroots organizing: “For the longest time, you have that community but you don’t actually know people in it.” Since starting Main Street Patrol, however, Ting is able to meet volunteers and they, in turn, meet each other: “It’s cool to bring these people together […] It’s just a great support system we have.”

And their system is growing. Kim and Ting’s organizing demonstrates how activism doesn’t act in isolation. Rather, it works in tandem, sparking a network of leaders and initiatives. Just as Kim was inspired by Cafe Maddy Cab, others empowered by Ting’s work have reached out to her to create other programs. As a result, Main Street Patrol has since expanded from just walking around Flushing. Now, they partner with other nonprofits and small businesses to offer self-defense classes, food drives for community fridges, and educational seminars on de-escalation tactics for bystanders.

During this time of rampant xenophobia, how the AAPI community chooses to respond to these concerns will create lasting consequences for our collective futures. Will we perpetuate a racist and violent institution or will we collectivize and start a new chapter for our history books?

If the current AAPI efforts are any indication, putting our resources into social services is both a successful and meaningful form of change. Already, a shift has been marked in the Asian diaspora. As Kim notes, the community is “now taking a stand to amplify their voice and standing their ground to let whatever city or country know that they’re here to stay. They’re an identifiable part of building that city” — and they’ll be an integral part of defending it. 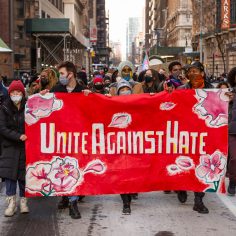 After the Atlanta spa shooting, I, alongside the feminist collective Asians4Abolition, gathered to mark the... 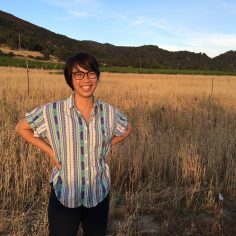 Mai Nguyen grew up in San Diego to refugee parents from Vietnam and studied geography at University of... 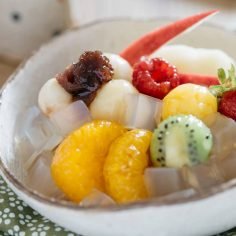 Gathering Around the Table with Asian Comfort Foods

With COVID-19 slowly becoming a haunting memory thanks to the rapid distribution of vaccines, the return of...