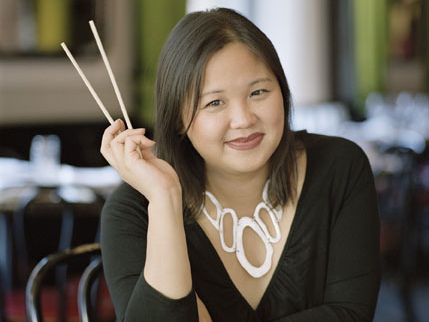 Believe it or not, Jennifer 8. Lee did not grow up dreaming of becoming a journalist.  Instead, she aspired to be what few little girls dream of—an investment banker. As a 13-year-old, before Wall Street’s heyday, she stumbled upon a children’s guide to investment banking. The book painted a wonderful picture of how investment bankers help build a better world. The idea may seem humorous given today’s economic climate, but for the self-proclaimed science and math geek, Lee believed the profession “seemed like a good and honorable thing to do, being able to build the infrastructure of the country.”

At Harvard, she continued to follow her passion for numbers by majoring in applied math and economics, but ultimately decided against an investment banking career. “Everyone in college wanted to do investment banking, but I was never someone who wanted to do what others wanted,” she recalled. Her need to avoid following the herd is clear—after all, how many people do you know with a number for a middle name?

Journalism, though, was not something Lee stumbled into. During high school, she was editor-in-chief of her school newspaper, had entered many writing contests and was a writer for The Harvard Crimson. She remembers being a “painfully mediocre writer” until spring of her junior year.

During the summer between her junior and senior year of high school, Lee decided she wanted to become a journalist after attending a Dow Jones program for minority youth. She wrote a story about how organizations used arts to help gay teenagers open up about their sexuality. After interviewing and being touched by the story of an African American gay teenager who had tried to commit suicide twice, she realized that through journalism, she was “able to listen to people’s stories and give them a voice.”

Now, Lee is a well-known, influential Asian American journalist, having worked for eight years with The New York Times, which she joined at the age of 24, and also as an author of The Fortune Cookie Chronicles, which examines how Chinese food in America is very much American. She explained that The Fortune Cookie Chronicles is “an allegory of self. You look at this thing—it’s Chinese, but made in America.” While conducting research for the book, she reached out to the Chinese diaspora, finding it amusing to encounter ethnically Chinese individuals like her who were not only American, but also Indian and African.

The success of the book led to an appearance on the Colbert Report as well as a TED talk, both of which Lee credits for legitimizing her in the eyes of Silicon Valley professionals. After accepting a buyout package from The New York Times, Lee is doing less writing and more of what she calls “structuring.”  She describes herself as an “operational and systems person” and is keen on building a system that departs from legacy media, such as newspapers, and moves toward new forms of media.

While “many people have been lamenting the death of print,” Lee believes that the industry is due for its next stage of evolution. Lee is excited to contribute to shaping the future of journalism, which she believes will revolve around “knowledge sharing, building relationships and furthering the osmosis between techies and writers.”  Through her involvement with Hacks/Hackers, Lee works with  journalists and techies to build a system in which writers can reach a broader audience through different forms of media and allow them to become more business-savvy and marketable. For Lee, this is particularly relevant in today’s environment where blogs and online journals highlight the prevalence of web-based self-expression.

For this reason, Lee is pushing for journalism’s next wave, which will allow people to connect more extensively through social and digital media. For example, she is working toward the proliferation of low-cost, open-source tools such as WordPress, the transformation of Wiki software to being geographically specific and for primary source materials to be available to the public. If her work succeeds, we can look forward to a world where journalism is even more revolutionized. This will be when formerly private videos, photos, documents and programs become more available and individuals immerse themselves in the journalistic process.

As Lee looks forward to journalism’s future, she also reflects on her own successes.  Thinking about the advice she would give her teenage self, she said, “It will all work out.  Everything happens for a reason, even if you do not know what the reason is at the moment.” Clearly, she has taken this advice to heart. From dreams of investment banking to esteemed journalist and author, Lee has transformed herself and will continue to do so by strengthening the relationship between tech-savvy and content-minded individuals and welcoming the changing media landscape.