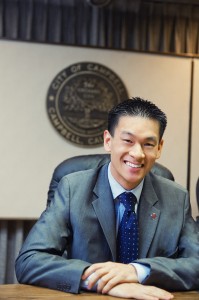 At age 23, most of us have just graduated from college. We might be wrapping up a summer internship, looking into medical or business school or starting a full-time job.

When Evan Low turned 23, he was winning a City Council member election in Campbell, CA in the heart of Silicon Valley. Fast forward three years to 2009, and he had become the youngest Asian American and openly gay mayor in the entire nation.

In the few years that Low has appeared on the political radar, he has become quite an inspiration to populations of Asian Americans, LGBT groups and young people in general for affecting change—but it hasn’t always been a smooth ride.

Low hadn’t even planned on being involved in politics in the first place. Though community service was always a passion when growing up, he first imagined himself in the classroom, passing on his visions as a teacher. And, unsurprisingly, his eventual choice to pursue a political career was met with great concern on his parents’ part.

“In the Pacific Islander community, like in my family, we don’t like to get involved,” he explained. “We want to keep quiet and we don’t want to stir up trouble for other families. But politics is the opposite of that—you’re always under the microscope, you’re always being criticized and it doesn’t pay well—it goes against the Chinese culture that I grew up in.”

But that’s precisely the reason why Low decided politics was his calling. In a city as diverse as Campbell, where Asian Americans make up the second largest demographic, change and improvement is about representation. Low shares stories of how his presence has made a tangible difference: new residents who only speak their native language have gone into the city hall, for example, saying, “I only speak Chinese, but I know our mayor is Chinese. Can you help me with this issue?”

Ironically, Low’s goals for serving the entire community were met with accusations of selfish interests. He has received hate mail for the media’s emphasis on his representation of Asian American and LGBT groups as well as his stance against Proposition 8.

What can you do in the face of such animosity and misunderstanding? You just have to prove them wrong, Low said. “I think it’s important to be able to set a good example, to be a good role model. You have to demonstrate the abilities of the communities and get through those stereotypes and earn people’s trust.” 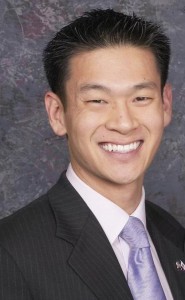 Low also had to battle skepticism surrounding his age. “Typically, young people can be seen as idealistic. People equate age with experience, and being young, people will second-guess your ability to serve in a certain capacity.” But, he argued, experiences can always be obtained—what truly matters in decision-making is a person’s judgment.

In fact, some of the most successful efforts on Low’s long list of accomplishments are due to his youth and innovative spirit. “Technology is inherent; we grew up with Facebook and MySpace and text messages and cell phones,” Low pointed out. So when the council tackles different issues and attempts to encourage engagement, he naturally turns to technology. He’s spearheaded the live-casting and web-streaming of all city council meetings, for example, which is “what public engagement is about—getting people information in different ways.”

And in this paper-saving, budget-cutting solution inspired by his youth, Low has indeed seen concrete results in increased engagement. “For the first time ever, people can go online whenever they want and view the meetings in the comfort of their own home,” he said, citing interested and thoughtful responses from residents who had never attended a single meeting before. Now, even parents who usually run around after kids or pregnant women who are physically unable to attend the gatherings can easily access information about their city.

But, Low emphasized, “None of this is important to me if, by the time I leave or I’m done with this position, I don’t bring other people into the fold and the process.” During his tenure, the city council has also appointed more people from diverse backgrounds in Campbell’s entire history.

For someone so successful in his goals, it might be surprising to know that Low lost a prior election for City Council member in 2004 before he had won in 2006. Instead of letting the loss shake his confidence, Low saw it as an important way to learn the process. “If you ask the average American what they know about running a campaign, I think you’d find few and far between,” he said. “It’s a learning experience and something I was happy to be able to try to do.”

In the end, Low advises, the best thing to do is to find a mentor to guide you through what you want to do: “It’s an invaluable relationship.” But, perhaps the most important message here isn’t about that or even about how much one can accomplish at such a young age. What’s most inspiring about Low’s story is the fact that he failed once, tried again and has since achieved so much—which just goes to show what you can do when you don’t let anything get you down.