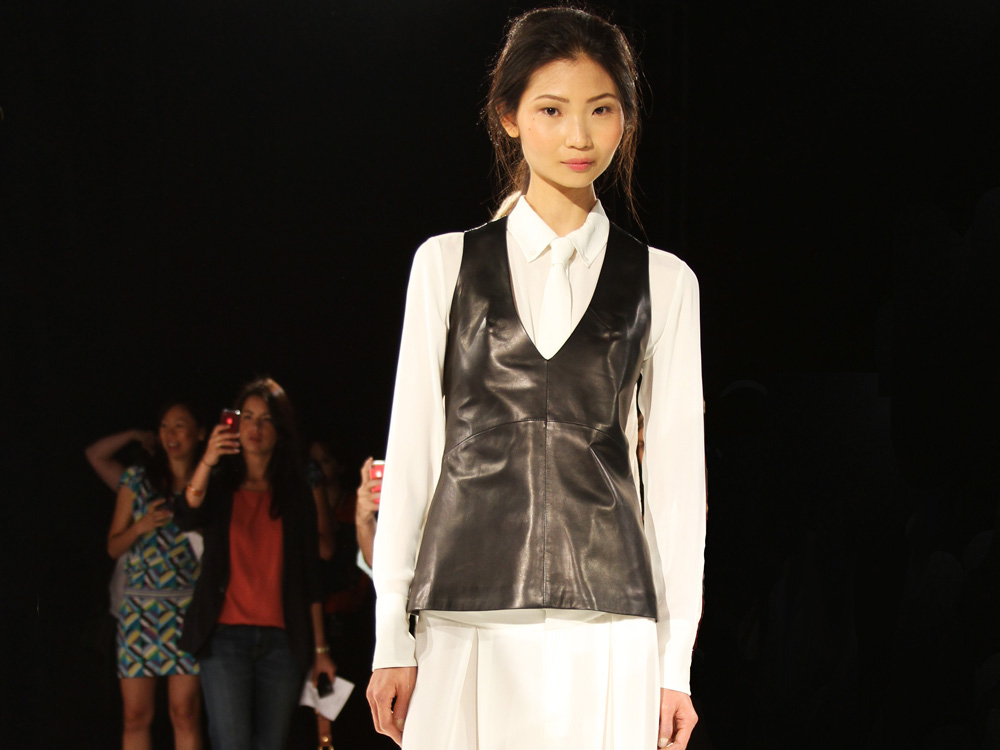 The atmosphere was palpably giddy at the presentation of Marissa Webb’s first-ever solo collection, held during New York Fashion Week in September. The show itself was largely a typical fashion presentation—teetering models perched on podiums under hot lights (instead of a runway), with staffers bringing them cups of water every few minutes; fashion editors and retail buyers carefully inspecting the clothing; and jostling photographers capturing the outfits from every conceivable angle.

What was more unexpected, especially for the Saturday morning timeslot, was the presentation’s cocktail-party vibe. While many designers prefer to stay behind the scenes, especially during a presentation, Webb, the former head of womenswear design at J. Crew, popped out from backstage and spent the majority of the event greeting old friends, doing TV interviews, and posing for photos. With a funky soundtrack that included Santigold and The Walkmen wafting through the room, you could almost forget that you were at a fashion show in the midst of the hectic Lincoln Center, except when the designer dashed over to a model to fix an askew lapel or a stray strand of hair.

The Korean-born Marissa Webb was adopted at age four, with her three biological siblings, and raised in the United States, bouncing from Delaware to Pennsylvania to New Jersey. Though she enrolled at Rutgers University to study philosophy, she quickly found it wasn’t her true calling and headed over to the Fashion Institute of Technology in New York. “I can’t speak for everyone, but I think that most people who go to school for fashion design dream of having their own line someday,” says Webb.

Though the designer grew up with tomboy-ish tendencies, it was a mix of influences that inspired the 20 looks in her debut collection. “It’s always the balance of two different elements,” says Webb. “The hard and soft, the masculine and feminine. I don’t steer all in one direction. I’ll pair a well-tailored, mensy-looking suit with a pair of heels.” Much of the palette was black and white—a leather vest here, a floaty sundress there—but there were also pops of crimson and a psychedelic tie-dye-esque print. Standout items included an olive-green blazer paired with a neon yellow blouse and sequined shorts, and wide-legged white pants with a black stripe down the side. Impressively, Webb also found the time to design a few clutches and the pointy-toed, ankle-strapped shoes for her presentation as well—inspired when she realized her models wouldn’t have anything to stand in.

This may have been Webb’s solo debut, but it was far from her first show at Lincoln Center. Before her departure last September to work on her own line, she spent 11 years at J. Crew, lending her creative eye to the brand. Thanks to careful leadership under CEO Mickey Drexler, President Jenna Lyons, and arguably, Webb’s critically honed sense of design, J. Crew has been having its moment in the spotlight, enjoying an unprecedented amount of success and attention compared to its mass-market counterparts. “At J. Crew, I was used to coming up with extravagant mood boards,” says Webb. “But that wasn’t the way it worked with this first launch. I started sketching organically, and it just came together while we were having fun.”

The line, with a starting price point of $400, was put together in just under a year, with much help from her family—her brother Josh built the website, and her sister Jessica was a big asset as well. She also brought on Joanna Song, a former designer at Twinkle by Wenlan. “You have to work your butt off, but love what you do,” says Webb. “If you stay humble, you’ll learn something new every day.” Apt advice from an industry veteran striking out on her own. While there were a few sleepless nights, especially leading up to the show, they didn’t faze Webb: “I’m not a big sleeper, anyway.” Somehow, we’re not surprised.