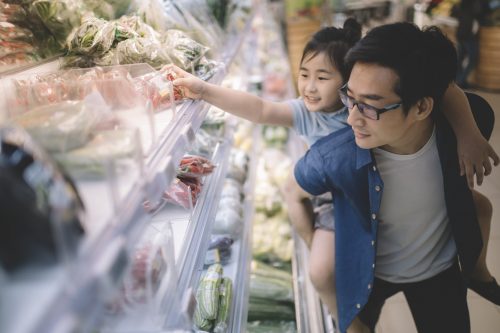 I basically grew up in the 99 Ranch Market in Irvine, California. At the back of the store, a seafood section is filled with tanks and fish on ice releasing that unmistakable salty, fishy smell. In one corner, my sister and I would pat the freshly hot packs of tofu, and in another, we would trace the lines of golden roasted ducks hanging from metal racks, dripping with oil. The hot food section is where our family would often stop to eat fantuan.

Sometimes, if we went at the right time, we’d be greeted with flashes of red and stacks of mooncakes. I’d either look for the cakes with red bean filling or flock to the snack aisle to peruse plastic jelly jars, while my mom tapped on watermelon to test ripeness.

Always, we would leave with fingers straining at the handles of plastic bags filled with fresh fish, vegetables, and the gentle clinking bottles of soy sauce and sesame oil and vinegar. When we finished shopping, we’d grab dinner at any nearby restaurant — there were almost always too many to choose from. It was as if 99 Ranch was the beating heart of the plaza.

Grocery stores and shopping trips may seem otherwise insignificant throughout our daily routines, but for me, and for many other Asian families, these stores are not just sources for the food we grew up eating. They are places of joy and, moreover, safety. For the hours that we spend underneath those fluorescent lights and wandering through seemingly endless aisles, it feels like we have never left home.

Supermarkets are the giants of my childhood. For my family, stores like 99 Ranch or H Mart were our go-tos for groceries. From Chinese herbal remedies to new snack cravings to run-ins with old friends we hadn’t seen in a while, we could find anything and everything we needed in these stores.

I could write countless love letters to those shopping trips that simultaneously felt like an escape and a return to someplace unforgettable. So I wanted to ask other Asian Americans if they experience the same euphoria and longing at their favorite Asian grocery stores as well.

When Hikari Harrison was little, she would spend hours in Mitsuwa Marketplace with her mom every weekend, meeting other Japanese kids her age or learning origami in Kinokuniya.

“It was just my main exposure to Japanese culture when I was a kid, before I started going to Japanese school,” she said, now a junior at Carnegie Mellon University.

Like other Asian supermarkets, Mitsuwa features more than just produce. Japanese restaurants selling ramen or soft serve ice cream are found side by side with checkout lanes, along with CD rental shops and manga stores. Harrison and her mom would spend a day and hundreds of dollars there, eating a lunch of ramen before going home to unload their groceries for the next week.

Though demographics have changed since her childhood, and Mitsuwa has become a place for more and more non-Asians to also come and purchase Japanese goods, Harrison still remembers the shopping complex fondly.

And she still gets that ramen.

“I have those aisles memorized like the back of my hand,” she said.

Asian grocery stores, however, don’t just make up the memories of our childhoods, but also our parents’. They are places for children to grow up within their own cultures and for parents to remember how they grew up as well.

Roaming down the aisles with her parents, who grew up in the Philippines, Seafood City was where So would hear her mom talk about all the things she and her sister grew up eating. Now, So and her own sister pick out all the snacks their parents ate as children too.

Whenever she returns to Seafood City after a long time away, So relishes in the familiarity it provides. She said, “It feels like home. It’s the food I grew up eating.”

Even in places away from hometowns, Asian supermarkets have a way of providing this comfort. Pooja Kowshik, now a junior at University of Southern California, found solace in Waltham India Market after moving to Massachusetts for the summer. The first thing she sees before shopping is a man standing outside the store, chopping up coconuts the same way someone in India would. And when she goes in, she knows she can buy all the produce and spices she needs to make the food her family cooks at home.

“You go in and you hear the people speaking the language that my parents speak,” she said. “It’s a community feeling.”

Whether they are “mainstream” stores like Mitsuwa or 99 Ranch, or smaller mom-and-pop shops you might find at busy street corners, Asian supermarkets have undeniably become our cultural lifelines.

Often, the burden of assimilation falls upon immigrant communities. And often, the burden becomes too heavy to bear alone. It’s stores like Pearl River Mart, founded in 1971, that become places for immigrants to land their first jobs after moving to the United States. It’s stores like H Mart that remind us, when eating among people who look like and understand us, that we are not alone. It’s stores like Patel Brothers that let Indian community members post about singing and Bollywood dance lessons on bulletin boards, classes that Kowshik and her cousin took when they were little.

As the Asian American population in the United States grew, so did Asian supermarkets to fill the demands for Asian necessities within these communities, as is the case with 99 Ranch Market. It’s these supermarkets that help Asians thrive, and it’s Asians (and the BIPOC people who staff the stores) who breathe life into these spaces.

Now, as populations are constantly in flux, such markets have grown to appeal to non-Asians too. In fact, these stores may be a non-Asian’s first major introduction to Asian cuisine. Though sometimes the experience of going to an Asian store may fall victim to the idea of being “exotic” adventures (because of how different the food may seem compared to Western or American palates), one thing about these supermarkets has remained beloved and unchanged to me: I find safety behind each of these glass doors.

Whether I am returning to my hometown, where my friends understand my language and struggles, or coming from somewhere I feel alone or out of place, I will always have a safe space here. I will always be greeted with stacks of newspapers in my parents’ mother tongue and aisles of foods I know I love or itch to try. Even if it’s some place I’ve never been before, I will instinctively know, like I know the back of my hand, where to find everything I need.

Beyond providing the essentials we need to nourish ourselves – food – these stores let us feel nourished among our own people too. Because these stores are places of relief and safety, knowing that there, we will not be in the minority.

Coming Home, Away From Home

For college, I moved to Evanston, Illinois. To go to a store like H Mart or Mitsuwa was to embark on an hour-long bus ride or a car trip half as expensive as the groceries themselves. What were once weekly shopping trips in my childhood turned into once-in-a-while day trips as a young adult.

But the first time I stepped back into an H Mart, after almost an entire year of being kept away, I felt joy like it was the first 50-degree day after a long, snowy winter. My friend and I threw packs of dried seaweed, tteokbokki, and instant noodles into our cart like we’d been deprived of them for decades. I piled cans of lychee drinks among packs of Calpico I was sure to scarf down within a day, eager for everything that looked remotely familiar.

At the end of the day, with the sky darkening and an evening chill setting in outside, we stopped by the food court to top off our trip with steaming Korean corn dogs.

I’m sure we looked silly to anyone else, two college kids giggling and shaking their heads with a cart full of too many plastic bags to carry back in one trip.

But when I eat with my friends over two tables shoved together, or when I count the roasted ducks displayed in the window of 99 Ranch with my family, I know I will freely relish everything in myself and everywhere I am from. This is the essence of Asian supermarkets that I hope and know will never change: Even when I am far from home, they are where I can go to be at home. 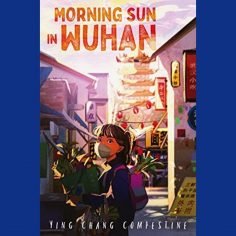 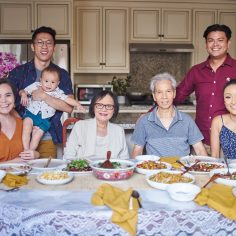 With Three Generations of Family, “Made with Lau” Takes YouTube Cooking To New Horizons