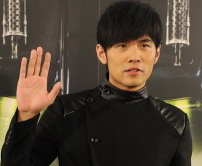 It’s highly likely that you’ve heard of Jay Chou before—he’s the Taiwanese singer-songwriter behind hits such as “Cute Girl (Ke Ai Nu Ren),” “Simple Love (Jian Dan Ai),” and “Silence (An Jing).” If you haven’t heard the original songs, you may have seen YouTube covers by Mandarin and non-Mandarin speakers alike (our favorite: sisters Riney and Bam, who used Chou’s music to learn Chinese), or heard his catchy melodies while singing karaoke.

If you’re a fan (or if you grew up in Asia), you may have even caught him on the big screen. He’s acted in movies such as “Initial D” and “Curse of the Green Flower,” and even directed a movie called “Secret” in 2007, with a sequel planned for next year.

But if you haven’t heard of Jay Chou before, get ready to get introduced to him in January, with his first foray into Hollywood as Kato in “The Green Hornet.”

“I’ve always felt an affinity toward movie adaptations of comic books,” Chou said. In fact, his first starring role was in “Initial D,” an adaptation of a Japanese manga series. But Chou has chosen what is far from a low-pressure role to introduce himself to American audiences. Aside from an immense fanbase of its own, “The Green Hornet” also stars A-listers such as Seth Rogen and Cameron Diaz. 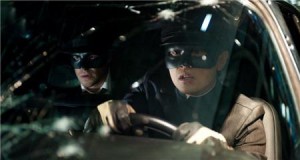 “When I was chosen for the role, I was extremely excited,” Chou said. “This is an opportunity for people to get to know me, especially those who don’t know my music.”

Not that Chou really needs the additional exposure. He got into music at age four, when, like many Taiwanese children before and after him, his mother pressured him to study piano—and study it hard. He recalls how strict she was, making sure he practiced every day, but he also credits her with building the foundation of his musical career. And when he started listening to pop music, he decided to take a stab at writing his own songs as well. Since then, he has become possibly the most recognized pop star in Asia, with hit after hit, album after album.

Chou’s musical success has always been somewhat of a safety net for him. When auditioning for the role, he wasn’t too stressed.

“Movies are a sort of hobby for me,” he said. “Music is my business.”

But when Hong Kong actor Stephen Chow dropped out of “The Green Hornet” and the role was given to Chou, he gave it his all. Aside from studying Kung Fu and driving techniques (the original Kato was a valet for main character Britt Reid), Chou had to work hard on his English. 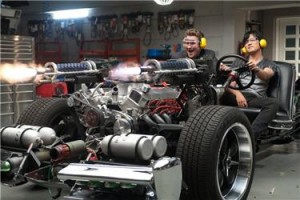 “In between filming, I had to practice my English, which was very tiring,” he said. “Even as a student, I was never good at English, so getting reacclimated was nerve-wracking. My only relief was the director, who told me my English was getting better and better.”

Another difficult part of filming “The Green Hornet” was getting the comedy right.

“I’m not a funny person,” Chou said. “As a singer, I put on a cool persona, and rarely joke around. But when acting with Seth Rogen, who is hilarious, I had to try to be just as funny as he is. And that’s hard.”

If audiences respond well, Chou could become an international star—one of the most difficult barriers for Asian artists to break through. But even if they don’t, Chou is grateful that his career has allowed him to be selective about his projects, and make only the type of music and movies he is passionate about. As he should—Chou is nothing if not a hard worker. As 2010 wraps, he is getting ready to go promote “The Green Hornet” internationally with cast and crew. In January, he’ll play concerts in Los Angeles and San Francisco to further promote his music and movies. And finally, while he plans to keep acting in 2011, he hasn’t lost sight of his claim to fame.

“I put out a new album every year—that’s an absolute must.”

Note: This e-mail interview, conducted in Mandarin, has been translated into English by Mochi editors.