Home Entertainment, FashionWhere In the World Is La Carmina?

Where In the World Is La Carmina? 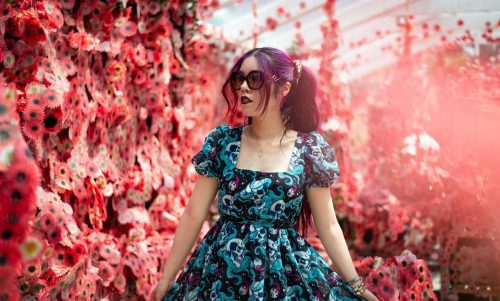 If you Googled La Carmina before reading this post, you wouldn’t assume that the woman dressed in a lavish Japanese Harajuku get-up is the same young woman who studied at Columbia University and earned a J.D. from Yale. But if you went on to read other search results on La Carmina, you would come across her blog, which is filled with photographs of a well-traveled woman who has an eclectic, vibrant taste for fashion, reports on the subcultures of the world, adores Hello Kitty, and has a serious knack for putting together the most cutesy and gothic pieces of clothing.
“It’s funny when people ask if I wanted to be a blogger because only five years ago, blogs hardly existed! Growing up, I wanted to do something creative; I loved fashion, subcultures and presenting. However, I couldn’t see a clear career path, since it’s very difficult to start and sustain an entertainment career, and I had no connections in this industry,” La Carmina says.

With La Carmina’s daring and outrageous fashion style and immense knowledge about Japanese subculture, it’s also surprising to learn that she was born and raised in Vancouver. As a child, she would make frequent trips to Hong Kong, where her parents are from, and other parts of Asia, including Tokyo. By the time she was in her teens, La Carmina started wearing Harajuku street style and kawaii makeup. And with her love for Hello Kitty stationary and Koala chocolate snacks, it was only natural to start her own blog on Japanese fashion and subculture. 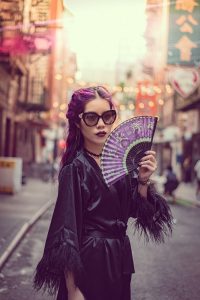 “I felt a strong connection to the alternative Goth Punk scene in Harajuku: a place for misfits to band together and express themselves through their clothes and culture. Not many people were aware of this scene outside of Japan, so I was compelled to share this wonderful world of Visual Kei bands, Gothic Lolita designers, and wild club nights through my blog,” La Carmina says.

La Carmina started her blog in September 2007, posting about Japanese fashion, food, and alternative nightlife. And like many Asian and Asian American bloggers who have found success with new media, she used the power of blogging, YouTube, and social media to express herself. Soon enough, her blog exploded to the pop culture and fashion scene, and a career was born. Since La Carmina started her blog in 2007, she has become a Travel TV host for the Travel Channel, National Geographic, the Food Network, Discovery, CNN, and more. She has also written for CNN, AOL, and The Huffington Post and authored three books about Japanese pop culture. A true renaissance woman, La Carmina also runs a TV hosting and arranging company called La Carmina & The Pirates, in which she and her team of “pirates” go out into the streets of Japan to cover Cosplay, Gothic Lolita fashion, music, art, and youth subcultures. 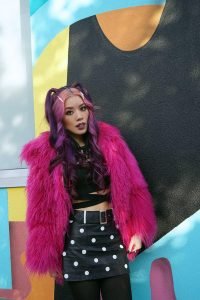 So how does a Harajuku girl decide what she wants to wear in the morning? “I like to experiment and do my own take on various subculture styles (from Victorian to Cyber). However, there’s often an element of death, cats, eyelashes and pirates,” La Carmina says.

La Carmina will be spearing at Social Media Week in Hong Kong. Her episode about Tokyo bagel-head body modifications aired recently. To learn more about her worldwide travels and adventures, visit http://www.lacarmina.com/blog. Or, follow her on Facebook and Twitter.