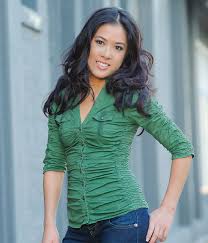 Although Viennie V released her first album Nightmare or Dream in September 2011, she already has something in common with pop sensation Justin Bieber: they both got their start by gaining attention on YouTube. The Los Angeles singer has quickly become viral (she became the number one musician on YouTube just a week after she premiered her first video). Viennie V names artists who like to push the envelope, such as Lady Gaga and Rihanna, as her musical influences.

The rising star has recently released her third music video “For You,” which details her mortifying, yet amusing dating life. After a series of bad dates Viennie finally finds her dream man after “wishing on a falling star” as she fittingly watches a shooting star whisk by at the end of her perfect date.

“For You” was not Viennie’s first attempt at humor. She originally caught attention with her song “Nightmare or Dream,” a parody on the recent vampire craze, and followed her success with her second video “Thinking of You,” which details Viennie’s own take on Britney Spear’s “Baby One More Time” video.

Whether you like her music or not, the pop singer seems to be on to something—both videos gained over a million views and were in the top ten most viewed music videos on YouTube less than a week after launching. Check her latest video out here and see what all the buzz
is about.