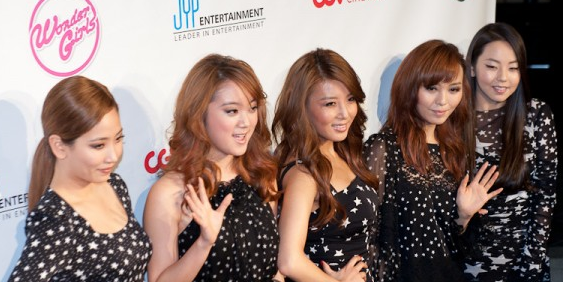 After months of anticipation, the Wonder Girls are finally coming to American entertainment. On February 2, the one-hour special “Wonder Girls” at the Apollo will premiere on Teen Nick, 8pm EST. The girls were recently interviewed by “Access Hollywood” about the movie’s charms. They say, “You get to see scenes about friendship, sisterhood, cat fights, and maybe a little bit of a romance!” Their English has improved a lot since the last time I heard them open for Jonas Brothers a couple of years ago. Glad to see they’ve been working hard. Moreover, the single they released is on the movie’s soundtrack is quite catchy as well. The track is called “The DJ is Mine” and features their on-screen rivals, American girl group School Gyrls. It’s a very upbeat dance song, perfect for attracting new and old fans alike. The song also hints at the romantic plot for the movie with cute DJ in the music video.

In conjunction with the movie premiere, the Wonder Girls are also working on an English debut album for later this year, featuring collaborations with Nick Jonas of Jonas Brothers and Claude Kelly, who has worked with stars like Britney Spears and Kelly Clarkson. I’ve only seen Wonder Girls perform once, about two years ago in Anaheim, when they toured with labelmates 2pm and sang their Korean hits. Now with the impending release of their English debut album, I just might get the chance to watch them perform entirely in English!

Missed the premiere? The entire movie can be found on the Teen Nick website here. Enjoy!

0 Replies to “The Wonder Girls Movie is Here!”