Home Career, EntertainmentMusician Kaz Nomura Opens Up About Life on the Road 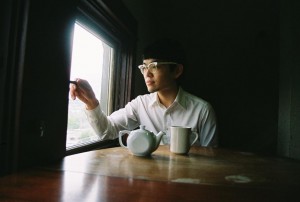 You may have met him at an indie coffee shop when he lived in Brooklyn, NY, or gone to one of his shows in Washington, D.C. If you’re in Seattle, don’t be surprised to find him at some of his local haunts, including Bauhaus and Caffé Vita. And if you were lucky enough to catch the last Clap Your Hands Say Yeah tour, say hello to their opener, Kazutaka “Kaz” Nomura. He also goes by PWRFL Power and Half Yogurt.

Just to set things straight, Nomura started PWRFL Power exclusively as a singer-songwriter. Half Yogurt is him, reinvented as a guitar shredder, as well as music label and tour organizer.

Carrying blues and folk tones, Nomura’s upbeat, poppy lyrics—such as “Let me teach you how to hold chopsticks. You’re so pretty and holding them. You’re so pretty, but holding them wrong”—send listeners on a laughing spree. Long intervals of acoustic guitar shredding—soothing, yet engaging—leave them entranced and audibly content.

Whoever said “experience is the best teacher” was spot on. Nomura has toured around the U.S. twice and then in Japan. Half Yogurt has produced for indie artists such as Olympia’s Geniferus, Ed Askew and Dennis Driscoll, among others. Along with all this, Nomura is still making music and performing. He even got married to fellow artist Tennessee “Cap Lori” Rose.

On one of the rare sunny days in Seattle, Mochi got a chance to sit and sip with Nomura. Here’s a little on the life of the artist.

Mochi: So you’re from Asahikawa City in Japan. How’d you make your way to Seattle?

Kaz Nomura: In Japan, I had an English teacher who graduated from the University of Washington. She was also Mormon. I originally wanted to study jazz music composition, and she said I should go to Salt Lake or Seattle. I thought, “Well there’s nothing in Salt Lake,” so I went to Seattle.

I took English as second language classes at Shoreline Community College and then went to Cornish College of the Arts for classical music composition. It was really nice because I got to tour while I was still in school. [Cornish] was really laid back. I would say, “Oh, I’m going to do a show in Portland,” and my teachers were OK with it. I’d go for a couple weeks, come back, and go to school.

Mochi: Then you moved to Brooklyn…

KN: I was dating a girl who was the director of a commercial agency over there. I moved for her, but it was also time to leave Seattle because I was playing at the same places over and over again.

I was touring every other month, and I played along the East Coast. My favorite city was Washington, D.C., because I made many friends there and played a lot of shows. I also liked Providence, R.I.

But it gets old if you keep doing it. Up to the fifth time you get to play somewhere, it’s fun, but it’s kind of like going from work to your place. You get used to it. You know which cafe you’re performing at and where to go.

KN: I was performing at the Capitol Hill Block Party and she was in the audience. After the show, she came to talk to me at the merchandising booth. I got married in August. Tennessee and I went to do a lot of sightseeing. I think we stayed there for 10 months. We also toured around Japan. I think we performed, like, 50 shows together. We toured everywhere and went to most of the major cities.

KN: Most people didn’t understand what I was singing, but they still liked it. I think they’re intrigued, and they feel some pride in seeing a Japanese American singer. People also told me they like the music, even if they don’t know the lyrics. They seem to appreciate what I’m doing. I wanted to hang out with people from the Japanese music scene. I ended up opening for Clap Your Hands Say Yeah in their last tour, and that was really cool. All the shows sold out.

KN: I stay with friends a lot. Usually, I don’t have a solid place to live. I couch surf. It’s fun to spend some time in one neighborhood and then in another one. I don’t really have a lot of stuff. I usually bring two suitcases full of stuff. Half would be CDs and half merchandise. The rest are clothes. You don’t need much. You can eat out, so you don’t need cookware. I live like a homeless person. I have my stuff and my guitar.

Mochi: And the wife?

KN: She wants to come on tour. It would be more efficient if I did it alone, but it’s still fun and nice to have company all the time. She’d open for me.

Mochi: How about the parents?

KN: They’re very supportive. They come to my shows when they’re in town. I think they’re happy for me. I save up enough money and do well enough to keep going.

While Nomura enjoys the couch surfing and traveling, he plans to stay in Seattle for a while and settle into married life—for now. “I like going back and forth, but I don’t want to just be the guy who’s here or some guy touring all the time,” he said. “I like where I am.”

Read more about Kaz Nomura, his music and his label at www.halfyogurt.com.