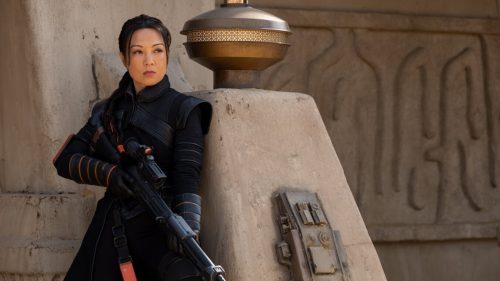 Born in Macau and raised in Pennsylvania, Asian American legend Ming-Na Wen did not have Hollywood parents to get her foot in the door. Her first introduction to show business was a third grade play where she fell down, much to the audience’s amusement, instilling a lifelong love for performing. Since then, she has gifted fans with a steady career of dynamic characters, most famously the eponymous heroine in the 1998 Disney animated film “Mulan.” In an ideal world, a hard-won acting career like Ming-Na Wen’s would be as fully recognized and lauded as that of her white counterparts.

As Wen enters the global cultural phenomenon that is the “Star Wars” universe, her iconic roles and long career — not to mention the fact that she does her own stunts — seem to finally be getting the attention and traction she deserves. In order to fully appreciate her current role in “The Book of Boba Fett,” it’s vital to look back at her career and how appreciation for the actress behind trending #FennecShand has been long overdue.

On television, Wen showed her chops in medical drama “ER” as Dr. Jing-Mei “Deb” Chen from the mid-1990s to the early 2000s. She followed up with a stint as Camille Wray on the sci-fi series “Stargate Universe.” Then, she won over a whole new generation of Marvel fans as pilot and intelligence agent Melinda May in “Agents of S.H.I.E.L.D.” Wen remains the only actor to complete a “Disney Hat Trick” as the Disney warrior Mulan, Marvel spy May, and Star Wars baddie Shand: characters that are all now owned by the House of Mouse empire.

But beyond Disney franchises, Wen also gave a poignant performance as June in “The Joy Luck Club,” and she breathed life into Chun-Li in the “Street Fighter” video game’s film adaptation. Portraying pathos as an immigrant’s conflicted daughter and then playing the iconic bunhead martial artist within a year sounds like a career move akin to what Angelina Jolie did the following year with “Tomb Raider” and her subsequent Academy Award-winning role in “Girl, Interrupted.” In comparison, Wen received very few accolades for her breakthrough performance as June Woo. While “Joy Luck Club” received nominations for its directing and screenplay, Wen’s acting was overlooked.

In the 25th anniversary interview on “The Joy Luck Club,” Wen told Deadline, “When ‘Joy Luck Club’ came out, I felt like a lot of people saw it as a foreign film and not as an American film. And it didn’t get the recognition or the accolades during the Oscars because, I think, so many people thought of it as a foreign film, even the Academy members.” This statement echoes actor Steven Yeun’s questioning of his film “Minari” and its slot as a foreign film in the 2021 Golden Globes (whose backing institution The Hollywood Foreign Press is virtually defunct due to controversy such as having zero Black members for two decades) — even though “Minari” tells the story of a distinctly Korean American immigrant family in the 1980s.

In January 2022, Wen told People Magazine that she “always sought out non-traditional parts that weren’t necessarily written for Asians.” After graduating from Carnegie Mellon’s School of Drama in 1986, Wen beat out white actresses for a lead role on “Friends”-adjacent (“Friends” character Ross Geller appeared on one crossover episode) sitcom “The Single Guy.” Wen said the final audition process came down to her “and a bunch of Caucasian actresses” for the role of Trudy, a neurotic art gallery owner. However, Wen convinced the producers to cast her by making them laugh in the audition room, proving her comedic talent. She was the only lead in the ensemble show’s first season to be a person of color. While Black actor Shawn Michael Howard joined the show’s second season, a hefty majority of the mid-’90s sitcoms set in New York City failed to reflect the true racial diversity of its settings. This is how much Wen challenged the status quo as Trudy.

It seems Wen’s roles have often been ahead of the curve in terms of social progress; in “Stargate Universe,” she played the series’ first openly gay character starting in 2009. When asked by The Huffington Post about playing a gay character, Wen tied together the intersectionality of identity with her response: “Being a minority, being an Asian American and a woman, a lot of times there are a lot of sensitive issues, and you’re dealing with a minority group that is extremely vocal [for] a good portrayal of a gay character. So shouldering those responsibilities along with the writers, I felt that it would be a challenge on a social level.” In the same interview, she also highlighted her interest in the “Star Wars” franchise a decade before she was casted in “The Mandalorian.”

With “Agents of S.H.I.E.L.D.,” “Stargate,” “The Mandalorian,” and “The Book of Boba Fett” under her belt, Wen has created a comfortable niche within the science fiction television realm. And this foray into these expansive worlds seem like a positive signal for other actors of color. While films like “Minari” and “The Joy Luck Club” were overlooked by the Hollywood establishment, powerful fan love for science fiction drives Wen’s roles to commercial success, if not critical success.

Along with Asian American and LGBT representation, Wen also brings attention to ageism in Hollywood. At age 58, Wen noted at a recent press conference for “Boba Fett,” “It used to be when women hit 40, they were put out to pasture.”

As space is represented as the great utopia, the final frontier, people of color find a representative avenue that allows for multi-dimensional, unique characters from all ethnic backgrounds and ages. Science fiction allows anyone to be heroes, especially when you consider sci-fi conventions such as aliens and glowing swords, among other far-fetched things. The suspension of disbelief that science fiction already requires, questions the existing preferences and biases of white, male-dominated Hollywood. While the original “Star Wars” trilogy had no Asian American actors, white and male creators in mainstream media spaces are now forced to reckon with the portrayal of universes meant to contain the endless possibilities of science and magic. Why would a science fiction universe today that includes spaceships and aliens of all shapes, colors, and sizes have no Black or Brown people?

So actors like Wen and George Takei of “Star Trek” fame challenge Hollywood’s odd casting trends, creating iconic and powerful representation within the science fiction genre specifically. In a 1995 interview with the LA Times, Wen expressed the thoughtfulness she applies to roles as an Asian American actress: “To be careful of the choices I make, the things I say [as a public figure]. I think that if I’ve made decent enough choices that might make me a role model, that would be cool.”

As a self-identified geek, Wen has stated multiple times that playing bounty hunter Fennec Shand is a dream come true for her. Wen’s love of science fiction even included being president of her high school science fiction club. Growing up in the Pennsylvania suburb of Mount Lebanon, Wen’s love for “Star Wars” started early with the original franchise and specifically, Luke Skywalker. Wen connected to Luke’s journey of being thrust into Jedi training from his humble beginnings on Tatooine, and she found parallels with her own aspirations of being an actress: “For a little Chinese girl wanting to be an actor, that was not a thing my parents wanted for me or an easy profession to go into. The culmination of being in [‘The Book of Boba Fett’] is truly the American dream.”

But far before the badass dream role, Wen had to make specific career choices unique to Asian American performers, avoiding stereotypes while also negotiating her genuine interests and talents. Wen told Australian pop culture site Junkee, “I tended to stay away from action after [‘Street Fighter’] because I was concerned about falling into that stereotype of, ‘Oh, you’re Asian so you must know martial arts.’ It wasn’t until I became a mother that I realized it’s not something I should be ashamed of.”

With so much thought and heart put into each of her roles, Wen’s characters serve as robust representation for our communities, while Wen’s long career provides inspiration to many budding Asian American actresses. Aware of the adversity facing Asian Americans in Hollywood, Wen never goes the bitter or entitled route. Her love of storytelling and dramatic worlds shine through in her interviews where she has often welcomed and made references to the roles she played five or fifteen years ago.

The issues of substantial representation still matter today: USC’s Annenberg Inclusion Initiative reports that less than four percent of leads and co-leads in the highest grossing Hollywood films from 2007-2019 went to Asian American actors. While these numbers are abysmal, we can look towards Ming-Na Wen’s successful conquest of television as a sign of hope. As Wen recently told People Magazine, “It will always be a struggle, but we’ll keep pounding the pavement and making sure it’s easier for the next generation.”

Check out the finale of “The Book of Boba Fett,” starring Ming-Na Wen (@mingna_wen) and Temuera Morrison (@tem_morrison) on Disney+.