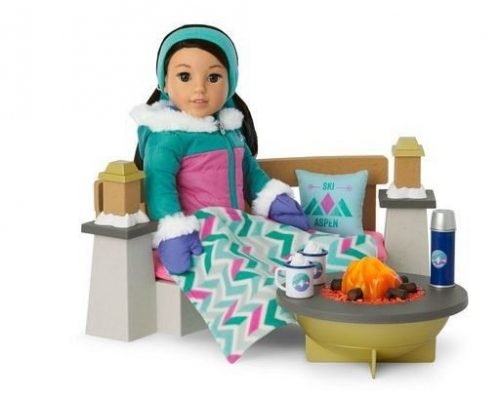 Introducing American Girl’s newest “Girl of the Year”: Corinne Tan, the first Chinese American doll to be given the title. For over two decades, the company has debuted Girl of the Year dolls that feel like modern girls with modern-day lives, including challenges like hearing loss or interests in wildlife or space exploration. One of the main draws of the dolls — aside from the $110 price tag — is that girls can have a doll that looks like them: Gabriela McBride (2017) is African American, Luciana Vega (2018) is Chilean, and Joss Kendrick (2020) wears a hearing aid.

Despite efforts to diversify the line, fans and critics alike have critiqued the Mattel brand for the messages the dolls send and what they represent. Upon her release, Corinne got reactions ranging from criticism to excitement.

As the 2022 Girl of the Year, Corinne is very much based in the present day pandemic. Corinne is an 11-year-old living in Aspen, Colorado, where she faces comments about the “kung flu.” She gives her phone to her younger sister, Gwynn, when she gets a new one. And she’s adapting to her parents’ divorce.

To develop Corinne’s story, Chinese American author Wendy Wan-Long Shang wove together several themes: a blended family, friendship, socioeconomic status, and anti-Asian racism. However, the reaction was not all positive. Some people claimed that Corinne’s blue hair streak is to make up for her lack of personality or that it perpetuates the stereotype of rebellious Asian women with colorful hair. Others accused Corinne’s backstory of betraying its Stop AAPI Hate message because Corinne’s mom married a white husband.

However, both criticisms ignore the story that Shang actually created for Corinne. Instead of setting up Corinne’s stepdad as a model stepfather or husband, Shang takes the opportunity to explore what Arne fails to understand as a white man. In fact, Corinne’s frustration at her stepdad’s dismissive attitude toward racism is one of the storylines in the book.

In one instance, after learning about the Chinese Exclusion Act in school, Corinne goes to tell Arne about it. But he takes a phone call instead of having a conversation with her. It is one of the many times that Arne avoids talking about racism with her. In another, a boy comments that he would not eat in Corinne’s mom’s restaurant because of “the China virus,” which Arne brushes off as bad “manners.” Even worse, he tells Corinne, “‘If we talk about that boy, it’s like letting him win.’”

“That kind of cluelessness is just as, if not more, rampant as the more overt kinds of racism,” Shang explains. “Arne thinks he’s doing Corinne a favor by not talking about it. As we see in the news, a lot of people think you make racism worse by talking about race.”

For Corinne, this clueless, well-meaning kind of racism doesn’t only come from strangers; it also comes from within her family.

On the other hand, Corinne and her sister Gwynn love spending time with their biological dad, who is one of the best characters in the story. He supports the girls during their transition to living with their stepdad, and although it is not easy for him, he doesn’t let it change how he cares for his daughters.

Shang doesn’t shy away from depicting the reality of how the coronavirus has affected some Chinese Americans’ livelihoods. As a ski instructor, their dad wasn’t able to make any money because the resorts closed. Nonetheless, he spends quality time with his daughters by making the best of the situation, showing them a “busman’s holiday” at the resort he works at.

One of the highlights of the book is when he stargazes with the girls and shows them the Seven Sisters. “‘They’re all Greek names. But the first people to write about the Pleiades were the Chinese,’” he tells his daughters. Corinne notices that her dad is proud of that. It is moments like these that make Corinne’s status as a Chinese American Girl of the Year feel relevant and important.

Beyond the usual signifiers, it’s details like these that burst with pride for who Corrine is: Corinne looks up to Eileen Gu, a U.S.-born Chinese freeskier. (Knowing this, her dad gets her a poster signed by Eileen.) She helps promote her mom’s new restaurant by passing out tiny zongzi to skiers, even though she is shy about it at first.

Of course, being Chinese American in 2022 isn’t all easy. Shang makes full use of the setting of Aspen to display class differences between Corinne’s dad and her stepdad, and between Corinne and her best friend Cassidy. Corinne doesn’t want Cassidy to know that her sister is taking figure skating lessons or that her stepdad is rich. Cassidy is thrifty and she thinks people who live in town, like Arne, are snobby. Corinne feels tension trying to hide what appears to be a life of luxury provided by her stepdad from her dad and Cassidy. However, in reality, the money doesn’t make up for the lack of support when Corinne needs it from Arne most.

As for that other criticism, the blue highlight, there is only one mention of Corinne’s hair, and no personality traits are attached to that description. Shang says that she has a lot of sympathy for what kids have missed out on over the past few years. “They’ve been through a pandemic. Let them color their hair,” Shang says. “They deserve to have some fun.”

Wendy Wan-Long Shang is an author who writes middle-grade books that feature a diversity of Chinese American experiences. Her books include “The Great Wall of Lucy Wu” and “The Way Home Looks Now,” all stories with humor, heart, and a sense of history.

One Reply to “American Girl’s Corinne Tan Tackles Family, Fathers, and Fun as Girl of The Year”