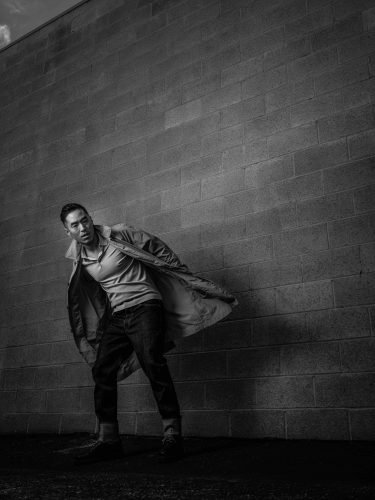 Before vampires and tragic romances, there were wholesome movies starring teens doing regular teen things: taking the SAT and having epic summers, for example. Actor Leonardo Nam can tell us all about that, because those movies were exactly how he broke into Hollywood.

The 40-year-old actor currently plays Felix in HBO’s “Westworld,” but his journey started in Australia almost 20 years ago. “When I first went off to become an actor from Australia to New York, my mom told me ‘Leo, there’s no Asian actors, what are you talking about?’ She thought I was a little wild.” The decision to uproot himself to the other side of the world may have been wild, but it paid off in the best way. In 2004, he landed the role of Roy in a movie where a group of high schoolers conspire to get “The Perfect Score” on the SAT.

Naturally, it’s something for a rookie actor to get excited about. Getting to be a lead and work with established actors in one of your first roles is something to be proud of. “I remember thinking ‘I made it!’” Nam said. “In reality I’d only started in the business and struck gold. It was lightning in a bottle.”

Nam is grateful for the fact that he is still in the business 15 years later, proving that “The Perfect Score” was not an anomaly. In fact, he continued the stint of playing teen guys the following year as Brian McBrian in “The Sisterhood of the Traveling Pants.” The movie is an adaptation of the young adult book series where four girls live apart for a summer and each get their own adventures.

In the series, Brian McBrian is a hardcore gamer, the love interest of Tibby, and presumably white. It was significant that Nam got the role, considering Hollywood’s history of whitewashing Asian characters and few examples of doing the opposite. In regard to changing how fans pictured the character, Nam said “How are you going to argue with 14-year-old girls who cherish this book?”

His portrayal ultimately outweighed potential misgivings from fans because he returned to play Brian in the sequel in 2008. However, it wasn’t easy getting there. “When ‘SOTP2’ came out, there was a possibility of recasting one of the girls in the sisterhood. And there was talk of recasting me. They thought middle America couldn’t fall in love with an Asian guy,” Nam said.

Thanks to Debra Martin Chase, an African American producer who really championed him, Nam was able to stay in the role. The caveat was he had to prove that he was fit for the role. Nam took that advice seriously and got to work. “There was a scene when Tibby and Brian McBrian get into a sexual relationship. I knew that was going to happen. So I trained, I swam, I boxed.”

Eventually, Nam showed off his efforts. “I went in, took my shirt off in the executive room, and sealed the deal. I look back and think that was crazy. But you have to do that. When you have people on your side, you need to do whatever you can for them to stay on your side. And then WB (the studio) got on my side.”

Nam has aged out of playing teenage roles, but acting is never a sure thing no matter how old you are. “Transitioning from teen roles to adult roles was difficult. You want it to happen now and you’re impatient. So many times people have said, ‘You’re a fantastic actor, but you’re too young for it.’ I’m ready for the experience. I hope people keep watching me.”

In 2020, people are still watching. In “Westworld,” Nam plays Felix Lutz, a recurring human character in an artificial theme park. “I get to play the new reality,” Nam said. On screen, it means a dystopian world, and off-screen, the new reality for the actor includes fatherhood.

He is the father of twin 3-year-old boys with his husband. “When marriage equality came around, it was a new generation of change and acceptance. When I got married, it opened up a whole new world.” Right now, that world includes sheltering-in-place with his family in San Diego.

Soon, the audience will be able to see Nam as a father on-screen as well. “There’s a fantastic film I did called ‘Marvelous and the Black Hole’ by Kate Tsang, a new director/writer. In that role, I play the father of a teenage girl.” As an actor who got his start playing teenage boys, things seem to have come full circle.

Nam attributes his success to women and people of color who have championed him and put him in projects. As a message to Mochi readers, he said, “My career has been full of surprises. I look back and think part of the reason I’m still in the business is a gift. Part of it has to do with the fact that women rock. They don’t have to give back, but they did. To me, as the beneficiary, I am grateful for that.”