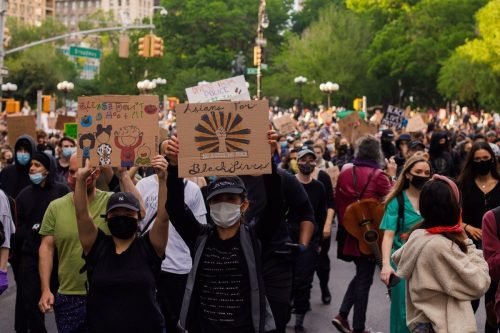 Last week, couples across the country commemorated Loving Day as the day interracial marriage was legalized. This week, Black communities will mark Juneteenth as the day the Emancipation Proclamation reached Texas, which was the last state to hear the news of freedom. Yet this year, these celebrations occur alongside protests against systemic racism. More than 150 years later, the legacy of slavery remains as pervasive as ever, and people of color in this country continue to face injustice of all kinds.

I didn’t identify as a person of color until I was 28 years old. Of course, I knew that I was Asian, but I didn’t think I was any different from my white friends. According to the race-blind narrative taught in my wholesome Midwestern education, everyone was equal and racism was a thing of the past. I winced when my parents made generalizations about Black people being good athletes, but wrote them off as benign, if benighted, compliments.

Over the last decade, I watched the litany of police shooting unarmed Black men with increasing grief and anger. But it wasn’t until recently that I understood that the microaggressions I’d heard so often in my Chinese American community were part of the same system of white supremacy that killed these Black men.

I used to think racism was about white people being mean to Black people. And since I am neither, I was never quite sure what my role in fighting racism was supposed to be. Even learning more about the true nature of racism just brought more questions. Does being non-white exempt me from being racist since I am not of the dominant group? (Absolutely not.) Is it wrong to benefit from policies like affirmative action? (No, but I need to be grateful and use my privilege accordingly.) Is it inappropriate to identify as “marginalized” because of the privileges that I do have? (Also no, but everything I do must center people with less privilege.) And I still have so much to learn.

What I do know for sure is that Black lives matter, and that we need to do everything we can to right the injustices this country was built on. I am learning now about how Asian Americans have benefited from civil rights legislation that Black people marched and protested and died for. I am learning about the history of solidarity and strife between different BIPOC groups. I am learning about my own internalized racism and how I’ve been complicit with systems of oppression.

Here at Mochi, our mission has always been to amplify voices and stories that aren’t heard elsewhere. To that end, we affirm that Black lives matter, and we pledge to initiate conversations and actions regarding race within our own lives and our Asian American communities. Our new column Black Allyship @ Mochi will feature anti-racism resources and action tips geared toward the many different perspectives found among Asian Americans. You may not agree with or totally understand everything we publish about race and racism. That’s okay. We still invite you to the conversation because we can always learn from each other.