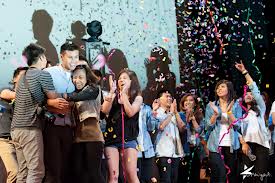 It’s that time of year again when the American Idol of Asian American and Pacific Islander singing competitions comes to town. Kollaboration New York will host its eighth annual talent competition show at New York University’s Skirball Theater on Saturday, September 28.
Over the past few years, their mission of “empowerment through entertainment” has taken off, expanding to twelve other talent competition shows in cities across the U.S. and Canada. Kollaboration has worked with musicians like John Legend, executive producer of America’s Next Top Model Ken Mok, and John Cho of Harold and Kumar, among others. It has also headlined top Asian artists like Far East Movement, Korean singer BoA, and the dance crew Quest.

This year, Kollaboration has changed things up and announced its top 10 finalists in advance of the show in September. You can read their bios here. From rappers and pop divas to folk-singing duos and R&B soloists, each finalist has a unique story and voice.

If you live in the New York City area, Kollaboration will be hosting a guest bartending event this Friday, June 21 at Butterfield 8 to help raise funds for their show. You can RSVP on Facebook.