Home EntertainmentJeremy Lin is Quite the Baller #Linsanity

Jeremy Lin is Quite the Baller #Linsanity 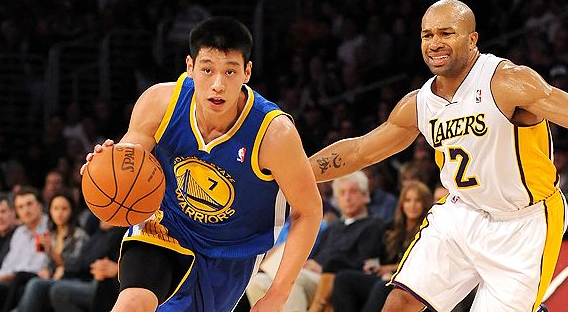 If you’ve been reading the news at all lately (or your Facebook newsfeed), this name would have cropped up for you: JEREMY LIN. Woo boy. Remember him? We featured him in our Youth Issue as one of our “25 Under 25,” and now look at him!

Jeremy’s Asian American, a Harvard grad and taking the basketball world by storm. This past Saturday, he powered the Knicks through to a win against the Nets by scoring 25 points (with seven assists). That’s a HUGE number. Monday night—it gets even better—he scored 28 points, helping the Knicks beat the Utah Jazz. And who said Asians were only violin players? Playa please. The Twitter hashtag being used to describe the rise of this Asian superstar is #Linsanity. Punny, right?

What’s most amazing is that, a couple of weeks ago, Jeremy was just another baller. He wasn’t even playing point-guard rotation. Nobody knew (well, except us). And then BAM. Surprise attack! Saturday, he sets the scoring record for a Harvard player, and Monday, he was the first player in over 30 years to get 28 points and 8 assists for an N.B.A. start. Dat’s cray. Lin is the first player in the N.B.A. ever to be American-born and of Taiwanese or Chinese descent, and he is just the fourth Asian American. He’s making Asian Americans everywhere proud, us included. According to the NYTimes article about Jeremy, one excited fan provided a timeline of Asians making their mark in sports. It goes: Bruce Lee, Jackie Chan, Yao Ming, Jeremy Lin.

Check out this rap about Jeremy’s newfound fame, and be sure to tune in for the rest of the season—because Jeremy Lin certainly ’tis the reason for the season.

0 Replies to “Jeremy Lin is Quite the Baller #Linsanity”