Home EntertainmentJacob Batalon’s “Reginald The Vampire” is Fat, Funny, and Full of Heart

Jacob Batalon’s “Reginald The Vampire” is Fat, Funny, and Full of Heart 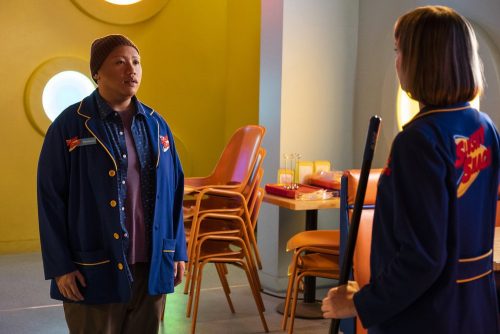 Reginald is — let’s just say — a little different than other vampires. He’s fat, a bit asthmatic, and a self-talker. Yet what makes SyFy’s new original comedy series “Reginald the Vampire” much like other undead plots is that it is about love.

When the audience first meets Reginald Andres, played by Filipino American Jacob Batalon, he is just a typical guy slinging slushies in a fast food joint, bullied for his weight, and deeply in love with his co-worker Sarah (portrayed by Em Haine). After a series of unfortunate events involving a vampire named Maurice (portrayed by Mandela Van Peebles), Reginald becomes caught up in a larger plot due to vampire politics already playing out in Akron, Ohio.

You Can Say the Word ‘Fat’

Batalon is best known for his breakout role as Peter Parker’s best friend Ned Leeds in the “Spider-Man” films (the Tom Holland movies). As Reginald, Batalon brings the same self-deprecating humor and Pinoy charm he is known for, but more than that, in this adult SyFy series, he addresses the criticism of fatness head-on.

“Not a lot of people know how to approach things like that because people can be quite sensitive,” Batalon shares. “Loving yourself and self-love is not just accepting where you are in your body and in your life, but it’s also making healthier choices for yourself. So when fat shaming comes into play, it’s very important to understand that your worth is not based on how you look, and your weight has nothing to do with what you have to offer to the world.”

In the very first scene, Reginald turns the taunts against his supervisor and Slushy Shack manager, stating that there is nothing new Todd can say about his fatness: Reginald has simply heard it all. When discussing his dating life with Maurice, Reginald admits he has never been on a date because “size matters.”

“I know what it’s like to be very obese and also to be very overweight. And I think that you don’t have to look like Hollywood movie stars to be healthy,” Batalon shares candidly. “Society and pop culture and Hollywood put all these very unrealistic body goals in the minds and faces of young people and I think that’s very unhealthy. What’s healthy is understanding that you don’t have to look like that to be healthy. That’s all.”

Don’t get me wrong, Batalon’s delivery of Reginald fighting fatphobia is not one that gushes with self-confidence, but is one that simply acknowledges the fact that fatphobia is rampant and that part of the problem is that fatness is stigmatized. What is enlightening for the series is that, throughout the first five episodes, Reginald’s love for food is shown on camera in ways that are both healthy and unhealthy; at one point he is shown binging, whereas in other scenes, he is simply shown enjoying a bowl of ice cream.

The Reginald we meet at the beginning of the series is caught lamenting to himself that somehow he got shortchanged in life — this is not only about his weight but also just the hand he was dealt that landed him in the Slushy Shack, his difficulty with relationships, and his desire for friends.

While self-love may be hard to find for Reginald, this social commentary on fatness is done tastefully and is not always the butt of the joke. Beyond being fat, Reginald desires a connection with Sarah and stumbles through the motions that any lovelorn person would. Although they already have chemistry, he wonders if he is good enough for her.

“There is a love story. But I think that more than just being [about love], there is this question of self-love in the show,” said Em Haine who plays Reginald’s romantic interest. “I don’t have the answers about love but I think that you can’t have love without some type of self-acceptance. We touch on all types of love: friendship-love, self-love, romantic-love.”

In addition to a Filipino lead, “Reginald the Vampire” has more queer and gender representation than your usual vampire series. Hanna plays the non-binary Ashley, Ned’s conspiracy and urban legend-loving co-worker, and same-sex couplings are natural and normalized — for vampires and humans.

Give Us More Jacob

While Reginald is the highlight of the series, the subplot threatening to take over the plot is that of Maurice’s revenge — a darker and more dramatic side to the story. While Reginald’s problems are more situational and comedic (“Will he or won’t he get eaten?” or “Will he or won’t he get the girl?”), “Reginald The Vampire” struggles to develop Reginald’s character due to the accidental, rather than purposeful, nature of his being a vampire.

Instead, the series relies on the crutch of tried and true vampire shows: desire, vengeance, and lust. In Maurice’s plotline, there is plenty of bloody sex and a thirst for revenge, but ultimately, the emphasis on revenge shifts the focus away from Reginald, leaving much to be desired. One episode gives Batalon only five minutes of screen time despite him being the titular character. A travesty because we are here for Reginald’s character development, a character arc built brilliantly on Batalon’s witty and comedic acting.

Ultimately, I hope the two plotlines will become more intertwined and allow Reginald to shine as the unlikely hero he is, while diving deeper into the complexities of loving oneself and others. Nevertheless, seeing Batalon take up space as the fat and fun-loving Reginald is a joy.