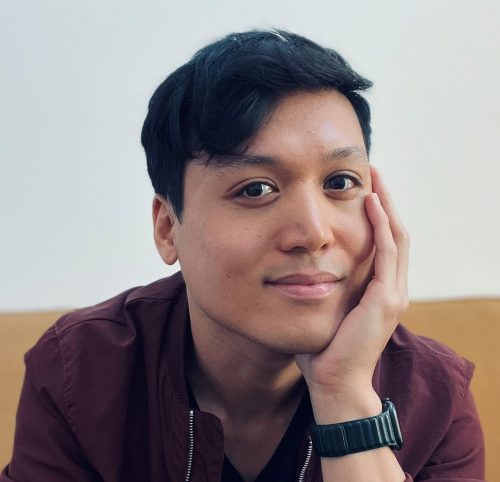 Unlike the stereotypical Pinoy who loves the spotlight, Emman Sadorra never loved being in front of the camera. In our interview, he laughs when I ask him why and notes that he was already “very self-conscious” in the Zoom setting we were in. “It’s true! I grew up in a culture that really does love to sing and perform and act. I love watching and being around that stuff. But I’ve always found myself more comfortable behind the scenes in a creative role,” Sadorra shares.

Sadorra is a queer, second-generation Filipino American writer drawn to telling stories about the complexities of identity and finding humor in unexpected places. Having worked in television development on shows like NBC comedies “I Feel Bad” and “Kenan,” as well as ABC’s “Black-ish,” Sadorra knows what it’s like to be very hands-on, managing everything from meetings and phones to the production calendar. As a showrunner’s assistant, he works with production from the writers’ room all the way to filming on set and even post production.

He credits this firsthand experience, explaining, “You get to see how TV gets made — how the TV sausage gets made. And it’s a lot of stuff that you don’t realize unless you actually are working on a show. [For instance] having a specific jacket to be used in a scene, it has to go through so many different meetings and levels of approval. It is a lot of unglamorous stuff. That can be very boring to some people, but I had a great time.”

Sadorra feels most at home in the writers’ room. “Being in the writers’ room is really special because it’s such a sacred space. It’s a very safe space because you’re here with however many other writers, usually 10 to 12, and you all have to be so emotionally naked and vulnerable every day,” Sadorra reveals. “You have to share really personal stuff about your life in order to get ideas for episodes or jokes. Everyone is always trying to write from a very authentic place and write about things that are real or that have happened to them. You bond with these people. It’s kind of like being in the war trenches together.”

There is a lot of trial and error. For any one joke that makes it into the script, there are three to four alternatives. But he also notes that sometimes the jokes that leave the room might not actually work when the actor delivers the line. Oftentimes, there are writers on standby ready to scramble and build jokes on the spot.

For race-conscious shows like “Kenan” and “Black-ish,” Sadorra emphasizes the intentional diversity in the writers’ room environment that needs to be created by showrunners. He shares, “The beauty of having a diverse room is that you get to see other perspectives and incorporate that into the story. My life experience is different from the person sitting to my left and the person to my right.” Showrunners need to make sure that writers can speak authentically to the characters and the themes of the show. For “Black-ish,” it was about identity, specifically that of being a Black man and father as well as being part of a Black family.

Sadorra’s cultural background came in handy when he wrote for the revival of Nickelodeon’s iconic show “Blue’s Clues & You!” For those who don’t have 3-year-old toddlers, the leading man on the show these days is Josh Dela Cruz, a Filipino multi-hyphenate actor. Like his predecessors Steve and Joe, Josh sings, dances, and skidoos with Blue and all her pals but he also makes bibingka and goes karaoking with his lola.

“I grew up watching the original ‘Blue’s Clues’ with Steve, as I’m sure maybe you did. I didn’t see myself in that show, even though I still loved it,” Sadorra says. “Picturing kids today watching that show and being able to learn what halo-halo is or find out what masarap means is such a cool way to incorporate a lot of beautiful things about my culture into a show that has such a wide reach.”

But just because it is a kids’ show does not mean it is easy to write. For one, kids’ attention spans are a lot shorter, and there is a specific curriculum that the shows follow to build skills like learning about consent or how to wash their hands. It’s a fun challenge, Sadorra notes, particularly when children are the most honest critics. “It is so funny to see how kids react to things. They’re so honest, and I really appreciate how they’ll tell you exactly what they think — If they like it, if they don’t like it, if they’re bored.”

What’s next for Sadorra? He is currently writing the adult animated comedy “In The Know” for Peacock produced by Mike Judge and Greg Daniels. As if that weren’t enough, as part of the NBC TV Writers Program cohort, Sadorra is writing a workplace comedy set within the wedding planning industry. This idea comes from personal experience, as Sadorra was once a wedding videographer.

“I don’t know if you’ve ever worked at a wedding, but it’s kind of chaotic and insane and wonderful and beautiful and romantic too. I almost always cried when the parents danced with their kids,” Sadorra also acknowledges. “As the videographer, I had to watch it over and over again when I was editing the footage. I was a mess.”

Sadorra is one of two comedy writers in the program and one of the total eight selected from over 2,000 applicants.