You already know sports phenomenon Jeremy Lin, but let us introduce you to Ed Wang. Last year, this 6’5” football player made history by becoming the first player of full Chinese descent to be drafted into the NFL. Though Wang recently parted ways with the Buffalo Bills mid-season shortly after an injury, he didn’t put his life on pause.

Following some rest time at home in Virginia, Wang traveled to China on a ten-day trip where he proposed to his girlfriend. Mochi caught up with him over the phone to discuss the motherland, his upcoming nuptials, Linsanity, and more.

Mochi: Tell us about your trip to China.

EW: We went to my mom’s hometown, Dalian, for three days to hang out with her half of the family. I’d met them before, but it’s been about ten years. It’s been a while, so it was nice to get everybody together again. 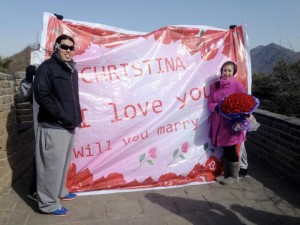 On the fourth day we went back to Beijing, and that’s where I met up with all my friends from the States that came with me. There were seven of them who came along, my fiancée as well and my brother. We did a lot of sightseeing—then I proposed on the Great Wall!

I was nervous, but it was cool because my friends and family were there. We made a big sign saying: “I love you, Christina. Will you marry me?” that my friends held up on a slope area. We had professional photographers take pictures of us underneath the banner—without her seeing what was behind her. When the photographers asked her to review the photo, she saw the sign in the background and turned around—and I was on my knee and I proposed.

Mochi: Aw, that’s so sweet. Did she say yes immediately?

EW: Yes, she did. Her brother came and it was actually his birthday. My uncle’s birthday was also that day, so we celebrated that and our engagement with 80 or 90 people later on at night.

Mochi: Do you have a date set?

EW: We’re thinking about next year. I think the plan right now is to have two weddings: one in the States and one in Beijing, so we can get everybody in.

Mochi: What are the must-see sights in Beijing?

EW: The Great Wall, of course. Tiananmen Square, the Forbidden City and the park right across it, Jingshan Park. I’d definitely suggest eating at the Pangu, a seven-star hotel on top of Bird’s Nest. The restaurant has a really good spread, plus a really beautiful view of the Olympic Park at night.

Mochi: Let’s talk about the injury that cut your first season short. What happened there?

EW: I pinched three of my nerves in my neck, which caused a lot of weakness in my right arm and limited the movement in my neck so I wasn’t able to play. It happened during practice, when I was doing some hitting drills and hit the wrong way.

Mochi: Have you been enjoying your time off or is it frustrating?

EW: Both. It is nice to be able to enjoy time with my family and friends, which I haven’t been able to do for a while because of football. I’m definitely itching to get back on the field though. I’ve never not played for this long. It’s weird. It’s a definite adjustment.

Mochi: As a professional athlete, is the idea of an injury putting you out of the game forever always at the back of your mind?

EW: I’ve had serious injuries before: I broke my ankle, tore a ligament, stuff like that. I had to sort that out, but you try not to think about it too much.

Mochi: You’re back on the waiver wire now. Are you feeling anxious about what’s going to happen next season?

EW: No, because I feel like I just need to keep working, and when my opportunity comes, I want to be prepared for it.  Everything happens for a reason.

Mochi: What are your thoughts on Jeremy Lin? His breakout season also got cut short because of an injury.

EW: I’m really happy for him, just seeing him out there and doing well. I heard about him about two years ago when he was still at Golden State. It’s really nice to see all his hard work pay off and that he finally made it.

About his injury—it sucks. As an athlete, there is always that chance that you could get hurt. It’s really unfortunate that it happened at this time, but he’s a good player so I’m sure he’ll bounce back from it.

EW: No, but I know his roommate from Harvard. He played football for Harvard and he’s also Chinese. Now he works for NFL China, so he was at our engagement party in Beijing.

Mochi: What other up-and-coming Asian American athletes should we be watching?

EW: Honestly, I would say my younger brother David, who plays for Virginia Tech. Keep an eye out for him!

As of press time, we had just heard that Ed has signed with the Oakland Raiders. He’ll continue to be an offensive tackle. Congrats, Ed!

Interview has been edited for clarity.