Home EntertainmentFresh Off the Boat Recap: The Show Hits Home With Laughs and Moving Moments

Fresh Off the Boat Recap: The Show Hits Home With Laughs and Moving Moments 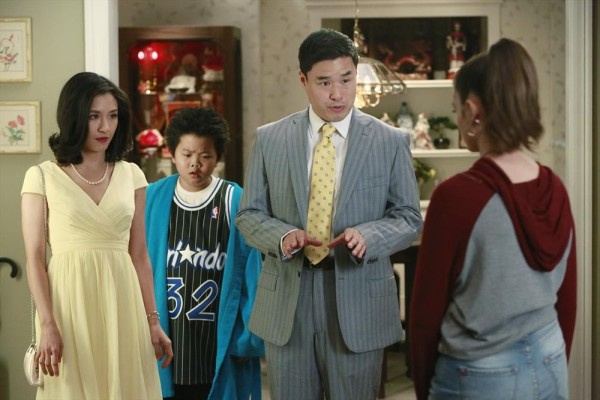 There’s a surprisingly touching moment, too, when Louis Huang (Randall Park) sits his son down and actually teaches him about the ins and outs of sex (“man-to-man”). Maybe this is a difference between the experiences of the Asian American girl and the Asian American boy, but I never got the sex talk from my parents—and I’m hearing a lot of incredulity from friends. But if this is true to Eddie’s experience, then it’s a refreshing take, and a pleasant surprise to audiences who may have expecting silence and denial of the child’s sexuality.

Eddie wants to buy a new video game and must learn to earn, but with an Asian American twist: Louis regales him with the story of his grandfather, the ye-ye, who worked his butt off starting from a young age and served as an inspiration to the next generation. What’s thoroughly enjoyable about this episode, however, is that despite the immigrant-story undertones, Eddie’s current struggle is the universal “work for what you want” story, found in every family sitcom.

Then there’s Constance Wu, whose comedy is pure gold in this episode as her character finally goes job hunting. “No one seems to appreciate how I’m good at everything,” she says. Her entire search is comically hindered by her belief that she knows better than everyone else around her, including a furniture store manager who’s not even hiring (“you obviously need my help! Don’t worry, you found me. Jessica is here”). Finally, that very belief leads her to the perfect profession: real estate.

Jessica’s attitude towards the gay couple who turn out to be her first house sale is the most interesting part of the episode. When she assumes they’re best friends, the two men correct her and tell her that they’re lovers—and she ignores them. The moment is played off as comedy, but the fact that she stays in loud and vocal denial (blocking, actually, any further attempts to correct her mistake) is a clear nod to the problematic treatment of the LGBTQ+ experience of the 1990s, as well as the strained attitude of Asians towards that community in general.

Surprisingly, Fresh Off the Boat takes a running gag—the fact that Louis’s restaurant, Cattleman’s Ranch, greatly resembles the more well-known Golden Saddle franchise—and develops it into a plot. It turns out that Louis stole the restaurant idea, and when he builds a new billboard at the edge of town, the Golden Saddle owner realizes it. Meanwhile, Eddie deals with his crush on his next door neighbor and tackles a classic ‘90s middle school challenge: the school bus.

This episode falls a little flat when it comes to laughs, but does an excellent job of adding new dimensions to the relationship between Louis and Jessica. They have very different perspectives, but the love and support they give each other is touching to see—particularly in an Asian American context, where it isn’t rare to find couples who may feel affection for each other but don’t express it (and certainly not in front of their children). “I’d take a good businessman over a visionary any day,” Jessica says when the truth comes out about Cattleman’s Ranch, and that is about as much of a declaration of love as you’re likely to hear from Mom to Dad.