Home EntertainmentFresh Off the Boat Episode 8 Recap: Not All Asians Are The Same

Fresh Off the Boat Episode 8 Recap: Not All Asians Are The Same 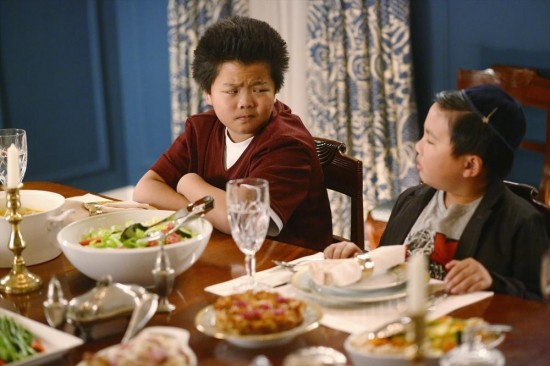 Fresh Off the Boat brings the issue of race back front and center with the introduction of a new character, Phillip Goldstein (Albert Tsai)—a Chinese child adopted by a Jewish couple. Though his parents aren’t Asian, Phillip is every Chinese parent’s dream: he studies obsessively, loves classical music, and plays the cello. It’s hard for Jessica Huang (Constance Wu) to not compare him with Eddie (Hudson Yang), who obsesses over rap music and black culture. In fact, she doesn’t even try, pushing for them to become friends and gushing about him whenever Eddie can hear. This episode, like the others, has a number of humorous moments, including the rapid back-and-forth between Phillip and Jessica when she first finds out he plays the cello: (“Orchestra?” “First chair.” “Practice?” “Daily.” “How long?” “Five times perfect. If I get it wrong the fifth time, I start over.”) The most touching moment of this episode, however, is not when Jessica finally realizes her newfound child hero is a jerk (spoiler: he ditches Eddie in the middle of a theater), but when the show proves that two people are of the same race don’t necessarily have to like each other. Phillip and Eddie are both Chinese, and their outward similarities are all anyone, including the school administration and Eddie’s mother, can see. (It’s interesting that Phillip’s parents are actually Jewish, but that’s a discussion for another time.) But they have absolutely nothing in common. In the end, Eddie bonds with the other recurring minority character in the show—a black student—over their mutual love for rap music.

The “outsiders gotta stick together” conclusion is rather ambiguous, and some parts of the episode certainly feel rushed. Overall, however, this episode does a solid job of speaking to two aspects of the Asian American experience: the pressure of constant comparison to other kids, and the uncertain role of the model minority.