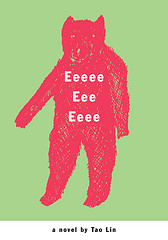 At 25-years-old, Brooklyn-based poet Tao Lin toes the fine line between the sublime and the just plain ridiculous.

From his book titles [“eeeee eee eeee” – the sound dolphins make] to his books’ contents [one of the poems: “some of my happiest moments in life occur on AOL instant messenger”], Lin’s quirky and oft bizarre works invoke a deadpan, absurdist aesthetic. Inspired by “boredom and loneliness,” his poems are akin to empty thoughts on crack. Yet their sheer audacity is pretty hilarious.

This Taiwanese American is no stranger to online stunts either, posting on Craigslist for an “army of interns” and shamelessly promoting his endeavors through blogging and insistent e-mails. Some of his tactics have even garnered him the stink eye from other bloggers and web sites.

Love him, annoyed by him, or just plain dumbfounded by him, the merit of Lin’s work is in the eye of the reader.

His forthcoming book, entitled “Shoplifting from American Apparel,” is set to come out this fall. Mochi recently interviewed Tao Lin via e-mail.

Do you approach your writing with a philosophy or mantra? If so, what is it?

Maybe “write what I want to read.”

Tell me about your journey to becoming a writer.

I played a text-based online role-playing game called “Gemstone III” in middle school. I think that maybe increased my awareness of sentences and adjectives and things to a certain extent. Later on, I read the book version of “Fight Club” [and] then read Kurt Vonnegut after seeing his name on Chuck Palahniuk’s unofficial website. I also saw Amy Hempel’s name on the website and read everything by her … and then at some point I read “White Noise” by Don Delillo, thought it was funny and wanted to write a novel like that.

What does your name mean?

I think it means “the way.”

What is this “army of interns” you speak of and how does one join?

I advertised for interns on Craigslist once for me and like four other people. The interns would be all of our interns. Something like 200 to 300 people responded, many of them NYU or Columbia students. Later on, I advertised for interns on my blog and people became my interns. To join you just make a blog saying you are my intern. I don’t know who is or is not currently my intern; I don’t communicate with my interns about intern things. 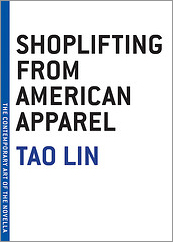 Tell me about your novella, “Shoplifting from American Apparel.” How did the incident that inspired it go down?

I went in American Apparel to shoplift a shirt to wear to a reading I had that night. I remember thinking that the reading was in an art gallery or something and that the shirt I was currently wearing was making me feel bad, which motivated me to want a new shirt. An undercover policeman (or security person) stopped me on the sidewalk outside. [Ed’s note: In case you were wondering, Mochi doesn’t endorse shoplifting, even though it can make for a fascinating book subject.]

What are you working on now?

I’m responding to e-mails mostly. I have completed my next two books. I made some graphs and posted them on my blog. I am also focused on doing things related to Muumuu House, a press I started. Its first book will come out in March, a poetry book by Ellen Kennedy.

Does your heritage influence your work?

What are your books driven by?

I feel my books are driven by me writing what I want to read, which changes often, but could be described as funny, detached, existential literature written mostly in concrete language (unless in the style of Lorrie Moore) about people being depressed or lonely or bored or hanging out.

Is there something that repeatedly inspires you?

How did the G-mail chat poetry come about?