When Aziatix first talked to Mochi earlier this year for our Underdog Issue, we chatted about high school, cultural borders, and their take on the entertainment industry. A few months later, we got the chance to meet them in person on their second U.S. tour. The three members of Aziatix—Nicky Lee, Flowsik, and Eddie Shin—impressed me with their down-to-earth personalities and relaxed mentality, considering they flew into Los Angeles less than a week before and had already performed in four other cities prior to the Cambridge stop in February. Nicky admits, “Every time we’re on the road, coming from Seoul or elsewhere in Asia, we’re always working on jetlag, at least for the first 3 to 4 days. It’s always great seeing all the fans in different cities and being able to travel. That’s the awesome part.”
Bands on tour usually do special pre-show rituals, but for Aziatix, keeping it simple is best. “For every performance, we don’t skip a prayer,” says Nicky.

“And we definitely eat,” says Flowsik. Nicky laughs and explains that “Every time we get out to the States, we always gain about 10 pounds!”

If they did, their fans didn’t notice. Devoted fans lined up for more than an hour before the doors opened, huddling against the wall in the snow in hopes of getting close to Aziatix later on stage.  “We have really loyal fans,” Eddie says proudly. “Tonight for our show, we have fans from Japan flying out so that’s crazy.”

Nicky says, “We love our fans. There was one fan back in San Diego; a little 5-year-old girl singing every line and every word to our song. That’s what really touched our hearts and really makes everything worth it. Whether we’re singing jetlagged or real tired, when we think about fans like that, just supporting and loving us, it helps us get over all the hard times and makes us remember why we’re doing this music thing.”

To commemorate the one-year anniversary of their album Nocturnal and celebrate how far Aziatix has come, we’re giving away an exclusive autographed copy of the album. Follow the 2 simple steps below to be entered in the free giveaway:

2) Tell your friends about our free giveaway and tag us on your Facebook post or mention us on Twitter so we know who’s participating! One random lucky winner will be selected on Friday 8/17 and announced on Facebook and Twitter on Monday 8/20 so check back to see if you’ve won!*

*Winner will be contacted via Facebook and Twitter and must provide a U.S. mailing address within 2 weeks of the announcement to receive the autographed album. No other restrictions apply. 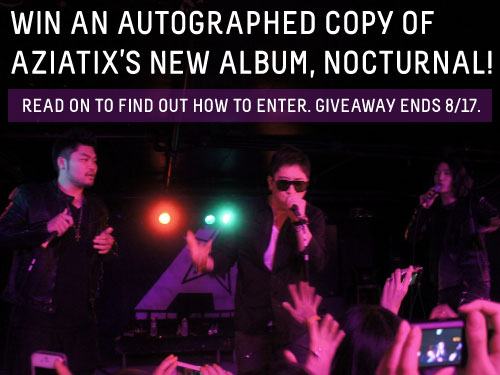 Asian rappers are hitting it big in the U.S., but where do they fit into the hip-hop world?