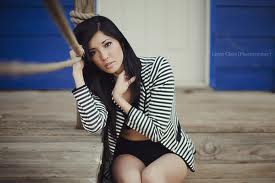 You need more than just unique striking looks, personality, versatility, edge, and that certain je ne sais quoi to stand out in the competitive world of modeling. For the past few years, models Liu Wen, Shu Pei, Hye Park, Ai Tominaga have paved the way for Asian models to rise to success in the fashion industry and become the most celebrated models in history. It was their “exotic” looks, androgynous features, perseverance, and modest personality that shined through in the runway. Model Trang Cao didn’t believe it was their exotic looks, but their hard work that got them to the top. Asian American model Trang Cao has always thought modeling was a personal responsibility.

“My inspiration for modeling has been and always will be the responsibility I have to be a role model. My love for others has really pushed me to become the person I am today. I know that I have a responsibility to lead the younger generation to become intelligent, independent, and strong women,” Cao says.

Cao got her start in modeling when she competed in pageants in college. The pageants helped her pay for tuition, but her hobby soon turned into a full-blown modeling career as photographers asked to shoot her for magazine spreads, editorials, and ads. But giving back to the community was always her goal. In 2008, Cao joined the Miss Vietnam USA pageant and placed in the top 5. The opportunity has helped her become more involved in the Oklahoma community, where she was brought up. Cao was born in a refugee camp in Malyasia after her parents fled Vietnam and her family is first generation. She grew up in government housing for most of her childhood and lived among neighbors who had also fled from other countries. A humble, modest life wasn’t new to her; the adversity has given her more meaning to her work and has made her appreciate the opportunities given to her.

“Growing up I never went without, I had all I needed when it came to love, food, and shelter. My parents worked 18-hour days and raised five kids. One might think we were struggling to even feed ourselves, but God blessed my parents with the gift of charity. If we ever had any extra food, it would be given to a neighbor that needed it. The selflessness of my parents has always given me the fuel and humbleness to help others who can’t help themselves. I’ve made the choice to dedicate my life to help others,” Cao says.

What’s up next for Cao? In addition to building her career in modeling (she’s modeled for fashion photographer Lenin Glass and been featured in Twenty Something magazine, Dillards, So6ix magazine, and Gils Clothing), she is looking to also write a book. She argues your looks can only achieve so much in modeling; it’s also your intellect that can take your farther.