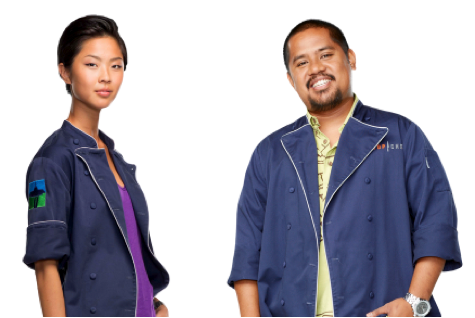 If you’re a fan of “Top Chef: Seattle,” you don’t need us to tell you that Restaurant Wars is ablaze tonight, with two Asian American chefs at the helm! Kristen Kish and Sheldon Simeon have each been rocking the culinary competition every week, and we’re excited to see what their restaurant concepts (Kristen’s contemporary French versus Sheldon’s modern Filipino fare) produce for the judges. All we know is, we want to try a bowl of their winning fare — Sheldon’s sour tamarind soup with pork belly and Kristen’s onsen egg with camembert-mustard sauce — ASAP. [Washington Post]
Because you don’t get enough Psy news around here, we thought we’d toss in another tidbit: Psy is set to star a Wonderful Pistachios ad that will debut during the Super Bowl. [Angry Asian Man]

“South Korea has the highest per capita rate of plastic surgery in the world; one in five women in Seoul have undergone some kind of procedure.” [Jezebel]

Also check out this feature on K-Pop stars and plastic surgery in the December issue of KoreAm. [KoreAm]

The 2013 winner of Miss America, former Miss New York Mallory Hagan, has fitness app Fitocracy to thank for her bikini bod. But did you know that Fitocracy was started up by two Asian American twenty-somethings and self-proclaimed “computer nerds,” Dick Talens and Brian Wang? [BetaBeat]