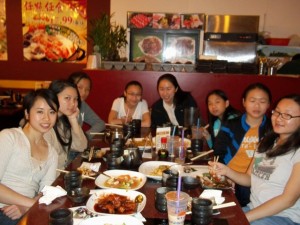 “Boys are insensitive!” Elisabeth Y., 15, declares. I met with a group of girls from Chinese American Student Exposure (CASE) to discuss the college admissions process, but the conversation started off slowly, with only one of the girls, Lu Z., a 17-year-old senior, having a plan: To go to college close to home and become a veterinarian.
I was joined in the advice-giving by Susan Z., 20, and Jenny C., 20, both current college students, who agreed that “your major doesn’t really matter; just study what you’re interested in and have a good time.” Linda L., 13, and Andrea L., 11, chimed in and announced that they were “too young to think about college. We just want to enjoy life and be carefree!”

The discussion quickly livened up as we delved into other topics that the girls really wanted to discuss, such as the aforementioned boys, cliques, racism, family dynamics and even test scores. The joke with test scores was that bringing home a 98% would elicit, rather than praise, the following reaction from parents: “Where is the other 2%?” We all laugh at this one, with Howard Chin, the founder of CASE, grinning as well.

Chin founded the organization in 2003 as a way to give back to the Chinatown community that kept him off the streets. He spotted youths hanging around the streets and wanted to start something that offered both recreation and team-building. He settled on basketball, and the program has since grown to include a boys’ and girls’ team. However, the overall program size is intentionally kept small so participants receive individualized attention from volunteers.

While basketball matches are ostensibly the reason to gather every weekend, the program empowers participants and teaches them critical social skills. The girls, many of whom are from single parent households or latchkey homes, develop deep and lasting friendships with each other. Chin believes that the program provides a vital way for adults to give back as well. “Many American parents are school sports coaches, or involved in the PTA, but Asian parents don’t typically do that,” he says.

The discussion eventually broke down into smaller pairs with the girls chatting about the latest reality TV stars, new video game releases and why one of them doesn’t eat chicken. I envy them—not yet worrying about college, jobs, relationships or life—just intent on enjoying the moment.

Maggie Hsu is a co-founder of Mochi magazine and would gladly relive her college years over again.