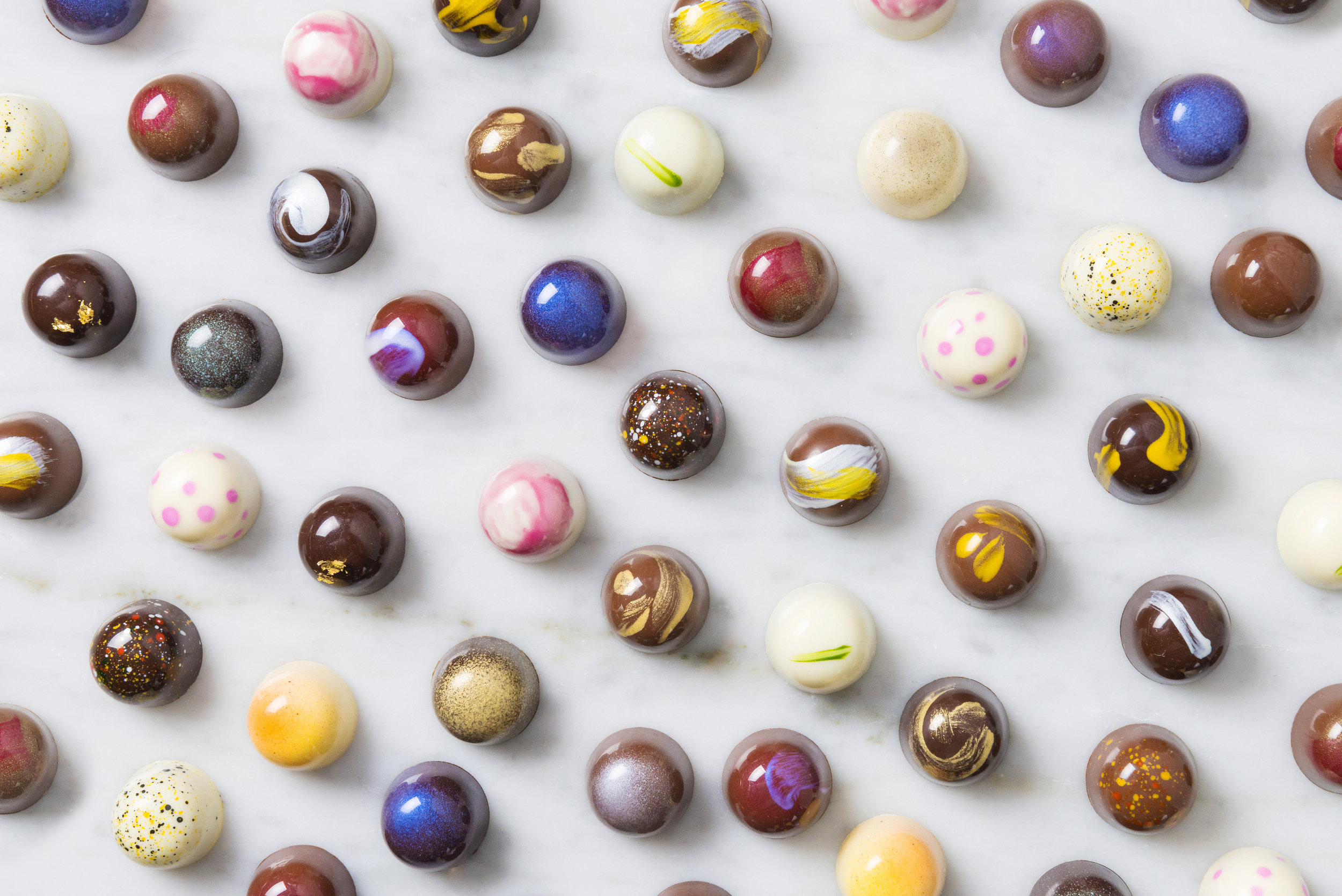 Tucked into a tiny shop in New York’s Nolita neighborhood, rows of chocolate bonbons sparkle with flecks of 23-carat gold leaf, hand-painted to resemble the galaxy. The star attraction at Stick With Me Sweets, they look almost too perfect to eat. But bite into the miniature globes and you’ll see that the ganache, caramel, and other sweet fillings are out of this world—no pun intended. The brains behind these sweets, chocolatier Susanna Yoon, has made it her mission to make luxury chocolates accessible for everyone. 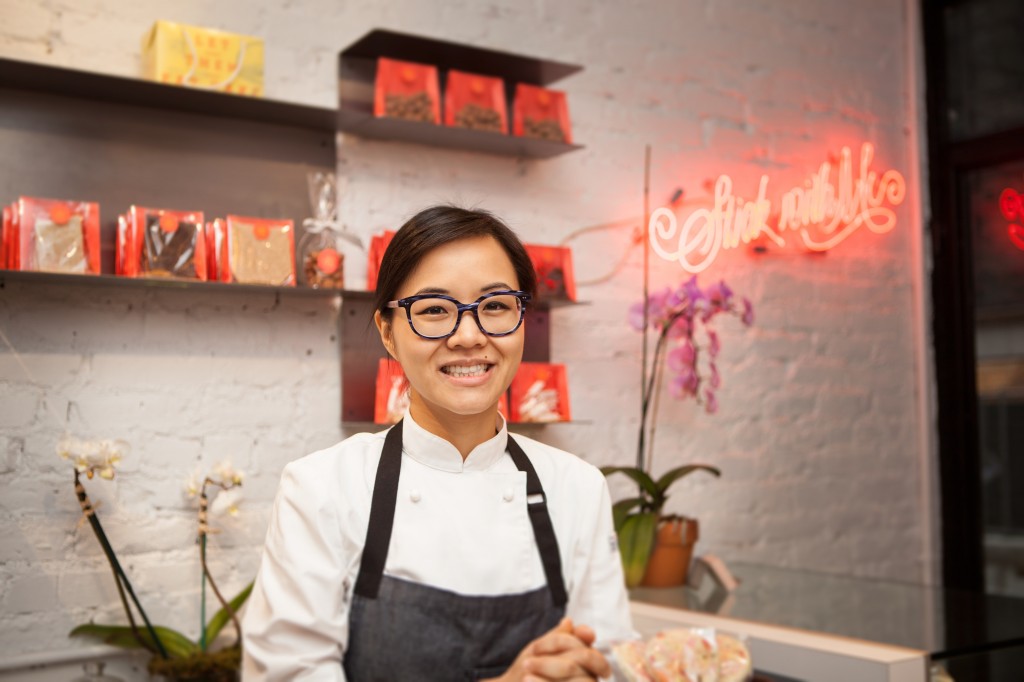 Trained at the French Culinary Institute (now the International Culinary Center) and an alumna of the acclaimed restaurants Park Avenue and Michelin-starred Per Se, Yoon left a successful marketing career after five years in her mid-20s to try something new. “If you had asked me, I would have had no idea I would be making chocolates. It was the hardest in the beginning,” she says. “Going from a corporate structure to suddenly working in a kitchen and being yelled at and wondering, ‘Why are you yelling at me?’—that sort of thing. But it was something you had to do.”

Working at these renowned restaurants gave Yoon the discipline and skill to pursue her own business: opening Stick With Me Sweets in January. “Because opening a chocolate shop requires a lot of funding, initially we started small with caramels, and the name ‘Stick With Me’ reflects the texture of our first product.” These days, you’ll find 12 caramel flavors at the shop, from brown butter macadamia nut and coffee to raspberry and blackcurrant.

Beyond the caramels, the store’s permanent collection features 24 varieties of the now highly popular chocolate truffle bonbons—plus a rotating 25th flavor. And they’re all more complicated than you might think. “There can be over a hundred different ganaches that we are actually making, because some are layered and some have extra components to them,” Yoon says. “There’s just so much going on that you can’t see with the naked eye.” 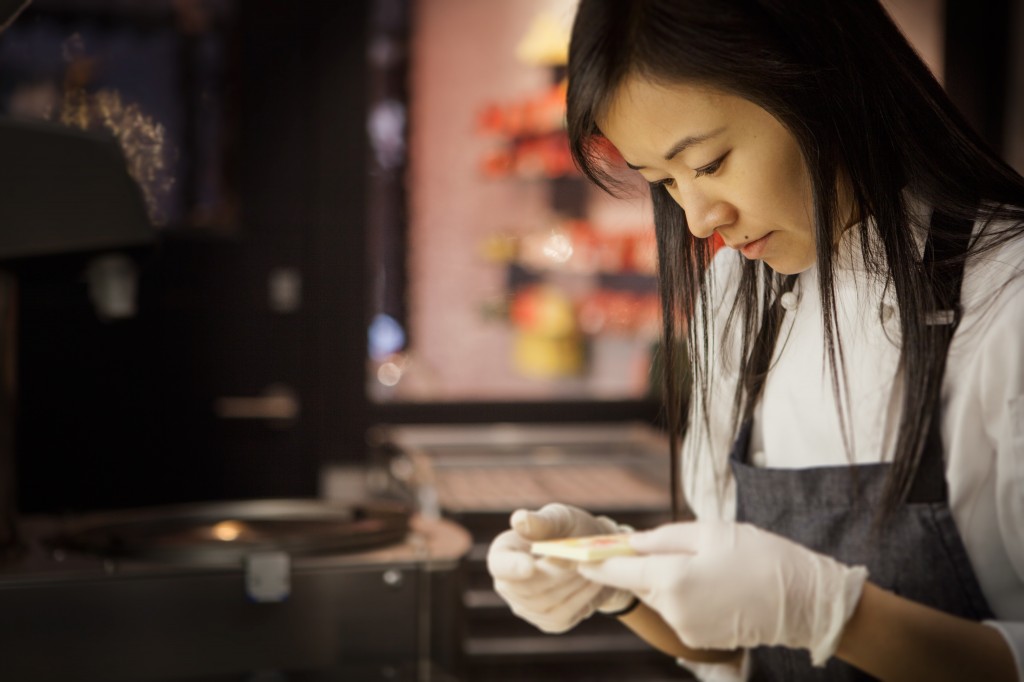 The bonbons are all handmade, highlighting an assortment of textures and ingredients such as 72 percent araguani dark chocolate from Venezuela, matcha from Japan, real vanilla beans, crunchy speculoos cookie crumbs, and pillowy homemade marshmallows. And if those creative flavors aren’t already impressive enough, consider this factoid from Yoon: “Sometimes it takes a month to develop a flavor and we’ll go, ‘This is perfect,’ and other times it’s a longer process.”

If you’re ever in the pint-sized shop, keep an eye out for other seasonal treats, too. These can take the form of chocolate-covered crispy rice cakes, toffees, cakes, and parfaits in all sorts of flavors.

For Yoon, chocolate-making is both calming and challenging. “Chocolate is very temperamental and it can affect your mood at the same time,” she says. “It doesn’t matter how long I’ve been doing it, I feel like every single time, it’s still a challenge because you’re always trying to make it better.”

More importantly, that goal to be constantly improving, influenced by her past experience at Per Se, is at the heart of what makes her business thrive. “It’s this incredible feeling of everyone focused on doing something—it pushes you to be faster, to be better. You see everyone focused and everyone’s moving fast, so you feed off each other’s energy and passion too,” Yoon explains. “Sometimes it’s like, ‘I didn’t even know I had this passion,’ but it ignites amongst each other, which I think is a pretty incredible feeling.”