Home UncategorizedKitsby to Bring Asian Flavors Into the Mainstream, One Dessert at a Time

Kitsby to Bring Asian Flavors Into the Mainstream, One Dessert at a Time 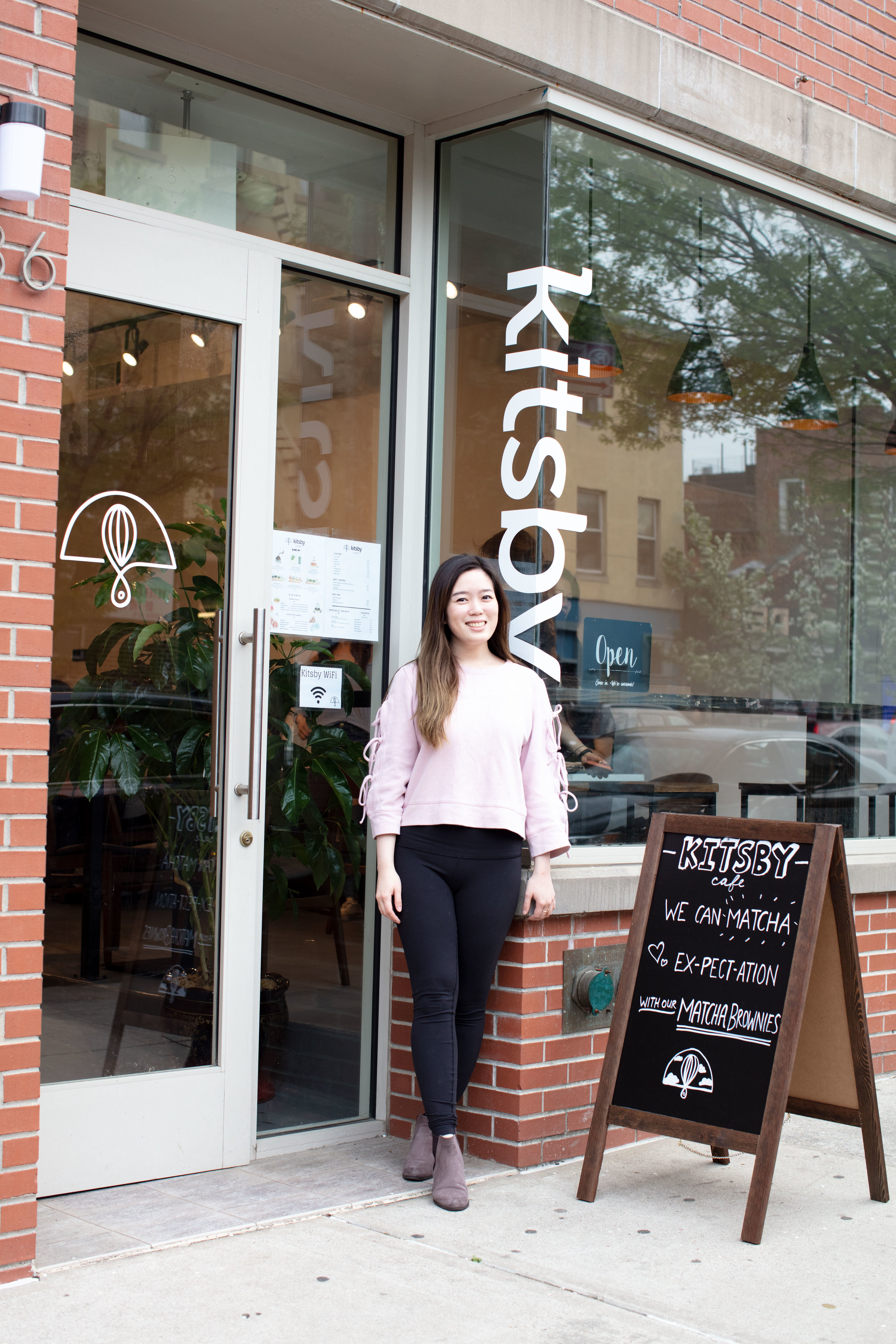 As soon as you slice open a lava cake at Kitsby, its liquid center oozes out—a warm contrast to the cold scoop of vanilla bean ice cream on the plate. But this cake is not your average chocolate variety; it features an ingredient you would find more commonly at your favorite dim-sum spot: salted duck egg yolk.

The dessert evokes the flavors of liu sha bao, that is Chinese custard buns, with its salted egg crème anglaise, yolk custard soil and steamed bun cubes. It is one of the newest additions at Kitsby, a dessert bar and café in Brooklyn, N.Y., the brick-and-mortar location of an e-commerce baking company helmed by Amy Hsiao, a Taiwanese-American entrepreneur with a love for all things sweet.

Hsiao, a New York City native, has no background in pastry, but she credits her restaurateur parents for instilling “hints of hospitality” in her. She kept her passion for home baking going despite relocating to Wellesley, Ma. to attend Babson College. It was not a cheap hobby, especially when living in a remote college town without a car. According to Hsiao, the ingredients available at local grocery stores and on Amazon were only available in large quantities, resulting in the cost of a whopping $40 to bake just one apple pie.

Seeing all of her ingredients going to waste, Hsiao felt that there had to be a more convenient and cost-efficient way for people to enjoy baking at home. This spurred her to create Simple Spoons, originally a team project for her college entrepreneurship course, in 2015. Simple Spoons formed the basis for what would later become Kitsby. While members of her team came and went over the years as other opportunities materialized, Hsiao stayed on to see her vision come to life.

It was two years later that Hsiao met Maverick Wong, who partnered with her as chief operations officer. Together, they found funding through angel investors and rebranded Simple Spoons as Kitsby with the aim of gaining a wider customer base.

“We decided to rebrand because our brand was really niche, very girly,” Hsiao said. “We wanted to make something more universal, more applicable to New Yorkers.” That change is reflected in the brand’s name: Kitsby, a melding of “kits by,” which communicates the company’s desire to offer baking kits that can be done by anyone.

Hsiao explained, “We wanted to make this a product that everyone can do. It’s essentially a baking kit with all different levels so anyone can do kits from Kitsby.” The company currently distributes four different lines of products for varying skill levels: frozen treats that are ready to pop into the oven, drink mixes (such as hot chocolates), easy baking mixes (which Hsiao calls “upgraded Betty Crocker [recipes] with a spin”), and kits for the more advanced baker. A kit, which can take up to two hours, includes separate ingredients, video instructions and a recipe pamphlet.

What makes Kitsby stand out from all the other baking kits out there? According to Hsiao, the uniquely curated flavors distinguish them from competitors. 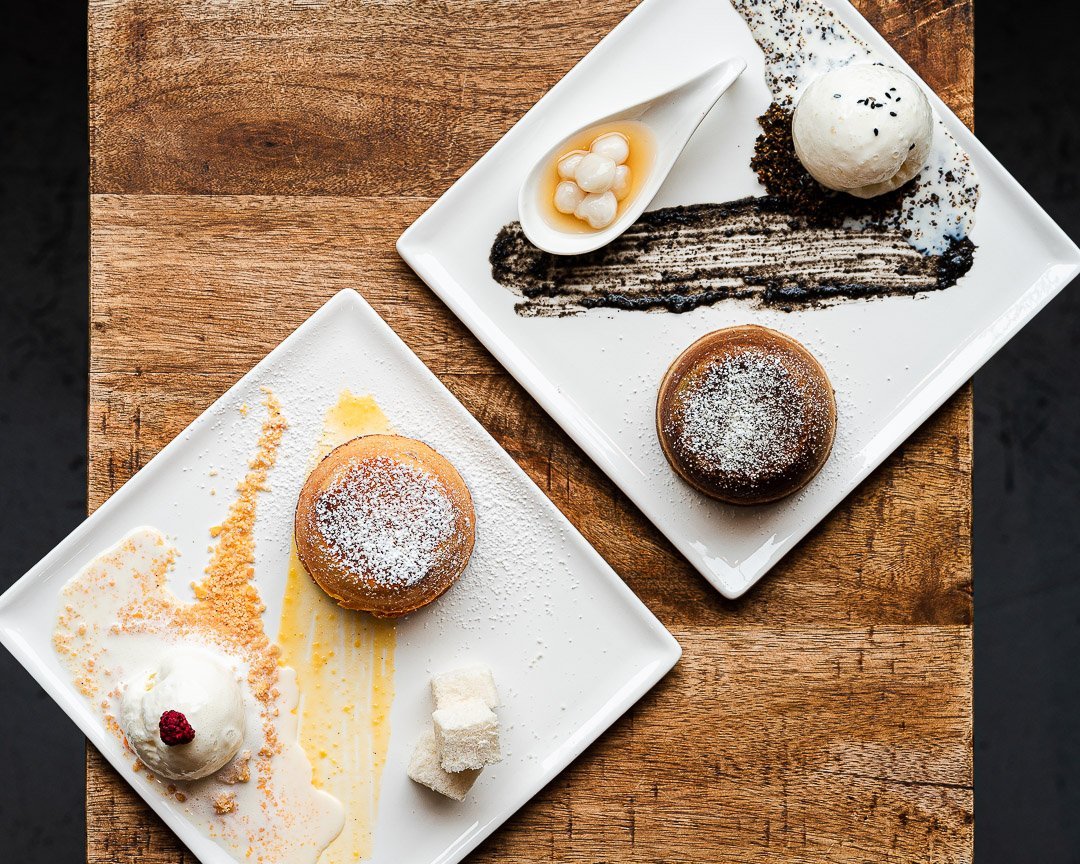 “Our main objective is to introduce new flavors to people who might not have access to them,” she said. Several baking components used for a Kitsby kit are not readily available in the United States. Hsiao’s company imports ingredients from various regions around the world, but particularly from Asia, such as a specific type of matcha sourced from Uji in the Kyoto prefecture of Japan and butterfly pea flowers from Thailand. Kitsby also provides a housemade Earl Grey tea powder as a baking kit ingredient.

With the success of the brand’s ready-to-bake kits, especially among millennial consumers on the West Coast and in the Midwest, Hsiao and her team now want a wider customer base to experience their flavors, even those who don’t bake. They eventually opened Kitsby’s dessert bar earlier this May in the neighborhood of Williamsburg in Brooklyn—an area known to embrace newcomers and artisanal menu items that are more experimental.

“Not everyone enjoys baking, but a lot more people enjoy eating,” Hsiao said. “You can come to our dessert bar and just have a great experience here, and learn about new flavors, such as salted duck egg, that you don’t see everywhere.” Besides the salted egg yolk lava cake, Kitsby also serves desserts such as cream puffs and vegan treats, coffee and tea beverages, and specialty drinks such as the Green Gypsy—a lychee jasmine green tea with fresh cucumber juice.

The customer response since Kitsby’s debut has been positive, and not just from those familiar with Asian flavors. As Hsiao gauges it, 70% of the people that visit Kitsby are actually not Asians, many of whom are locals with an open-minded Williamsburg spirit. But the dessert bar has definitely benefited from the support of the Asian American community. Fans have posted about their desserts on the popular Facebook group Subtle Asian Traits. One person even traveled two hours to try their fare.

Starting a business has definitely had its challenges for Hsiao. She initially struggled to get funding for Simple Spoons, before it became Kitsby, because angel investors and venture capitalists did not always relate to her brand and what she was trying to offer. With the launch of the brick-and-mortar location, she had to tackle hiring the right people and going through a trial-and-error process to run the business. No one on her team has prior experience in the food and beverage industry, but having a mission and communicating it clearly helps to seek out and retain those who share that mission, according to Hsiao.

For other Asian American women who are thinking of launching their own venture, Hsiao advises, “There is no right time to do it.” Moreover, you may have to be open to leaving behind certain commitments and take calculated risks if “it’s something that you really feel passionate about.”

Hsiao’s passion is opening Kitsby up to new possibilities. The founder hopes to open a warehouse space for the e-commerce side of the business somewhere along the West Coast next year, with a café location attached. She also plans on expanding the brand by going into retail and switching to recyclable paper packaging. Locally, Kitsby will participate in Urbanspace’s annual Union Square Holiday Market in Manhattan. Hsiao also plans on serving desserts that feature pandan and dango, as well as alcoholic beverages in the near future.