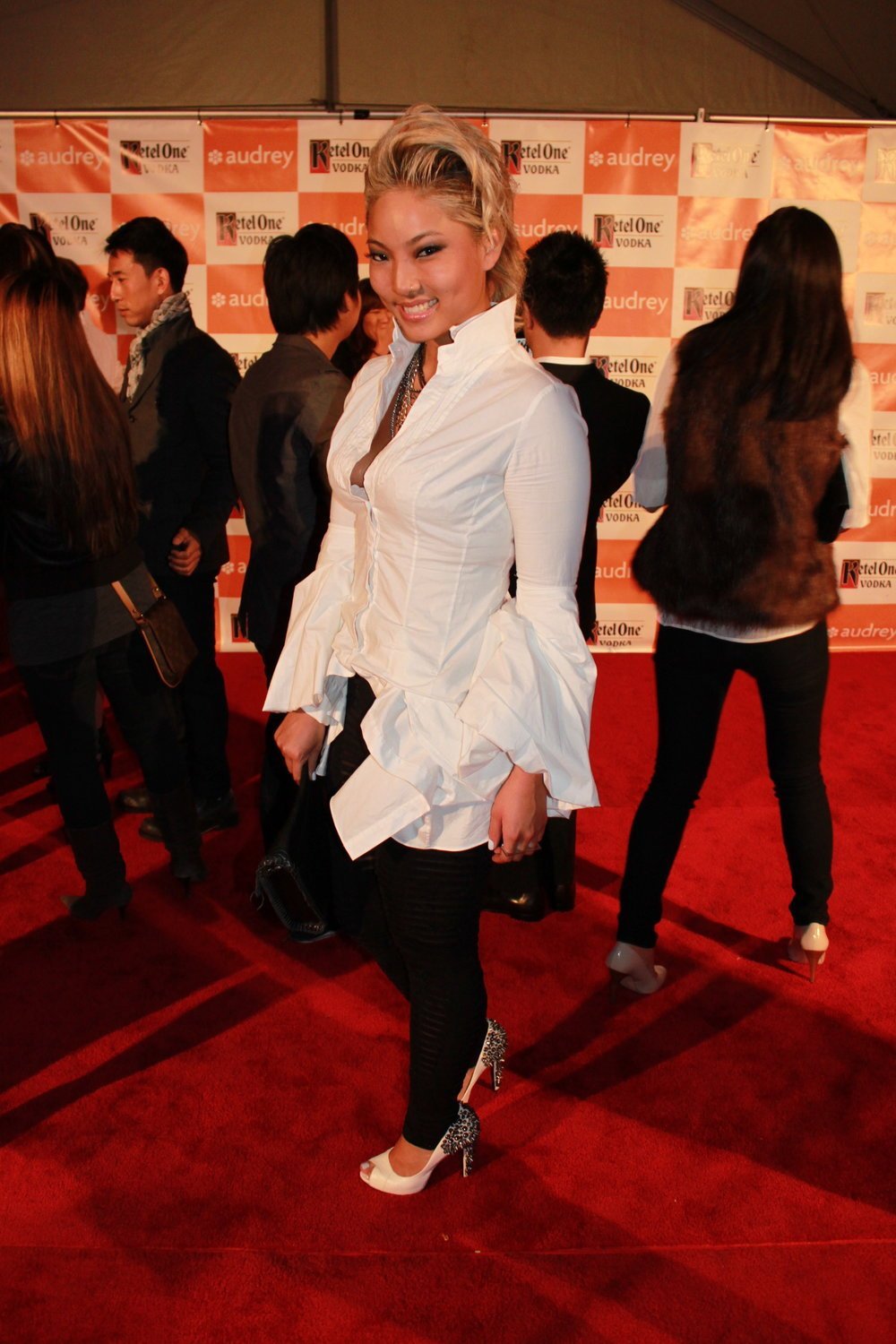 Last Thursday, Audrey Magazine, a lifestyle magazine for Asian American females, hosted their third annual Audrey’s Fashion Night Out at the Petersen Automotive Museum, displaying and parading a fine collection of young Asian American designers, models, celebrities, musicians, artists and fashionistas.
As I observed the red carpet arena, I found myself focusing on who had the cutest shoes, spying a pair of white stilettos with silver spiked heels. Mustering up the reporter in me, I asked the blond pompadoured woman who boldly wore white after Labor Day for a picture, which sparked a warm conversation between us. Jasmine Chang, a hairstylist for Sally Hershberger and a cast member on the K-Town reality TV show began to describe growing up in L.A.’s Koreatown and attempting to fit in in high school. Jasmine told me about the first time she tried to curl her eyelashes, using a plastic drugstore-bought curler. She ended up pinching her eye so hard that it started to bleed. In that moment, she began to think about beauty and its products, and how it was not centered around Asians, but around the majority white culture.

“I have a little sister,” said Jasmine. “We try to be each others’ support system.” She encourages young people to find outlets to cultivate their own individuality.

Stepping inside the main party tent, I was happily surprised to hear music spun by Amy Phamous from HM Soundsystem, along with simple video projections displayed. As I continued to wander around the room, eying the long line for the Stella Artois tasting booth, but choosing to stand on the dance floor, I stumbled upon Miss Teen Asia, Kaylee Calaguas.

“I’m a tomboy,” the young beauty queen revealed. “My personal motto is: ‘It’s impossible,’ said pride. ‘It’s risky,’ said experience. ‘It’s pointless,’ said reason. ‘Give it a try,’ whispered the heart,” Kaylee quoted, encouraging girls her age to reach after the goals of their heart, no matter the obstacles.

The main feature of the night was a fashion show with C.C. Couture by designer Carol Chen, with guest performances by NYC indie rock band Paper Doll and hip-hop dance troup Ivy League mixed into the catwalk production. While many of the models sported a permed, wavy, long-haired look, Chen’s use of purple crushed velvet paired with black leather inspired my soon-to-come fall wardrobe.

The last moment of Audrey’s Night Out happened in the powder room, as we ran into Carol on our way out. The talented, chic designer, surrounded by good friends, was emoting over the night. One of her friends said that if there was anyone to do it and get things done, it would be Carol. I stood there silently as I allowed those words to inspire my own creative vision for my artwork and life–and to just get things done.

Cheers to Audrey Magazine for inspiring Mochi girls all over the place!

A’misa Chiu is a freelance writer in Culver City, CA. Mochi was a media sponsor for Audrey’s Fashion Night Out. 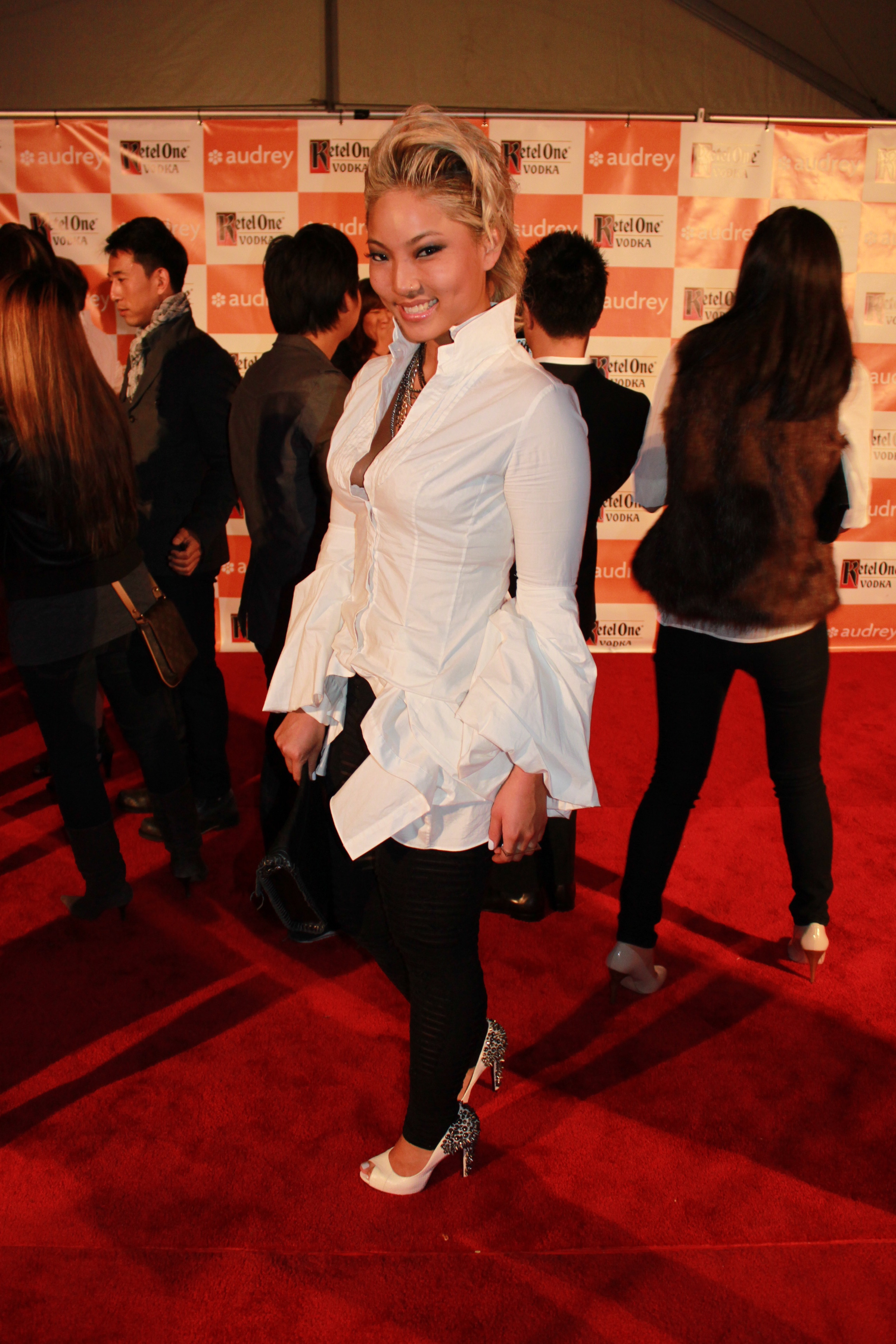