Sen. Daniel Inouye passes away at 88 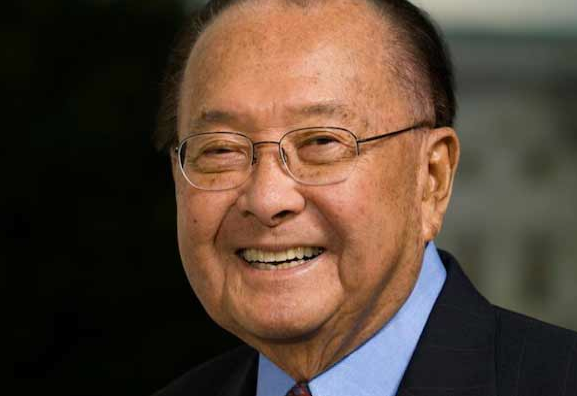 Sen. Daniel Inouye of Hawaii, president pro tempore of the Senate and the first Japanese American elected to Congress, passed away Monday afternoon at 88. Sworn into office in 1963, he was the second-longest serving senator in history and a World War II veteran. The Medal of Honor recipient served on the 442nd Regimental Combat Team, the most decorated regiment in United States military history, during the war.
Below is the statement on the passing of Sen. Inouye from Peter Boylan, Inouye’s deputy chief of staff:

His wife Irene and his son Ken were at his side. Last rites were performed by Senate Chaplain Dr. Barry Black.

He is survived by his wife, Irene Hirano Inouye, his son Daniel Ken Inouye Jr., Ken’s wife Jessica, and granddaughter Maggie and step-daughter Jennifer Hirano. He was preceded in death his first wife, Maggie Awamura.

Senator Inouye’s family would like to thank the doctors, nurses and staff at Walter Reed National Military Medical Center for the extraordinary care he received.

The story of Dan Inouye is the story of modern Hawaii. During his eight decades of public service, Dan Inouye helped build and shape Hawaii.

Senator Inouye began his career in public service at the age of 17 when he enlisted in the U.S. Army shortly after Imperial Japan attacked Pearl Harbor on December 7, 1941. He served with ‘E’ company of the 442 Regimental Combat Team, a group consisting entirely of Americans of Japanese ancestry. Senator Inouye lost his arm charging a series of machine gun nests on a hill in San Terenzo, Italy on April 21, 1945. His actions during that battle earned him the Medal of Honor.

Following the war he returned to Hawaii and married Margaret “Maggie” Awamura, and graduated from the University of Hawaii and the George Washington University School of Law.

After receiving his law degree, Dan Inouye, returned to Hawaii and worked as a Deputy Prosecuting Attorney for the City and County of Honolulu. He recognized the social and racial inequities of post-war Hawaii, and in 1954 was part of a Democratic revolution that took control of the Territorial Legislature.

Following statehood in 1959, Dan Inouye was privileged to serve as Hawaii’s first Congressman. He ran for the Senate in 1962 where he served for nearly nine consecutive terms.

Dan Inouye spent his career building an enduring federal presence in Hawaii to ensure that the state would receive its fair share of federal resources. He worked to expand the military’s presence on all major islands, stabilizing Pearl Harbor, building up the Pacific Missile Range and constructing a headquarters for the United States Pacific Command.

He has worked to build critical roads, expanded bus services statewide and secured the federal funds for the Honolulu Rail Transit project. He championed the indigenous rights of Native Hawaiians and the return of Kahoolawe.

He fought for the rights and benefits for veterans. Senator Inouye has left an indelible mark at the University of Hawaii, including support for major facilities and research assets. He has long supported local agriculture and alternative energy initiatives.

Dan Inouye was always among the first to speak out against injustice whether interned Japanese Americans, Filipino World War II veterans, Native Americans and Native Hawaiians.

After developing a reputation as a bipartisan workhorse, who always would put country above party, he was asked by the Senate leadership to chair the special committee investigating the Iran Contra Affair. This was after a successful tenure as a member of the Watergate Committee.

When asked in recent days how he wanted to be remembered, Dan said, very simply, “I represented the people of Hawaii and this nation honestly and to the best of my ability. I think I did OK.”

His last words were, “Aloha.”