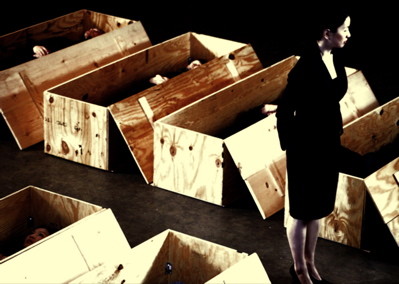 As we shed more light on the issues that many Asian Americans face today, including eating disorders, bullying and racism, sexual health, and attitudes toward plastic surgery, one topic that is often overlooked and not discussed enough is mental health. According to the U.S. Department of Health and Human Services Office of Minority Health, suicide is the 10th leading cause of death in Asian Americans in 2009. This staggering number of mental health-related deaths is proof that many Asian Americans suffering from depression and are apprehensive and hesitant to seek help. Erin Li, an up-and-coming Asian American filmmaker, uncovers the deafening effects of depression on Asian American women who suffer from it but gives perspective on how to start life anew in her latest film “L.A. Coffin School,” which was screened at the Directors Guild of America during the Los Angeles Asian Pacific Film Festival. The film follows the story of an immigrant Chinese grandmother who enrolls in a school that claims to help people confront their issues, pick up the pieces, and start their lives fresh.
“I wanted to tell a story about someone who had to confront her depression, conflicts, and fears about the future. Mental illness still carries a stigma in the United States and even more so among some Asian American women between 15 and 24, who consistently have the highest suicide rates among women in that age group. I hope this film creates awareness around these issues,” Li says.

Li says a huge life change inspired her to create the film, and through her research, she learned about the high rate of depression among Asian American women. Mental illness carries a stigma in the Asian American community, which is why Asian Americans are least likely to seek treatment for mental illness compared to Caucasians and other people of color. But why? There are several factors that play into it: Shame, embarrassment, and cultural stigmas play big roles. But for young Asian American girls and women, the pressures and stress of excelling in their studies coupled with finding a balance between homeland values and American values are some major factors.

“There are actual ‘coffin academies’ in existence. Companies in South Korea often enroll their employees in coffin academies as part of their orientation activities. The experience is supposed to help students view life with a new perspective and force you to confront what really matters and what you cherish in  your life, in order to graduate from the academy. This is one method that has been used to address the high suicide rate in the country,” Li adds.

During her research for the film, Li discovered “coffin” schools, where students enacted their own funerals in order to gain a new perspective. However, Li’s film explores depression in an older generation of Asian American women. Ming, the main character, is a renowned Chinese painter and teacher who is forced to leave her home in Taiwan and move in with her son in the U.S. Ming struggles to adjust to her new way of life, like many first-generation immigrants. But in the end, Ming finds new meaning in her life, which serves as an inspiration for Asian Americans to confront their issues head-on and seek help.

“I wanted to tell a story about someone who had to confront her depression, conflicts, and fears about the future. Elderly Asian women in the United States have one of the highest rates of suicide, the highest being women from the 65+ age group,” Li says.

To view the short for “L.A. Coffin School,” visit http://bit.ly/Mnr9I9. And, be sure to also check out Li’s new film “To The Bone,” a coming-of-age story about a pre-teen migrant farmer worker. The film will make its world premiere at the 2013 Slamdance Film Festival in Park City, UT this January. For ticket information, click here.