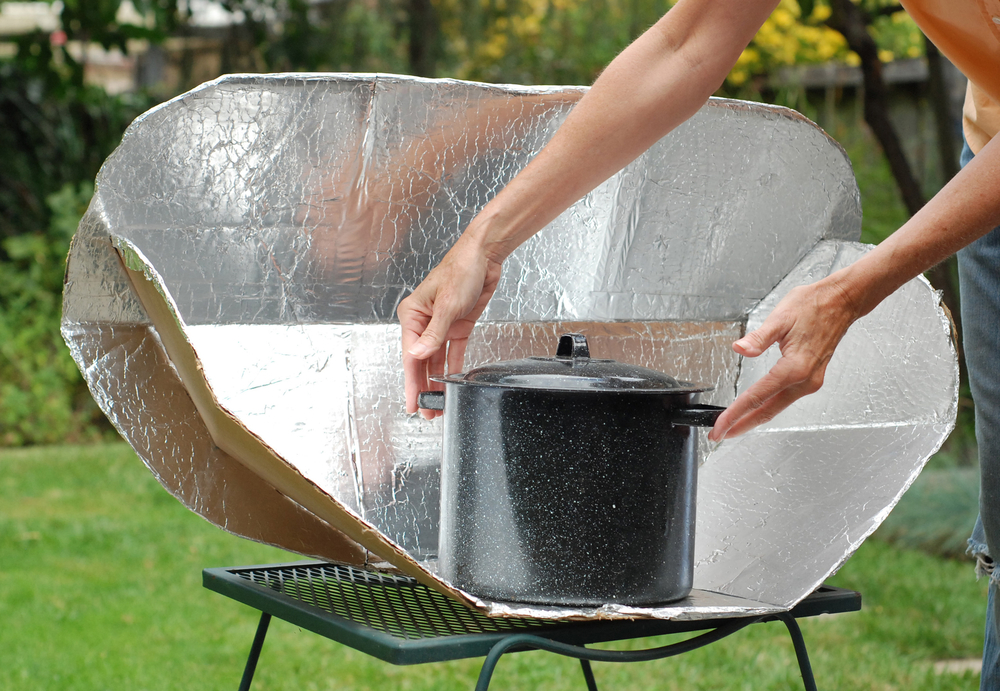 Instead of the usual summer barbecue, take a break from manning hot coals and greasy lighter fluid by trying your hand at solar cooking. Throw in your ingredients, then simply kick back in an easy, environmentally-friendly way of preparing yummy dishes everyone can enjoy.

What it actually is
The first solar cooker was invented in 1767 by Swiss naturalist Horace Saussure. It wasn’t until the 1950s that the device was developed more scientifically, an interest that was further sparked by the 1970s energy crisis. Today’s solar cooker can be used to bake, braise and stew, and consists of an enclosed pot in some form of insulator or reflectors.

The box cooker resembles an oven in capturing the sun’s rays in an insulated black box through a transparent lid, while the parabolic cooker focuses the rays under the pot with its curved shape. A third common form is the panel cooker, a combination of the box and parabolic designs.

How it works
In 2004, Solar Household Energy (SHE) designed the HotPot, a panel cooker that could be mass-produced without exorbitant costs. This system includes a 5-liter black-enameled steel pot that sits inside a glass bowl, covered with a glass lid, and with half an inch of space between the pot and the bowl. As panel reflectors direct the sunlight to hit the solar cooker, the black pot (as with any other black object) absorbs the sun’s energy and recasts that energy as infrared light, which can’t penetrate through glass like visible light. The glass bowl thus traps this extra energy in the space between itself and the pot, and brings the pot to a higher temperature that is necessary to cook food.

Why it’s amazing
The solar cooker isn’t simply a cool, green and no-fuss way to make food. Globally, the solar cooker is saving lives. It has been brought to camps in Chad, for example, home to more than 250,000 Darfur refugees who had to rely on fire for food and safe water. Not only does it help alleviate the millions of diseases and deaths stemming from unclean water, the solar cooker also allows women and children in particular, stay in their camps outside of which rape, attacks and death are likely possibilities. This method also renders health issues associated with smoke and physical labor (from gathering wood) less likely. Even if all these people have is the pot system, reflective panels can be made of any shiny scraps like gum wrappers. Ultimately, the solar cooker is an incredibly innovative way to lend those in developing countries the ability to survive on their own with few resources at their disposal.

Why you should try it
Though it probably won’t play a role as impressive as a lifesaver in your backyard, a solar cooker can still be a safe, thrifty and convenient way to cook. This method requires no fuel, which makes the kitchen a little cooler – and the bills a little lower – and gives our planet’s fossil fuels a break. It is also suggested that solar cooking is in fact healthier, as lower temperatures can preserve more nutrients. But the best part is that there is only one step to solar cooking: throwing ingredients into the pot. Stirring isn’t even necessary.

The one tricky factor in solar cooking, however, is that it does after all depend on the sun. Depending on the weather and the time of the year and day, dishes can take about twice as long to cook on average. For a rough guide, a liter of water can boil and a cake can bake in an hour, while four pounds of chicken can cook in two.

But once you start experimenting and begin to develop a better grasp of your timing, the options  are great. Whether its banana bread (2 hrs), quiche (2 hrs), spare ribs (3-4 hrs), or pork chops (2-3 hrs), the solar cooker can do it all. Toss together some ingredients, cover the lid and let infrared technology do its magic as you sit back and enjoy the rest of your summer.

You can get your very own HotPot solar cooker at Gaiam, a group that makes eco products available to the masses. Be sure to als0 check out the solar cooking wiki for recipes and for cooking tips.