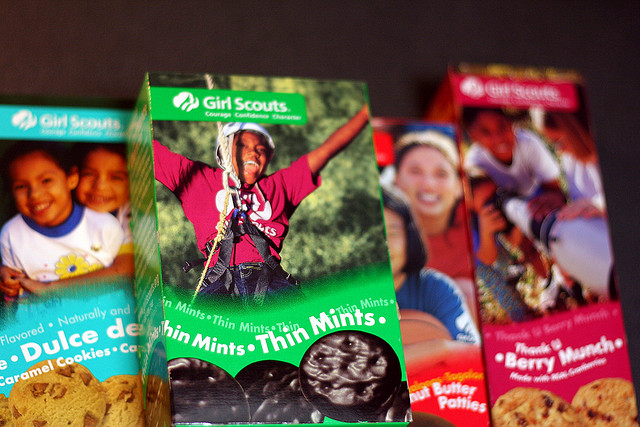 The mouthwatering flavors of Girl Scout cookies aren’t a very hard sell, and the fact that the proceeds go to a great cause only sweeten the deal. I’ve had co-workers send mass emails about selling their daughter’s Girl Scout Cookies and friends who bring boxes of these addictive treats at parties, but outside of a medical marijuana clinic?
Leave it to Danielle Lei, a smart cookie herself, and her mother, Carol, to sell 117 boxes of these irresistible goodies in just two hours this past President’s Day outside of The Green Cross, a medical marijuana clinic in San Francisco. Patients with the munchies could get their fix on their way home with Tagalongs, Thin Mints, and Samoas.

Although the mother-and-daughter team has sold Girl Scout cookies outside of medical marijuana clinics before, this was their first time at The Green Cross. Carol says she used this opportunity to teach her daughter about the good and bad uses of marijuana: Using marijuana as a medical treatment to help ease symptoms of cancer, HIV, multiple sclerosis, and other health conditions versus using marijuana to get high.

Danielle and her mother have gotten the support of The Green Cross and the Girl Scouts of Northern California, but others have frowned upon their sales. We, at Mochi, however, think it’s absolutely genius.