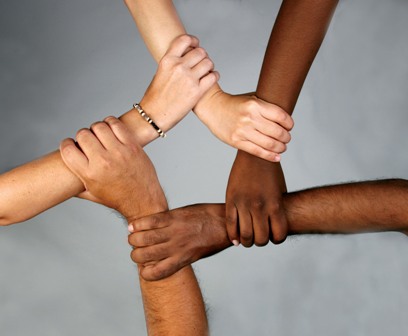 I am hapa. With an Asian American father and a Caucasian mother, I am evenly split between two worlds. Rather than a fixed 50/50 percentage, I feel like I’m on a spectrum, constantly shifting back and forth between cultural extremes. The shift isn’t always smooth, either—sometimes my two halves go hand in hand, but just as often, they conflict.

I was 11 the first time I realized that the two cultures forming my hapa identity weren’t getting along. My Caucasian grandmother had accompanied me to a Vietnamese-run nail salon so I could get a manicure. Curious as to why my grandmother only stayed around the front desk area the entire half-hour we were inside, I asked her why she didn’t get her nails done as well. As we walked out of the salon, she scoffed, “I don’t trust Asians to do mynails.”

After her remark, my shiny pink nails didn’t seem so cute anymore. I just wanted to get out the nail polish remover and scrub away the entire experience. Why was the salon good enough for me, but way beneath her? And if Asians weren’t good enough for her, was I? With my grandmother putting down one of my identities, for the first time I felt like I couldn’t be both Asian American and Caucasian at once—I had to choose a side.

As I’ve gotten older, the actual hurt from that experience has long faded. After all, it was only one day out of many. However, it wasn’t the only time I’ve had to make a choice between the two cultures. In comparison to that one-day experience, my drama with religion has lasted my entire life.

For me, religion has never been much of a cozy, unifying, family-gathered-round-the-Christmas-tree experience. My mother was raised Jewish; my father Buddhist. Instead of celebrating and appreciating both religious traditions, holidays became a way of pulling us apart. It meant picking one side of the family to spend time with, and not the other. To be honest, I was never sure how to even begin to try to bring the two sides together. I don’t have equal knowledge of both religions (as I was raised Jewish), and there’s not much of a choice now that my dad has adopted certain Jewish beliefs. Sometimes I wish they were more merged, but the traditions in my family have been set.

By the time I started college last year, I thought I had finally figured everything out. I knew I wanted to study computer science. I knew I wanted to live in the dorms. I knew I didn’t want to be known as “Asian.” My goal to separate myself from my physical identity (I only look Asian) failed. My first friends were Asian Americans. The first club meeting I attended was for an Asian American group. I had picked just one side to identify myself with, and I couldn’t figure out a way to be seen as a sum of cultural parts. This was the first time I was living in a place where being of mixed race wasn’t the norm. In my hometown in Hawaii, almost everyone was a mix of cultures. At my college campus, however, it seemed as if everyone was either one thing or another. With no multicultural groups (other than Pan-Asian ones) available to me, I felt the need to figure out one identity to belong to. I’ve found a lot of good friends, and I’m happy with where I am, but I still don’t feel balanced. I want to be known as a mix, as a hapa, not having to pick one side over the other.

I am hapa. That sentence is so easy for me to write, but trying to make it describe my life is so much harder. For me, to be hapa is to be balanced between two (or possibly more) cultures. It is a goal to work toward and an adjective to live up to. I can’t say for certain if I’ll ever be able to achieve it, but it has and will influence my identity and life wherever I go from here.