My Story: Growing Up Asian American in Hawaii 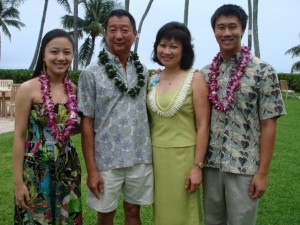 My identity crisis starts with being a sixth-generation Chinese and third-generation Korean American. This may sound unique to the general population, but it is actually pretty common in the beautiful state of Hawaii, where I grew up. My paternal great-great grandfather left southern China with his brother to pursue the California gold rush in the late 19th century, but their boat made a stop among a certain island archipelago in the middle of the Pacific Ocean. That stop turned out to be fate—let’s just say they caught “Island fever,” and my family has been there ever since.

Aside from being multiple generations removed from my Chinese and Korean relatives who immigrated to Hawaii, I grew up strongly influenced by various other ethnicities and cultures in Honolulu as well—Japanese, Filipino, Korean, Samoan, Hawaiian, Haole (Hawaiian slang for “white”), Vietnamese, Portuguese and more. A metaphor that Alan Brennert uses in his novel, Honolulu, perfectly illustrates this combination of backgrounds:

“Hawaii has often been called a melting pot, but I think of it more as a ‘mixed plate’— a scoop of rice with gravy, a scoop of macaroni salad, a piece of mahi-mahi, and a side of kimchi. Many different tastes share the plate, but none of them loses its individual flavor, and together they make up a uniquely “local” cuisine.”

So while I did grow up perceptive of other cultures, I never fully identified with my own ethnic identity. Sure, my family would celebrate Asian holidays and eat Asian foods, but that was the extent of it. My parents do not know a word of Chinese or Korean, and my own grandparents speak fluent English and are losing touch with their native language. In addition, I’ve never considered my own parents traditionally Asian. They’ve always been very laid back and accepting, with all of the pressure to succeed and study hard coming from myself. On my own volition, I started taking Mandarin in middle school because learning the language seemed like the natural step in order to get in touch with my roots. I loved it and finally felt confident that I was connecting on a deeper level with my background.

Now, however, I understand that learning Mandarin is a far cry from truly understanding the culture. Going to California for college was a huge cultural and identity wake-up call for me. I instantly felt “less Asian” when I made friends with other first or second generation Asian Americans. Aside from being bilingual in English and their native tongue, many of them had been to Asia multiple times – I have never been – and they seemed to more confidently relate to their backgrounds.

This divide became jarringly clear during a specific episode of cultural misunderstanding in my sophomore year of college. For Christmas, I bought my Taiwanese boyfriend’s mom a beautiful koa wood clock for the new home they had just moved into. I was astonished and taken aback when she told me she did not like the gift. She told me that clocks are symbols of death in Chinese culture and are not generally acceptable as gifts. I was hurt—I had picked out the clock with my mom and thought it was beautiful—but also frustrated that my own family and I could be so culturally ignorant.

Looking back, I realize that there are significant lessons I can take away from the situation. I have to be more observant of other cultures, but at the same time, be easier on myself for not understanding something. I could not possibly have known clocks were bad luck unless I had researched “things not to buy Chinese people” on Google, which seems like a bit of overkill when purchasing a simple gift. However, that predicament taught me a good lesson as well—to be mindful and open-minded. I’ve also learned that it is impossible to mold myself into being “more Asian.” What I can do is always keep learning and be comfortable in my own skin.

Now, I’m working on my Mandarin skills by minoring in Chinese at USC, and I plan on studying abroad in China next year to truly immerse myself in a new surrounding. Maybe I’ll have an epiphany of some kind, but for now, I know that it is okay to be a little unsure of my own identity.

Even though I never knew my predecessors that immigrated to Hawaii, I’m incredibly thankful. If it weren’t for them, I wouldn’t have had such a privileged and culturally stimulating childhood growing up in the “aloha” state. I realize now that I really am a mixed plate: Chinese, Korean, American and ‘Hawaiian’ at heart—not just one of them, but all the parts put together.

When Mochi Staffers Knew They Made It